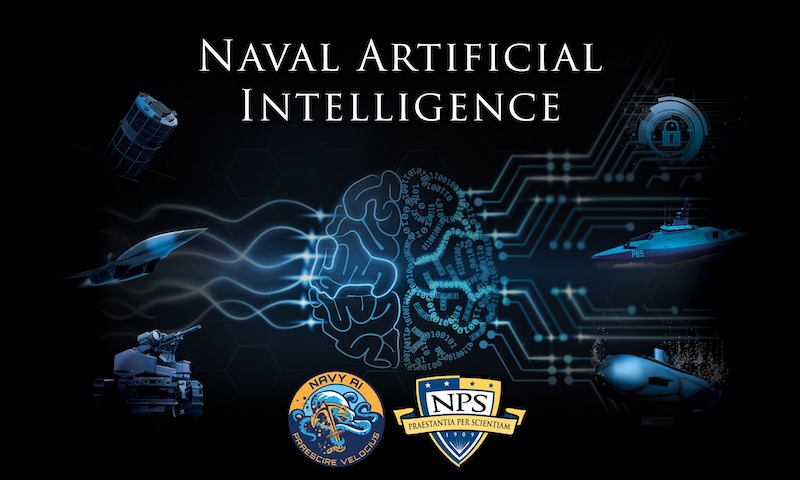 Decision Advantage is one of six force design elements and will be enabled by AI as stated in the Chief of Naval Operations’ NAVPLAN 2022. These AI Summits are held to tighten the connections between Naval AI enablers, practitioners and users, as well as grow the Naval AI community into a platform for accelerated AI deployment supporting the Navy’s highest priorities.

“We focused attendees time on planning Naval AI training and education, AI/machine learning (ML) operations deployment pipelines, and AI Fusion, a concept for the operational deployment of AI in service to distributed maritime operations and the hybrid fleet,” said Vaughn. “NPS has been instrumental as a central connector and helping us develop a blueprint for a Naval AI organization and governance structure.”

U.S. Marine Corps Maj. Jack Long, PhD, a Marine Reservist at the Office of Naval Research and Deputy Navy Chief AI Officer, introduced summit attendees to the current state of AI in the Navy and began the discussion of future trends to shape impactful Naval AI development and deployment. The Navy and its AI Task Forces were joined at the summit by partners from the U.S. Army, U.S. Marine Corps, U.S. Coast Guard, the Defense Intelligence Agency, the Joint Staff and the Chief Digital and AI Office (CDAO)..

“We think AI is widely applicable to warfare, so we want to make sure the Naval services and the DoD in general are able to efficiently harness this emergent and disruptive tool. It's important that we are ready to use it for our own purposes, whether in warfighting or corporate functions, and be ready to have it used against us,” said Long.

With discussions held at varied classification levels, a significant part of the summit focused on skills that the Navy and Marine Corps will need to channel this capability. Past innovations like submarines and aviation have reshaped naval warfare, with each invention requiring new doctrine, equipment, and personnel to support it. As the required skills become more specialized, those personnel have required new career paths to allow them to become masters at their crafts.

The Navy must learn to operate at the speed of AI. As expertise becomes internal, the Navy will need a workforce capable of coding, building models, and harnessing AI in a similar fashion to how Sailors once had to know how to use a sextant. AI application would become part of basic seamanship. Alternatively, the Navy could rely on industry and contractors to bend AI to the Navy’s purposes in much the same way as the service has them build ships.

This summit started the conversation on what the services will need to have about how they define their core competency and what they choose to not do.

“Right now, there's a small cadre of people in the Navy that have thought about this extensively,” said Long. “Before the CNO or CMC sign off on strategic AI decisions, a much wider group must be engaged. Ultimately this is a conversation about the future identity of the Services in an age of digital warfare.”

Some of these conversations will inspire projects and partnerships that will be realized through a Naval Innovation Exchange (NIX) led by Dr. Mathias Kolsch at NPS. Kolsch is working to tie the summit, courses and research together.

“I am figuring out the ideal workforce composition for AI/ML involved projects, and the AI Summit also informs me how to do that,” Kolsch explained. “I meet and talk to these people. I see where there are successful projects and begin asking questions. How many are listed here for this? What do they know? Can they code? … What are the skills needed for this project? So, this summit informs the NIX.”

Cooperative planning for the next Naval AI Summit in March 2023 has already begun, and Kolsch plans to offer a version of the popular “AI for Leadership” course specifically designed to support active general officers, flag officers, and Senior Executive Service civilians during the same week.

NPS is currently a center of gravity for advanced AI training and education within the Naval Education Enterprise. If the NCAIO and Long have their way, that role will grow in the near term. At the crux of research and operational experience, NPS is an ideal center for AI advanced education and implementation.

“The vision of accelerated Naval AI training and education, anchored at NPS, closely resembles the role of Top Gun for Naval Aviators. NPS as a center for advanced AI training in much the same way pilots go to flight school and then later in their career go back for advanced training to keep current and learn how to employ the craft at the pace of industry and adversaries,” said Long. “That's the core role that we see NPS playing in the coming years – the central hub for the diffusion of AI knowledge across the Navy and Marine Corps.”

Since inception of the program, the AI Summit continues to grow and evolve. What began as an ambitious effort of less than a dozen practitioners has grown by orders of magnitude. And it’s a number that will surely grow as the Navy and Marine Corps further embrace the widespread applications of AI, and the necessity to evolve and innovate at great speed and scale. NPS will continue to play a leading role in AI education, research and innovation with the next AI Summit scheduled for March 2023.