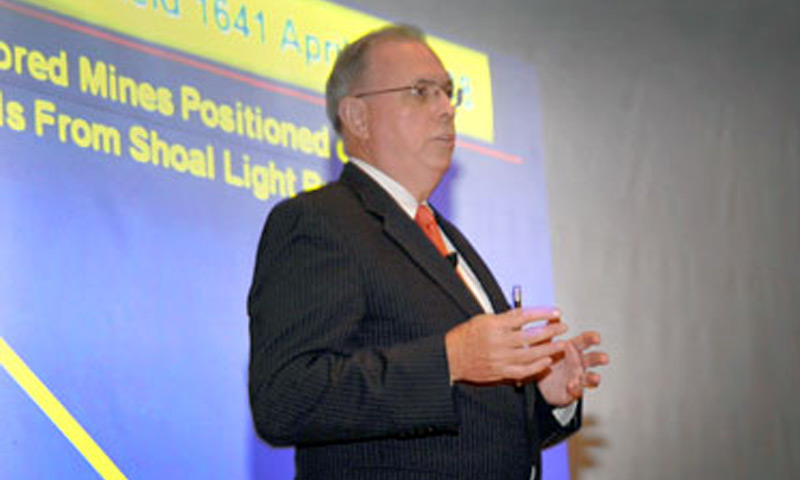 Capt. Paul Rinn, USN (Ret.), 1st Commanding Officer (CO) of the guided-missile frigate USS Samuel B. Roberts, describes the position of the mines around his ship on April 14 1988 before the ship struck a mine at a Naval Postgraduate School (NPS) Secretary of the Navy Guest Lecture Series (SGL) Aug. 3 in King Hall.

Retired Navy Capt. Paul Rinn was the first Commanding Officer (CO) of the guided-missile frigate USS Samuel B. Roberts, and he had quite a heroic story to share when he spoke to students and faculty during a Naval Postgraduate School (NPS) Secretary of the Navy Guest Lecture Series (SGL) in King Auditorium, Aug. 3.

Capt. Rinn was the CO of the Roberts when she struck a mine in the spring of 1988 while on escort duty in the Persian Gulf. Rinn spoke to an attentive audience of NPS faculty and students about his experiences during the event and of the value of training and tradition during life and death situations under unforgiving conditions.

“What a great honor to come to the place where the Navy studies technology and get to talk to the future of the Navy and the armed forces,” said Rinn during his introduction.”

Rinn went on to give a detailed account of the events that lead up to the incident that left his ship crippled and almost unsalvageable, and of how with few resources and even less time his crew was able to save the limping ship.

“So what’s my job today,” asked Rinn. “My job is to tell you a story. It’s a story of bravery. It’s the story of the Samuel B. Roberts.”

He pointed out that while technology gives a great advantage in the trials of war we should not forget about the importance of the person-technology interface, making note that what saved the ship in the end was a combination of a well-trained crew, good decisions and heroic actions. He emphasized that training and development, whether in a classroom or a trainer, can make tremendous difference in the outcome of events.

The Samuel B. Roberts, at the time, had a crew of 220 sailors from different backgrounds and places of origin, with varying levels of education and very minimal experience – 67 percent of the crew had never been out to sea and another 20 had only one tour under their belts, said Rinn.

“It was a real challenge,” said Rinn. “I personally had been a 1,200-lb. steam sailor on frigates in the Navy so getting underway the first day to go down the Kanabec River without the pilot was an exciting evolution.”

Retired Navy Capt. Paul Rinn, 1st Commanding Officer (CO) of the guided-missile frigate USS Samuel B. Roberts, shows an illustration of what the ship looked like after hitting a mine on April 14, 1988 at a Naval Postgraduate School Secretary of the Navy Guest Lecture Series, Aug. 3 in King Auditorium. Capt. Rinn was the CO of the Roberts when she struck a mine in the spring of 1988 while on escort duty in the Persian Gulf.

With very little time to get his crew up to speed, Capt. Rinn initiated an intense training regimen of constant cross training for all of his crew.

“We had repair lockers that had cooks, Intercommunication Specialists, and Radiomen,” said Rinn. “Everybody that you wouldn’t expect in an engineering space but that’s where they were on April 14, 1988 and those are they guys that saved the ship.”Fourteen months after its commissioning, the ship had gone through sea trials, completed a rough trade training in Guantanamo, which the crew completed with an outstanding grade and the best engineering inspection that had occurred in the Atlantic Fleet in three years, said Rinn.

The situation in the Gulf at the time, however, was also very difficult. It was at the height of the Iran-Iraq war. Oil tankers had been attacked in the Persian Gulf by Iranian speedboats and the USS Stark had suffered an attack from an Iraqi jetfighter, which left 37 sailors dead.

The tensions where high but by the time leading up to the mine incident the crew had already completed more than a dozen escort convoys in and out of the Persian Gulf, nevertheless the captain kept his guard up, constantly watching the horizon and challenging any vessel or aircraft that could possibly pose a threat.

After escorting minesweepers out of Kuwait and on their way out of the area the captain received a report of mines only yards away from the ship.

After confirming the threat, he gave the order to back the ship out of the area and the crew to their general quarters stations but to remain on the upper decks as a precaution.

“I think we’re in a minefield,” Rinn recalled stating to his crew. “I want you all to go to your general quarters stations but get up above the main deck I am not going to set off the alarm, I don’t know if they’re acoustic mines. I want you to come up as fast as you can, report when you’re there and set zebra on the way, I’m confident we can get out.”

Unfortunately, 25 minutes later their quiet escape would be halted.

“I experienced the largest explosion of my naval carrier,” said Rinn. “I was standing on the starboard bridge wing 140 feet from the explosion, it broke my left foot. It shattered everything horizontal on the ship; it lifted the superstructure of the ship up in the air and brought it crashing down. I had to put my head far back to get a look at the flames; the fireball was easily 100 ft. above the ship. We didn’t know it at the time but we had a 20-foot wide hole on the side of the ship.”

And that was only the beginning; the ship had suffered even more tremendous damage. The award-winning engineering room was completely destroyed causing the ship to lose power. The fire main needed to fight the fires that were already engulfing most of the ship and the diesel engines that were supposed to restore power had been lost or severely damaged.

Seven men were severely burned and 57 in total were injured and the ship was sinking at a very high rate. “It was a bizarre experience,” said Rinn. “I could look up and see the fire burning above me and my shoes where filling with water at the same time.”

Finally, Capt. Rinn made a risky decision and ordered the crew to stop fighting the fire and concentrate on the water. He told a group of men in charge of stopping the flooding in the Auxiliary Machinery Room, “You have to save that bulkhead or we’re gonna lose the ship.”

Suddenly the flickering lights lit up as if the ship caught a second wind. Mike Tilley, a sailor known more for getting into trouble than for being a hero, fired-up the last functional diesel engine restoring power to the ship.

Slowly the crew started winning back the ship, with the power restored and the flooding contained they were able to concentrate on the fire.

During his presentation, Capt. Rinn showed a picture of the crew on the flight deck of the Roberts taken by a news helicopter out of Dubai two days after the mining of the ship. It showed a group of men in tatters with smiles on their faces, spirits high giving thumbs-up to the camera.

“This is a picture taken 48 hours after the mining of Roberts,” said Rinn. “Not prompted, not posed nor choreographed. That’s the thumbs-up of a crew after they had fought for their lives. They were proud of themselves very self-confidant. They had a sense of who they were but the most important thing you want to take from this picture is, ordinary individuals can accomplish extraordinary feats if they are well trained and led as well as given a sense of focus and purpose. That was the whole premise behind Samuel B. Roberts, that was the whole thing we were trying to do – make your people believe that they can do better than they ever thought they could do and then execute that.”

Several times during the ordeal Capt. Rinn was asked if he wanted to abandon ship, and he refused repeatedly. Later, when asked why he wouldn’t he said, “Commanding Officers are not given ships in the United States Navy to surrender them or give them up, we’re there to fight for them!”

For his actions during the attack, Capt. Rinn was awarded the Legion of Merit with Combat "V" and he received the U.S. Navy league John Paul Jones Inspirational Leadership Award. He went on to serve in major commands including Commanding Officer, USS Leyte Gulf (CG-55), a Ticonderoga-class named for the battle in which USS Samuel B. Roberts (DE-413) was sunk. He retired from the navy in 1997 and became an executive in a consulting firm.

SGL lectures allow NPS faculty and students to listen to important guest speakers that have valuable knowledge or experience in particular fields. They are scheduled at regular intervals throughout the year with the purpose of helping students and faculty relate their learning and research to real-world applications in their respective fields.