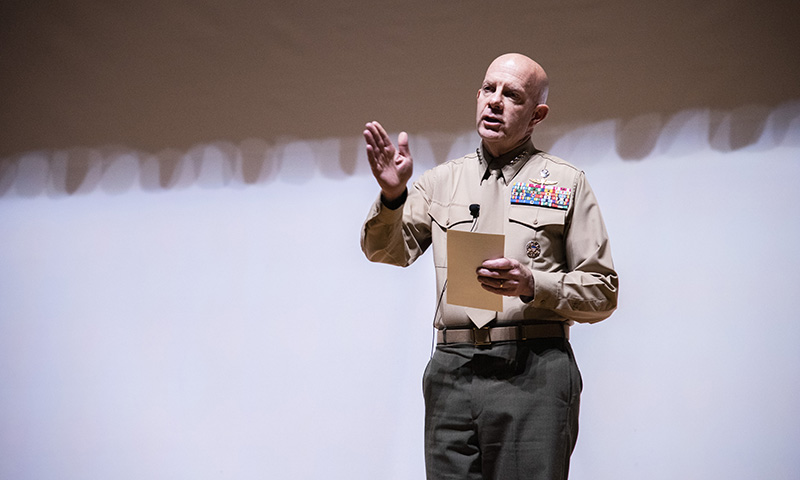 Commandant of the Marine Corps Gen. David H. Berger talks about the current and future shape of the force to Marines studying at the Naval Postgraduate School and nearby Defense Language Institute Foreign Language Center during the latest Secretary of the Navy Guest Lecture held on the university campus, Dec. 5.

Berger wanted to see the Marine Corps’ investment in education first-hand, and to see how student research is addressing critical service challenges. The visit also provided him with a chance to personally interact with the NPS Marines as well as those of the nearby Defense Language Institute Foreign Language Center.

One of Berger’s five priority focus areas as outlined in the “Commandant’s Planning Guidance” – the strategic direction for the Marine Corps – is education and training. According to the guidance, which places an emphasis on being a successful learning organization able to think, innovate and change, Marine Corps innovation needs to use wargaming, experimentation and modeling & simulation (M&S) to test and refine ideas and concepts translating them into action – which are key NPS education and research capabilities.

“Your Marine Corps and your naval force are built perfectly for about 1990,” said Berger in his SGL address. “If there were another Desert Shield or Desert Storm, which I was in, we’re built for it. But we’re not optimized today for gray zone competition that’s below the threshold of war or open conflict against our pacing threats.

“Add to that the fact that China, Russia and Iran have watched us operate on the playing field for the last 20 years, and they’ve learned a lot about how we operate,” he continued. “As they stretch their naval forces, we need to make some foundational changes to our force to undertake a new way of fighting. The foundation of our strategy must be deterrence, and deterrence in the future maritime environment – the counter and stabilizer – is a strong naval expeditionary force.”

While he has a plan for where the Marine Corps needs to go in the future, Berger said, the solutions on how to get there come from the bottom up.

“You’re here to study, thinking about the product, process and solutions we need,” said Berger. “None of us know when or where the next conflict will be, but someday you may get the call to go someplace you may not be prepared to go. We need you at the next level, so I challenge you to put your nose to the grindstone so you’ll have enough built up here to face something head-on later.”

Exploring many of those future solutions through student research, NPS Marine Corps students are key players in the development of those “bottom up” solutions.

“Our Marine students are very familiar with the challenges and problems that Marines in the fleet are facing today,” said Deputy Senior Marine Corps Representative Lt. Col. David Forbell. “Combining tactical experience with an NPS education gives these Marines the tools to research and find solutions that have a real-world impact on the Marine Corps today, which is what the Commandant got to see and experience first-hand here at NPS.”

Berger’s tour of the MOVES Institute, which the Marine Corps has sponsored since 2015, demonstrated a small piece of that cutting-edge research with direct impact back to the fleet. Virtual reality simulations that more accurately evaluate differences in human behavior, especially in application to wargaming scenarios, was just one of several student projects reviewed.

“One of the great things about NPS is how graduates who have been in the fleet, and have observed problems, can reach back to bring up those problems for the faculty and students to work on,” said MOVES Institute Director Dr. Imre Balogh.

Following the MOVES tour, Berger listened to additional student research briefs on topics such as the One-China Policy, predictive success in officer training programs, and the analytics of enhanced lethality and marksmanship.

“One of the challenges we have as a Marine Corps is, when a student finishes his or her research project, the knowledge they have gained, or the solution they have evaluated, needs to get back into the hands of the Marine Corps organization or fleet unit who needs it so they can potentially apply it,” said Forbell.

With one of the Commandant’s focus areas being education, Forbell continued, this is a critical step in maximizing the value of the Marine Corps’ investment in these students, and in NPS.

Berger’s feedback on the feasibility and potential application of each thesis brief encouraged the students to continue their work. Berger later expressed his appreciation and thanks to the Marines in helping him understand what NPS is all about.

“Thank you for helping me understand what this place is all about and what I need to do to support it,” said Berger. “[Our] biggest weapon system is right between your ears, and this year, you’re adding to it.

“Chances are, sometime during your career, you will be in a unit that gets the call to go ... That’s when all of it comes together. This year is your prep time. Fill your mind so when you see something later on, you’ll have enough built up there to know you’ve seen something similar,” he continued. “Let’s go, let’s move, and don’t hesitate, because Marines do not hesitate. I am very proud to serve in your ranks.”