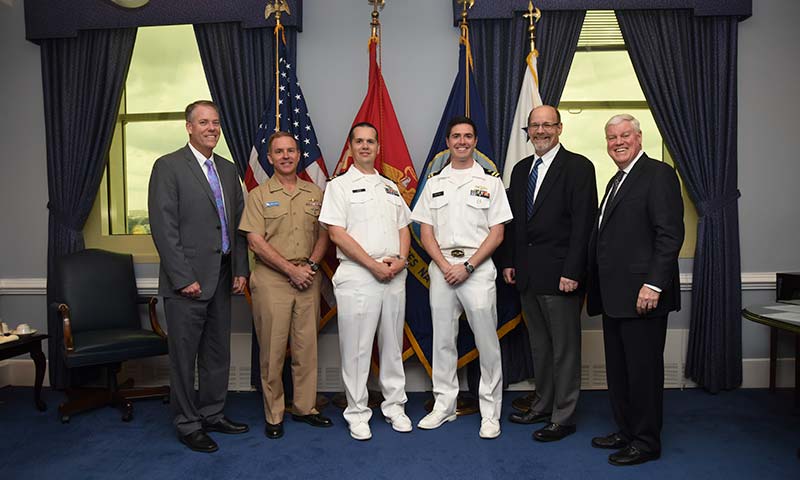 As part of their selection as NPS Graduate School of Business and Public Policy Conrad Scholars, Naval Postgraduate School (NPS) students Lt. Cmdr. Matthew Lorge and Lt. Tim Whitney traveled to Washington, D.C., to provide briefs on their research to members of the Navy’s Financial Management and Budget Directorate.

Lorge and Whitney’s research is in direct support of the Office of the Assistant Secretary of the Navy (Financial Management and Comptroller), and their thesis topics were selected to address issues of importance to DOD’s financial management community.

Lorge’s thesis, “A Comparison of Acquisition Efficiency Between the U.S. and China,” was based on a topic provided by NPS’ Acquisition Research Program.

“My thesis seemed to be received well. There were a lot of good questions asked and several of the attendees complimented the presentation and thought it was insightful,” said Lorge.

Lorge’s research examined China’s substantial investments in their modern naval systems, and its role in the execution of the nation’s strategic goals.

“In order to understand how successful China has been in its efforts to modernize its growing shipbuilding facilities, an understanding of its acquisition system is required,” Lorge said, pointing to a lack of standard methods for comparing the efficiency of acquisition systems for China, or others for that matter.

One of the goals of Lorge’s research was to develop a framework that can be used to accomplish this, and to then apply that framework to the U.S. and China ship-building programs.

“This indicates that although the U.S. has a more efficient acquisition system overall, China is still able to produce warships faster and at a lower cost. And in order to maintain its strategic advantage on the world stage, the U.S. must work to ensure that its acquisition system remains ahead overall and closes the gap when it comes to cost and schedule.”

As a submariner, Whitney served more than three years on USS Pittsburgh (SSN-720) as Reactor Control Assistant, Main Propulsion Assistant and Operations Officer. And late in his tour, he was hand-selected to fill a department head role, a rarity as a junior officer and an indication to his leadership abilities.

“My thesis analyzed data from submarine maintenance, engineering, planning and procurement in the form of ‘Autopsy Reports.’ It is the second in a series of MBA projects that will aggregate into a greater COMSUBPAC research project,” said Whitney.

“The purpose of this iteration of the project is to determine what factors impact 688 Class submarine maintenance costs and delays. By analyzing how the amount of direct man-days executed during an availability changes with respect to time, hull age, availability length, and operational interval length, my thesis establishes a way forward for follow-on analysis in the greater research project,” added Whitney.

Ultimately, Whitney found that maintenance delays are most likely due to inefficient utilization of labor, perhaps caused by an inexperienced labor force and unexpected new work which arises during the availability.

“The results of my research should help to open more opportunities for NPS students to conduct research on this critical topic,” said Whitney. “My thesis was generally well received. Rear Adm. Crites believes that it’s a good start to the general research effort, but suggested that even more research by NPS students will be needed in order to solve the problem.”