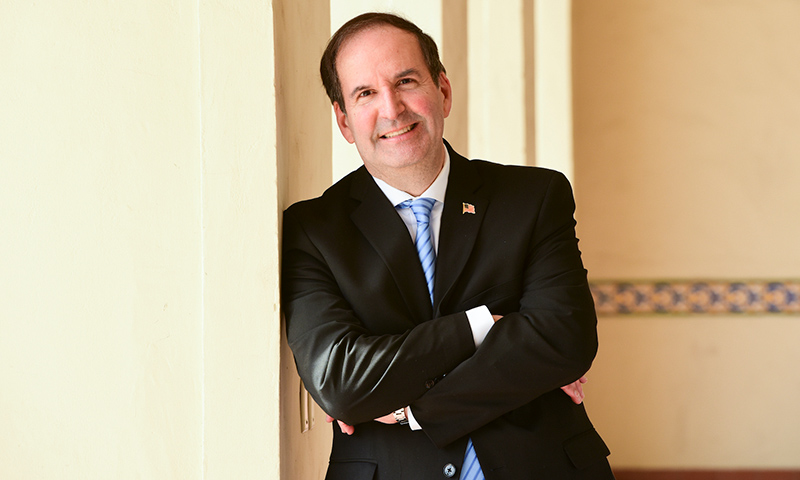 The NPS community welcomed Dr. Scott Sigmund Gartner to campus as he officially assumed the position of Provost and Academic Dean, March 1. With past experience as a visiting professor and instructor at NPS, Gartner joins the university with a deep appreciation for its unique mission of defense-focused graduate education and research.

The Naval Postgraduate School (NPS) and its community of students, faculty and staff welcomed Dr. Scott Sigmund Gartner to campus as he officially assumed the position of Provost and Academic Dean, March 1. Gartner, a political scientist and expert in international security, comes to NPS from Penn State University where he served as director of the Penn State School of International Affairs and was Professor of International Affairs, Law, Engineering Systems and Political Science.

Gartner is no stranger to NPS or its unique mission of defense-focused graduate education and research. As a visiting professor and instructor at NPS, he taught and advised students on critical geo-political topics, but this experience also created a gravity to the university’s mission that drew him back to NPS.

“I can’t think of a mission that’s more important than educating our officers, particularly our Naval officers,” said Gartner. “Naval officers need to make decisions independently and rapidly, with the security of our nation and their Sailors in mind. I can’t imagine a more important impact on the force.

“NPS serves as an interdisciplinary bridge between the academic and applied worlds in a way that uniquely supports the Navy and Joint Force,” he continued. “What I think interested me most in 2014-15 was the amazing people and sense of community here. The people were really the strongest draw for me, and I feel very privileged to be a part of NPS.”

As Provost, Gartner believes NPS is a vital research resource for the DOD as it bridges both STEM and non-STEM disciplines. Students at NPS have the ability to fulfill core coursework in their technical disciplines, but then also have the opportunity to understand the strategic context of what they learn, he explained. And it works both ways, with non-STEM disciplines understanding the technical side as well, he added.

Gartner says he would prefer to be familiarizing himself with the university campus and community as it would ordinarily operate. Although that’s difficult during the COVID environment, it does not mean he’s not accessible.

Gartner has already started putting his thoughts and ideas into practice, expanding opportunities for student input and thinking about how alumni engage with NPS following graduation.

“The student voice is very important to me and I’d like to see us expand it,” said Gartner. “I’m already working to put students on committees. I’m also in discussions with the NPS President and the Alumni Association and Foundation about how we can support our alums after they leave. We should think of our students as both lifelong learners and lifelong teachers. We have a lot to learn from them, and I think they have more to learn from NPS after they graduate too.”

A lifelong learner himself, Gartner says he has been focused on exploring different perspectives on leadership through his current readings. He’s been inspired recently by learning more of Eisenhower’s leadership in World War II; the visionary abilities of tech giants like the late Steve Jobs; and those who struggled to be allowed to lead, such as the three black women mathematicians at NASA, portrayed in the movie “Hidden Figures” based on the book by Margot Lee Shetterly, who played a major role in getting America into space. All unique and different in their approach and execution of leadership, he noted, with a common theme of encouraging others to be agents of change.

For himself, Gartner prioritizes a philosophy of leadership by example and inclusion, and says he has every intent of working right alongside his peers.

“I haven’t given up being a faculty member, both in terms of my perspective and the university,” said Gartner (who is a tenured faculty member in Defense Analysis). “I’m still trying to achieve research. I have two university press books coming out this year, one on wartime decision making and the other on great power dynamics, and I’m working on articles applying AI to terrorism and looking at suicide in the military. I’d like to think of myself as an active researcher and I’m hoping once I get a year or so of provost under my belt to also be an active teacher and spend some time in the classroom.”

Gartner recognizes that he has joined the university at a time of potential instability and change, between COVID, potential flux in higher education, and budget pressure from the Pentagon. But, he says, he places a very high priority on listening to the NPS community and he welcomes any and all perspectives and feedback.

“I try to be as sensitive and empathetic to all of the issues as I can be, and it’s certainly been a hard year.” he said. “But I’m absolutely committed to our students, faculty and staff. If people have ideas about things we can do to provide more support to our community or the greater military or naval community, or our alums, I’d like to know about it, and if there’s anything I can do to be more supportive.”

Gartner received his undergraduate and master’s degrees in history and international relations, respectively, from the University of Chicago, and a master’s and doctorate in political science from the University of Michigan. He is married to Dr. Diane Felmlee, a Distinguished Professor at Penn State, and he has two daughters who live in the San Francisco Bay Area. Gartner’s hobbies include hiking, biking, music and reading.