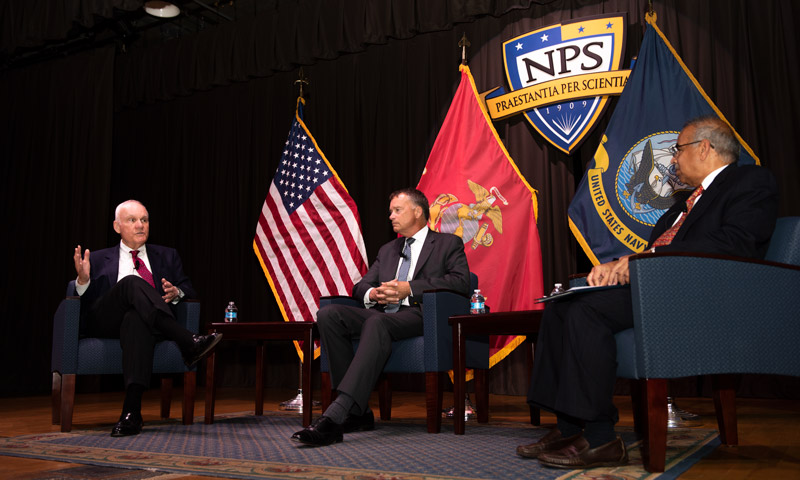 Executive Chairman of Enterprise Holdings, Inc. Andy Taylor, along with Enterprise board member retired Adm. James A. “Sandy” Winnefeld, former Vice Chairman of the Joint Chiefs of Staff, talked about how innovation, leadership and Navy values impacted the company as part of the latest Secretary of the Navy Guest Lecture (SGL) in King Auditorium, July 9.

Taylor’s father, Jack Taylor, founded Enterprise Rent-A-Car company in 1957 after serving as a Naval Aviator in World War II, and named the company after the aircraft carrier USS Enterprise (CV-6). Andy Taylor began working for Enterprise at the age of 16, slowly working his way up in the company until he became President in 1980. During that time the company’s revenue was $78 million, and since then Enterprise has expanded across the country and internationally with a revenue of $25 billion today while continuing to be a privately-owned company.

According to Taylor, the lessons his father learned in the Navy during the war helped guide the decisions he made in the creation of his company.

“When I got old enough to have a dialogue with my father about the military, he said, 'You know Andy, I was really kind of lost and the Navy transformed me,’” recalled Taylor. “‘It gave me Navy values of honor, mission, teamwork and fun.’ And he said it transformed him into to a better person, husband and a better business man.

“So, we are very much indebted to the Navy,” Taylor continued.  “My father started our company after coming out of the service with $25,000, but he felt starting a new company would be like nothing after flying off aircraft carriers.”

In a departure from the traditional single speaker format, the SGL consisted of a panel discussion with Taylor and Winnefeld as speakers moderated by NPS Distinguished Professor Uday Apte.

“I first met Andy when I was the commanding officer of the USS Enterprise (CVN 65),” said Winnefeld. “Our aircraft carriers have these beautiful legacy rooms dedicated to the ship’s namesake, and we didn't have one onboard Enterprise. Somebody said call the CEO of Enterprise Rent-A-Car, so I call and it's a wonderful organization. Literally within a minute or so I'm talking to Andy Taylor.”

Taylor, a dedicated philanthropist, not only provided some funding for the ship’s legacy room, but embarked on a long-time friendship with Winnefeld who would eventually become part of Enterprise Holdings’ independent board.

“I think military people can relate to what Andy and Enterprise has done,” said Winnefeld.  “His particular skill is spotting talent, putting it in the right place, and letting them do their job. Whether it's a truck rental or fleet management, he’s picked just the right men and women to fill those slots. He pays attention, and dips down when he has to, but it's a joy as a former military person to watch and see how this all works.”

The panel then turned to the focus of the SGL, the importance of innovation in business growth.

“The first job as a leader is to face reality,” Winnefeld said. “There was a time at Enterprise when Andy and his dad realized that things were not well from a customer service perspective, so they decided to turn that negative into a positive by innovating and inventing something called the Enterprise Service Quality Index. Now you can't get promoted in that company unless your branch is in the top 50 percent, and that really changed the behavior of the people behind the desk.”

Taylor stressed one of the biggest threats a company can have is to be satisfied with “good” when things can be “great” through innovation.

“Today we encourage innovation, for my father would say early on if you got that idea you go out and try it,” said Taylor. “It gets harder as the company gets bigger, but we encourage people to try new things, and if they fail, and they tried really hard, we still applaud them. We make sure we spend some money every year on trying new things to give opportunities for people to grow the business.”

As the conversation closed, Winnefeld offered advice to the audience that would serve them well throughout their future careers, no matter where those might take them.

“Prepare yourself, because even though you have an interest in lifelong learning, which is why you're here, try to spend at least a little bit of time reading about how business thinks and how business works,” said Winnefeld. “It's going to help you while you're in the service because you're going to be a more efficient user of taxpayer resources, and you'll carry that knowledge over after you retire.”

The longstanding SGL program provides a series of professional lectures by senior leaders throughout defense, government, industry and academia designed to help the university's students and faculty link their studies, teaching and research efforts to the defense needs of the nation. This SGL represented NPS’ new partnership with the NPS Foundation speaker’s initiative, designed to enrich the university’s SGL program through unique engagements.