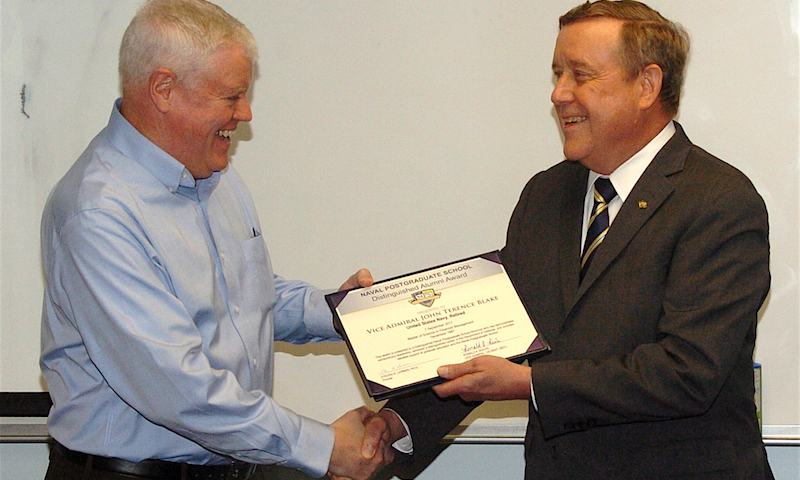 “This award is presented to a Naval Postgraduate School alumnus who has demonstrated extraordinary leadership, achieved a distinguished career in the DOD, and provides valuable support of graduates at NPS,” said Route. “I feel so strongly about the great work that Admiral Blake has done, not just over his time in the Navy, but also with our Conrad Scholar program.”

Blake served more than 37 years in the U.S. Navy before retiring in February 2013. He most recently served as the Deputy Chief of Naval Operations for Integration of Capabilities and Resources (OPNAV N8) and as the Navy’s Chief Financial Officer, where he was charged with planning, programming and executing the Navy’s budget.

Since retiring from the Navy, Blake has served as an independent consultant on a number of projects in both the defense and commercial sectors, and has served as the NPS Conrad Chair for the past two years. As Conrad Chair, Blake also teaches an NPS course for all financial management (FM) students, and mentors the students selected to be Conrad Scholars.

“My initial reaction to the award was one of surprise when Admiral Route came in the classroom and started reading the award citation. I am both honored and humbled by the award,” said Blake. “I worked with a lot of great folks over the years and they are the ones who deserve this honor. I can tell you that when I was sitting in the classrooms in Ingersoll some 30 years ago, I never expected to make such extensive use of my finance degree or to spend almost half my career in Washington in the finance world.”

Among his many assignments, Blake held eight different positions in the Pentagon all of them requiring an FM specialty. He also commanded the destroyer USS O’Brien (DD 975), guided-missile cruiser USS Normandy (CG 60), and served as Commander, Carrier Strike Group 11.