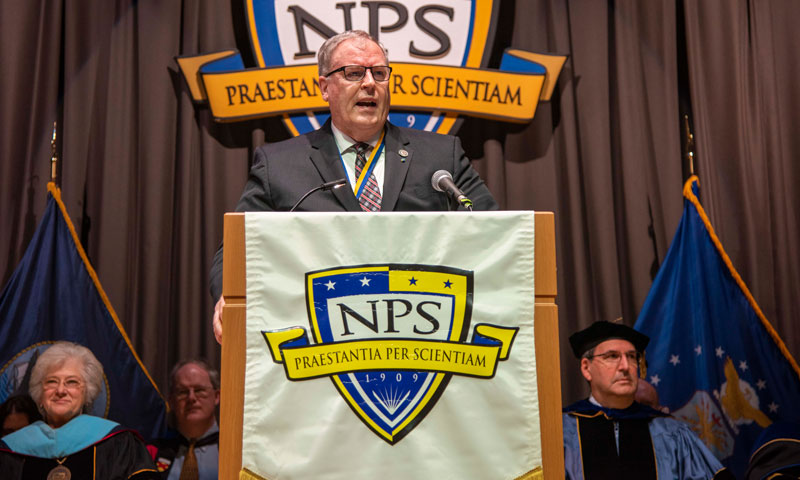 With encouragement from a former Deputy Secretary of Defense, the Naval Postgraduate School (NPS) recognized the achievements of its Summer Quarter 2022 graduating class during a ceremony at King Auditorium, Sept. 23.

The Honorable Robert O. Work, NPS alumnus and 32nd Deputy Secretary of Defense, served as the guest speaker for a commencement ceremony honoring 270 graduates, including 29 international students from eight countries.

NPS President retired Vice Adm. Ann E. Rondeau congratulated the assembled students on their efforts and achievements – while also reminding them that their journey is not over yet.

“Clearly, this is a reflection of your hard work and your collaboration with your faculty and each other, but let me tell you another thing – this gets harder on Monday,” Rondeau said. “There will be an expectation that you will bring to your next duty station what you have learned here. It will get more exciting, more challenging, and more fun. There’s no greater burden, there’s no greater privilege, and there’s no greater honor than what is in front of you right now.”

Rondeau also spoke of the increased expectations that the graduates will face to apply their knowledge and research solutions to solve key operational problems, think critically and lead successfully at their respective commands and organizations after leaving NPS.

“Our mission has been to prepare you,” Rondeau added. “It is your mission, now, to deliver. The NPS degree that you get today signals to everybody that you not only increased your knowledge, but that you have distinguished yourself and your ability to apply that knowledge to higher thought and higher results. You will be in demand.”

As an example, Rondeau pointed to the achievements of Work, who earned a Master of Science degree in Space Systems Operations from NPS in 1990.

During his tenure as Deputy Secretary of Defense from 2014 to 2017, Work led DOD efforts to focus on technological areas such as artificial intelligence (AI) and machine learning.

“Our students have a wide range of outlets to pursue education and research in AI and machine learning, and it is Mr. Work who has led that,” said Rondeau. “In the cognitive era of strategic competition, both education and technology, as well as strategic thinking, are all important to the military’s education and our decision advantage.”

In his remarks, Work acknowledged the challenges faced by the United States, including never-before-seen technological advances by strategic competitors like China.

“You are joining the force in a time of unprecedented strategic and technological flux and turbulence,” said Work. “It’s going to require all hands on deck to try to figure out how we get through this.”

But Work also expressed confidence in the ability of NPS graduates and faculty members to help address these challenges and others which lie ahead.

He cited the example of previous innovators who have walked the halls of NPS, including the legendary late Navy Capt. Wayne Hughes, an iconic strategist and tactician who, according to Work, “wrote the book” on guided munitions warfare.

“Somebody at NPS is going to write the book on algorithmic warfare,” Work said, referring to autonomous systems powered with AI, a tool he believes will provide a competitive advantage for the U.S. in the years to come. “I don’t know who it is, but if I had to make a bet, I would put my money on NPS.”

As a former Marine Corps officer who also served as Undersecretary of the Navy from 2009 to 2013, Work has firsthand experience regarding the importance of NPS and the value that it adds to not only the U.S. Navy and Marine Corps, but to DOD as a whole.

“We’ve got smart people like you and a smart place like the Naval Postgraduate School to figure this out,” he said.

For more information on the latest class, and to watch the full ceremony, check out http://www.nps.edu/graduation.