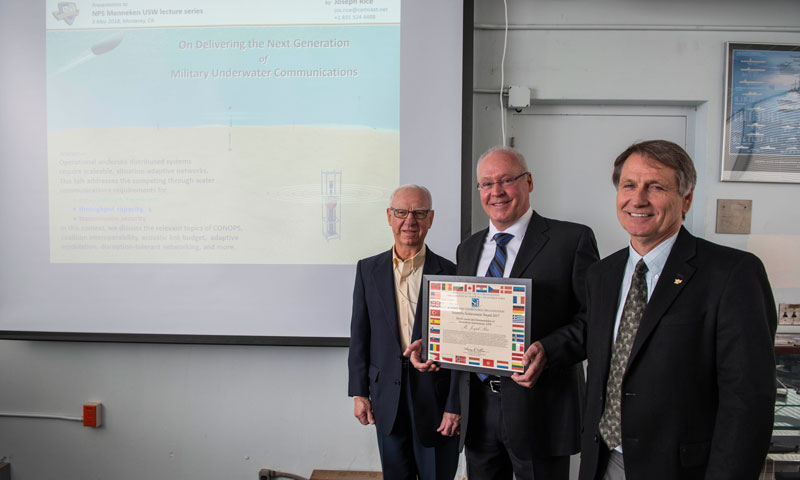 Dr. Joe Rice, a former research professor in the NPS Department of Physics, returned to campus to offer the latest Menneken Lecture, May 3. While on campus, Rice was also honored with the NATO Science and Technology Organization Science Achievement Award.

Rice’s lecture to the assembled students and faculty focused on the latest developments in research he spent many years examining here on campus, the next generation of underwater communications.

“It is very challenging to do wireless communications, especially network communications, through the water, where radio waves don’t work. Instead, we have historically had to follow the lead of marine mammals and use acoustics,” explained Rice. “It wasn’t until 1995 that it was practical to do that using a battery-powered device, which shows how far we have come in the past 20 years in making it a practical technology.”

“If you want to have undersea awareness, you have to place sensors in that environment to detect a target, so having off board sensors and the ability to communicate with them is really a force multiplier for Navy operations,” Rice said.

“This is the future, because it is becoming more and more difficult to put our Sailors and our people in these environments where they are at great risk. Having the ability to do that with machines is a better and more cost-effective approach,” he continued.

Rice began working on underwater digital communications in 1996 through a series of field experiments supported by the Office of Naval Research. Rice led the Navy’s efforts to demonstrate the practicality of an underwater, networked, distributed system involving deployable sensors, submarines, buoys and other platforms, coined SeaWeb.

While on campus offering the lecture, Rice was presented with the NATO Science and Technology Science Achievement Award, recognizing the value of his contributions to NATO in autonomous vehicle sensing, control, communications, navigation and decision, some of which was performed during his time at NPS.

“It is very gratifying, almost as gratifying as seeing some of this technology being implemented in the fleet,” Rice said. “The work we did with NATO holds a special place in my memory because of all the great partnerships and international work.”

The Menneken Lecture program provides an opportunity for undersea warfare students from varied disciplines to remain current in relevant topics offered by senior exerts across DOD, industry and academia.