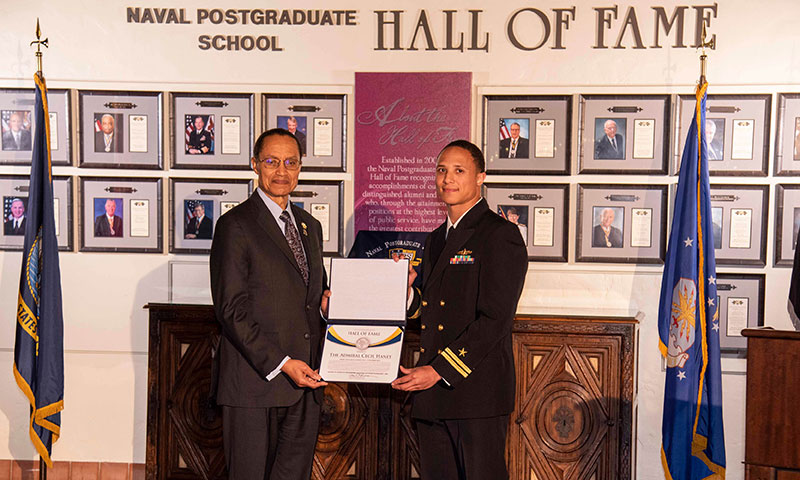 Among the guests honoring Haney’s induction were 78th Secretary of the Navy, the Honorable Carlos Del Toro, and retired Vice Adm. Edward Moore Jr., whom Haney helped induct into the NPS Hall of Fame in January 2021.

“As I reflect on these marvelous pictures and names in the NPS Hall of Fame, I think there are two things that really tie them all together,” said Del Toro. “The first is a tremendous dedication to not just our Navy, but our department of the Navy and the commitment they’ve made through their long careers, either as civilians or as military officers in service to our country. And the second thing that comes to mind is how much they all cared about people and really making a difference in people’s lives.

“Admiral Haney, I don’t think there’s anyone more representative of someone who cares about their troops, and about the people that they lead than you,” continued Del Toro. “I am deeply honored to be here.”

“[Haney] was always the kind of leader that was accessible and led from the front in a quiet way with his demeanor, his confidence, his competence and his intellect,” added retired U.S. Navy Vice Adm. Ann E. Rondeau, president of NPS. “He is an exemplar of what we value in the Navy.”

Haney, who led the Pacific Fleet from January 2012 to October 2013 and U.S. Strategic Command from November 2013 to November 2016, truly exemplified the definition of a lifelong learner.

After graduating from the U.S. Naval Academy with a Bachelor of Science degree in Ocean Engineering, Haney went on to earn two master’s degrees from NPS, in Engineering Acoustics and Systems Technology, followed by an additional master’s degree in National Security Strategy from the National Defense University.

“NPS was the foundation of my growth as a naval officer, as a person, and as a lifetime learner,” noted Haney. “I’m frankly amazed to be here today receiving this recognition. For me, just getting the rich education here at NPS is more than enough.

“I have, and I continue to talk positively about my time here,” he continued. “Not just about the quality of the graduate education here, but about the rich experience that I received then, and that continues to be just as outstanding today.”

While serving as the commander of U.S. Strategic Command and U.S. Pacific Fleet, Haney said he often turned to his alma mater for research support into some of the complex issues facing the commands.

“We could send our problems to NPS, and they would result in meaningful operations research projects, and provide us with answers to our complications,” Haney noted. “I have and continue to benefit from this tremendous university, even though I graduated from here so long ago.”

As a submariner, Haney served as a division officer aboard the ballistic missile submarine USS John C. Calhoun (SSBN 630) and the submarine tender USS Frank Cable (AS 40), where he fulfilled his surface warfare qualifications and served as a radiological controls officer. He was an engineer aboard USS Hyman G. Rickover (SSN 709) and Executive Officer aboard USS Asheville (SSN 758) before assuming duties as the assistant squadron deputy at Submarine Squadron (SUBRON) 8. Haney would go on to command the fast-attack submarine USS Honolulu (SSN 718) in 1996, SUBRON 1 from June 2002 to July 2005, and SUBRON 2 from October 2006 to March 2008.

The NPS Hall of Fame was established in 2001 to honor NPS' most distinguished alumni and friends who, through the attainment of positions at the highest levels of public service, have made the greatest contributions to society, their nations and to the instiution. Its members include Adm. Mike Mullen, former Chief of Naval Operations and Chairman of the Joint Chiefs of Staff; Adm. Wayne Meyer, the father of the AEGIS combat system; and Vice Adm. Jan Tighe, who served as Commander, U.S. 10th Fleet, making her the first woman to command a numbered fleet.

Watch the full ceremony video on the NPS YouTube channel.