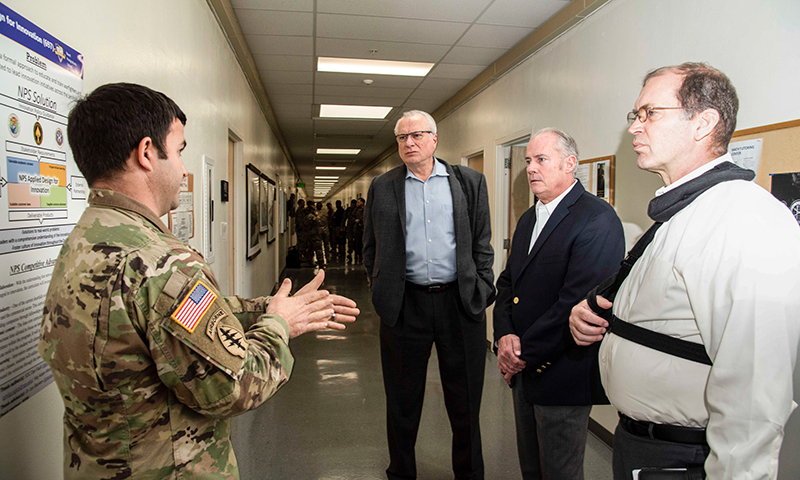 Army Maj. Philip Riglick explains his thesis to representatives from the U.S. Army Special Operations Command, who came to NPS to listen to the latest in defense analysis research and potentially select or provide research proposals as they seek solutions to specific problems from the field.

The Naval Postgraduate School Department of Defense Analysis (DA) held its biannual Research Week, Jan. 13-17, on the university campus. Home to a majority of the school’s Special Operations Forces (SOF) students, the DA department organizes the event to showcase the unique, far-reaching research efforts underway by its students. In addition, Research Week brings representatives from the broader SOF community to campus for an opportunity to leverage the brain power of the students.

Day two of event finds the DA student population filing into a lecture hall for a presentation from representatives of the U.S. Army Special Operations Command (USASOC). While the USASOC representatives provide a brief overview of their research priorities, the engagement also functions as an informal “speed dating” of sorts. USASOC’s goal, like the 12 other commands represented, is to get NPS students like U.S. Army Maj. Chad Tobin interested in dedicating their theses to research holes the organization wants filled.

Tobin is beginning his third quarter at NPS, and has much of his program’s difficult coursework behind him. He’s now preparing to dedicate time to his thesis and the proposal he must get signed off by the end of the quarter. His topic of choice – talent management.

“I see a large amount of very qualified officers departing the regiment, and I’d like to pursue what the regiment could do differently,” Tobin explains. He is specifically interested in different reward systems that could entice personnel to stay. Like many of the sponsors, USASOC has shown interest in finding ways to keep their best and brightest on active duty. Maintaining a high retention rate makes more economic and organizational sense than constantly training new SOF professionals.

Recruitment and retention are re-occurring research topics at Research Week, but are far from the only topics sponsors are interested in. Some emerging topics, according to Research Week coordinator Army Capt. Andrew Wade, highlight the DOD’s focus on great power competition (GPC) and artificial intelligence (AI) for small unit maneuvers.

While several students like Tobin are in search of a thesis topic, DA’s Research Week also provides an avenue for recent graduates, like Army Maj. James Maicke, with a chance to present their research to organizations attending. His thesis, entitled “Tailor-Made Terrorism,” conceptualizes personalized terrorism through historical examples, which he categorized into four classifications based on whether the terrorist chose the right or wrong target and conducted the right or wrong action. His conclusion offered a possible glimpse into the mind of a personalized terrorist ... how they “select the right personalized tactics to get a large emotional response either out of a population or from an individual that has influential power.”

Maicke’s research design began with a detailed explanation of what personalized terrorism is, and its potential spread as terrorist become more and more aware of the U.S.’s counterterrorism tactics.

“As time progresses, I think terrorists will certainly adapt due to effective post 9/11 counterterrorism pressure and success,” Maicke says. “My thesis also looks into new technologies and the power of mass media, and how they could provide avenues and tactics for personalized terrorism against key leaders in the future.”

Like most student theses, Maicke’s work will be published by NPS, but two of the sponsoring agency’s in attendance, the Joint Special Operations University (JSOU) and Joint Special Operations Command (JSOC) Center for Counterterrorism Studies, have asked him to consider writing a piece on his thesis for them. Maicke, however, is now primarily focused on transitioning from graduate academics back to the business of planning, managing and leading special operations. He’s moving his family to Kentucky, for his next assignment at the US Army 5th Special Forces Group.

Research sponsorships have traditionally come from within the DOD, but recently, NPS has reached out to private industry. In a first for Research Week, a machine-learning company based in San Francisco, Primer, joined this event. Primer recently established a limited-purpose Cooperative Research and Development Agreement (LP-CRADA) with NPS “to conduct research in mutual areas of interest,” according to Wade.

One of Primer’s representatives, Director of Primer’s National Security Group Brian Raymond, says the partnership gives Primer a chance to “explore some areas that don’t fit neatly on the commercial side or the government side.

“What we’re really hoping to get is an opportunity to explore with this partnership, and partnership with the students, some of the issues that are relevant to all of us,” Raymond says.

“It’s important to be connected with private industry because a lot of what we’re dealing with are emerging technologies, things that private industry is producing, so there needs to be a bridge between them and the DOD,” Wade explains. “The research is not just on what those technologies are or who’s developing them, but it’s also on how we adapt organizations and doctrine, and everything else that goes into innovating and dealing with emerging technologies.”

While Primer was the only representative of the private sector for this latest DA Research Week, the department is open to other interested, relevant companies for future events. For more information, contact Wade at amwade@nps.edu.