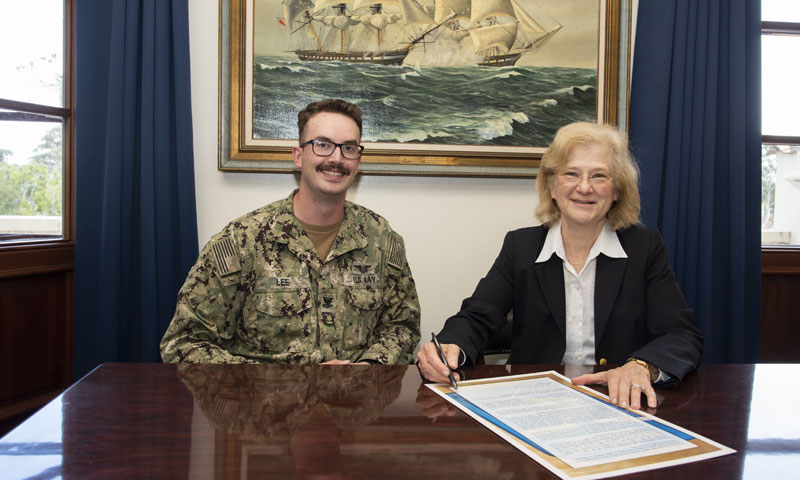 “I believe it’s important that we take time out to observe and welcome the melting pot of diversity we have in our Navy community and our nation as we recognize the contributions Hispanics have made to the country,” said Lee.

The Proclamation recognizes the diversity of the American people, where Hispanics represent a wide range of nationalities and backgrounds who have had to overcome great obstacles to persevere and flourish in every sector of society.

“With enduring values of faith and family, hard work and sacrifice, Hispanics have helped to preserve the rich heritage of generations past while contributing mightily to the promise of our nation for their children and grandchildren,” the proclamation reads.

“I think that putting our culture in the forefront this month shows how Hispanics have been proudly serving and contributing to the nation’s security for decades if not centuries,” said Hospital Corpsman 1st Class Leticia Duenas.

NPS’ own Hall of Fame includes three Hispanic members, recognized for their varied, impactful contributions to the Navy, national security and the local community.

Former Mayor of the City of Monterey, the Hon. Dan Albert, served in the city’s top leadership post for an astounding 20 years, from 1986 to 2006. He helped solidify NPS’ recognition as a cornerstone of higher education, and its position in the region’s higher education cluster.

The Hon. Everett Alvarez Jr., a member of NPS’ class of 1976, was the first pilot to be downed and detained during the Vietnam War and spent over eight years in captivity. He went on to become the deputy director of the Peace Corps.

Finally, Adm. T. Joseph Lopez is one of just two flag officers in the history of the U.S. Navy who achieved four-star rank after direct commission from the enlisted service. He also served as an NPS Board of Advisor for several years.