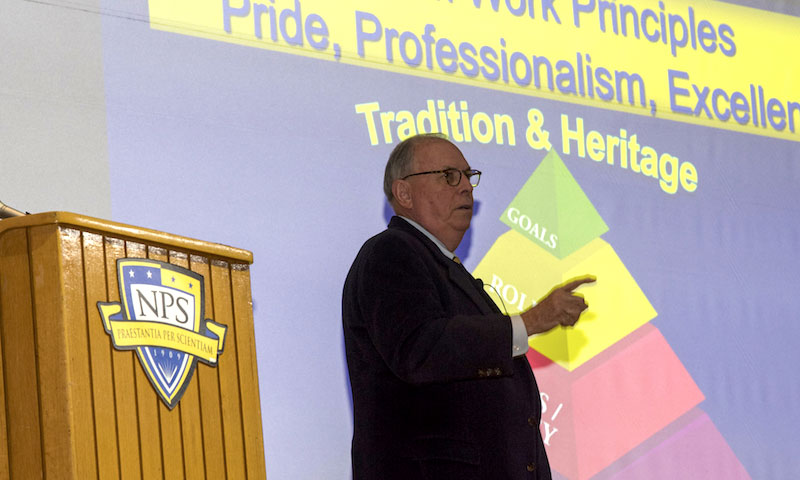 Rinn offered a powerful story of how principles of leadership, training and trust prepared a crew of 220 Sailors to save the USS Samuel B. Roberts when it was struck by a mine in 1988 in the Persian Gulf.

“Only the best, not second place, not in the running, but the best. Why is that? Because people can die, and in that there are no second place medals,” said Rinn, capturing the audiences attention from the beginning of his presentation.

“My experience that I am going to try and impart to you today is an example of what I thought was the right way to go, to be professional, to challenge people, and to demand professionalism and only the best performance,” he continued.

Rinn went on to describe his leadership goals and principles. He focused his discussion on how to encourage shipmates to build friendships and mutual respect; instil a strong chain of command; build trust and confidence up and down that chain of command; and, develop crew performance with high advancement and retention rates.

“I made sure that they understood that the most important person in their life wasn’t their wife or husband or the people we left at the pier, but the guy that sleeps next to you and fights next to you,” he continued. “He is the one who will save your life if the ship is on fire, he is the one who will pull you out of a flooded space, he is the most important person in your life, no racism, no bigotry, and today, no sexism. You must like him, you must get to know and respect him, and you must be able to fight alongside him.”

Rinn continued to describe how that trust and confidence is strengthened through, “Empowering petty officers, leading by example, professional knowledge and effort, training and demonstration of your own professionalism and capabilities,” he emphasized.

With these principles in mind, Rinn went on to describe how his crew was ready for the challenge that occurred on April 14, 1988, when the Roberts struck a mine causing catastrophic damage, massive flooding, major fires and power loss throughout the ship.

“The Samuel B. Roberts ... It was not an AEGIS cruiser or destroyer, it was a ship that was built to fight in the littoral and it was exceptionally good at that” he said. “People called it the square peg in a round hole, but actually, it was a pretty damn good ship”

After impact with the mine, Rinn described an action-packed 22 minutes that, without the aforementioned principles entrenched into the crew’s culture, they would have been dead in the water, with fire suppression systems inoperable and no power.

“Shortly after the explosion decimated the main engine room and aft auxiliary space the ship-regained power to fight and save itself rapidly because of the skill, professionalism and courage of the engineers,” explained Rinn.

“Casualty power was rigged for the aft spaces of the ship and flight deck in 22 minutes by a team [consisting] of a Boatswain's Mate, a Sonar Technician, a Ship fitter, a Culinary Specialist, and a Radioman, with an Electrician arriving at the end,” he continued. “This team succeeded in this crisis situation primarily because we had trained over and over again to prepare for such a casualty.”

For his actions during the attack, Rinn was awarded the Legion of Merit with Combat "V" and he received the U.S. Navy League Stephen Decatur Award for Operational Excellence, and the United States Congress’s National Day of Excellence Award presented by Senator John McCain.

Over the course of their Navy careers, 34 of his crewmembers made Chief Petty Officer, 20 advanced to Master Chief Petty Officer, and five of his officers went on to command and three to major command. Rinn retired from the Navy in 1997 while in the position as Special Assistant to the Chief of Naval Operations.

NPS’ SGL program provides a series of professional lectures by senior leaders throughout defense, government, industry, and academia designed to help the university’s students and faculty link their studies, teaching and research efforts to the defense needs of the nation.