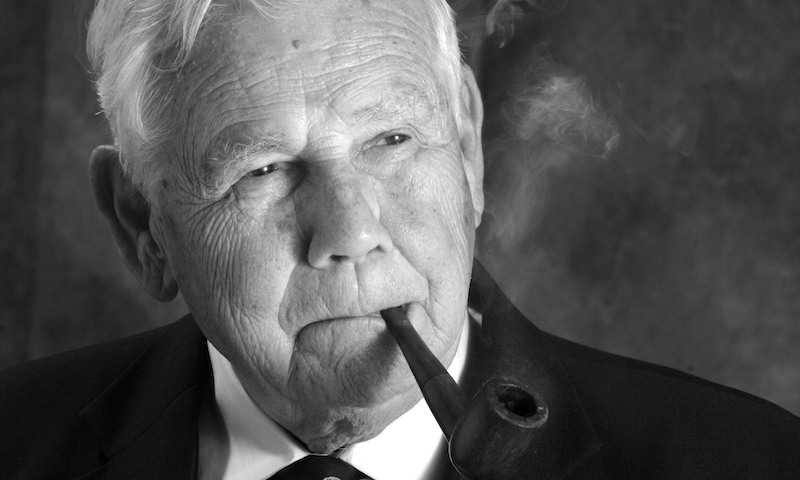 The Naval Postgraduate School mourned the loss of retired Navy Capt. Wayne P. Hughes with his passing, Dec. 3. A professor of practice in military operations research, Hughes’ reputation as a naval strategist was second to none, built through his decades of experience at sea and scholarship on campus – knowledge that he freely passed on to countless naval officers over the years.

The Naval Postgraduate School (NPS) lost one of its most treasured teachers with the passing of retired Navy Capt. Wayne P. Hughes, professor of practice in military operations research and Dean Emeritus of the Graduate School of Operational and Information Sciences ... Hughes passed away on Dec. 3 at the age of 89.

“Wayne Hughes is a national treasure, a man who was dedicated to service, to scholarship, and to educating naval officers and future leaders,” said NPS President retired Vice Adm. Ann Rondeau. “He was a giant among naval strategists, an enormously dedicated teacher and deep patriot of the first order who was both warfighter and scholar.

“He dedicated his life to educating naval officers, and our national defense is stronger because of this man,” she added.

Hughes was a fundamental figure in naval warfare, and influenced how the U.S. Navy conducts naval operations through many of his published works, most notably, “Fleet Tactics and Naval Operations.”

“The best litmus test you can do on the impact that Wayne has had is in the fact that the past seven or eight Chiefs of Naval Operations (CNO) have known him by name,” said Hughes’ longtime friend and colleague retired Navy Capt. Jeff Kline, also an NPS Professor of Practice in operations research. “His writing has inspired both tactical and operational thought throughout the fleet.”

When former CNO Adm. John Richardson asked Hughes to write a third edition of “Fleet Tactics,” Hughes gladly obliged. Richardson specifically asked him to include several chapters codifying the importance of information warfare within naval warfare at the operational level.

“When people need a reference for the next 15 to 20 years on information and cyber warfare, they’ll pull this book off of the shelf,” said Kline. “The impact he has had is immeasurable ... providing the foundational thought for many of the future discussions on how we shape and employ our forces.”

Hughes was a gifted lifelong teacher, with a rare ability to inspire learning in generations of naval officers. Hughes’ impact has not only influenced the Navy as a whole, but it has left a lasting impression on many of the students and Sailors he has taught and led, many of which are captains and admirals in the fleet today.

“His classroom experiences really had a substantial impact on how his students viewed the way that the Navy worked,” said Dr. Matt Carlyle, Chair of the NPS Department of Operational Research. “He had a deep understanding of how the Navy worked. His teaching style, advisement style, and the way he interacted with everyone he mentored gave them a deeper appreciation for all of the mechanisms of the Navy and the way it operates.”

“He was quick to welcome me to campus when I showed up here and was equally quick to include me, very generously, into his circle of fellow thinkers,” said Navy Capt. Chuck Good, NPS Surface Warfare Chair. “He was very generous with providing people who weren’t on his level with the access to what people on his level were talking about. He was just very generous in allowing those of us here on campus to share in that dialogue.”

Hughes, a 1952 graduate of the U.S. Naval Academy, commanded the minesweeper USS Hummingbird and destroyer USS Morton, and served as Chief of Naval Education and Training Support, Deputy Director of the Systems Analysis Division in the office of the CNO, and was the Executive Assistant to the Undersecretary of the Navy.

“When I first came aboard, I had no Navy background,” said Carlyle. “Captain Hughes was one of those people that every time I sat down with him, I realized I was going to get important information from him. He was a consummate professional.”

Hughes’ knowledge of naval power and tactics, seasoned by many years at sea and even more in scholarship, seemed almost infinite, Carlyle said.

“He didn’t have an opinion without having researched it deeply and understanding how it connected to reality,” he said. “Seeing that, time and time again, really showed me the importance of having that discipline in my thinking, for all of my work.”

Added Kline, one phrase out of Hughes’ work and career will always stand out, “Fire effectively first.”

“I think that single phrase is probably the most quoted part of Wayne’s work,” said Kline.  “In fact, that is the ultimate objective of Navy tactical warfare, to ‘fire effectively first.’ I think of anything else, that simple phrase and what it means will probably have the most lasting impact.”

Hughes will not only be missed as a teacher and scholar, colleagues noted. His kindness, generosity and understanding of life seem equally powerful parts of his revered character.

“As a friend, he influenced me more than anything else,” said Kline. “No other man I know personified the order of priority in one’s life to find harmony ... God, family, country and his Navy, and I think he had that in the right order.”

“Whatever we do to memorialize, we have to bear in mind not only his first-class intellect, but also his personal warmth and kindness,” added Good. “We talk a lot in today’s Navy about how we’re supposed to treat each other with respect, but he truly exemplified that. I’ve seen him talking and interacting with a variety of students, and he’s treated them all well, with kindness, dignity and respect.”

While Hughes’ intellect and legacy will continue on for generations, the university proudly featured the iconic strategist discussing the core principles of Fleet Tactics in the inaugural “Seapower Conversations” YouTube series, released last month. In what will be an ongoing effort, Seapower Conversations highlights the expertise of NPS faculty through informal dialogue on the trends, technologies and tactics that shape modern seapower.

And while that common site of Professor Hughes and his smoldering pipe reviewing papers in the Glasgow Hall courtyard may physically not be with us, Hughes legacy as a strategist, a gentleman and a patriot will live on this campus, forever.