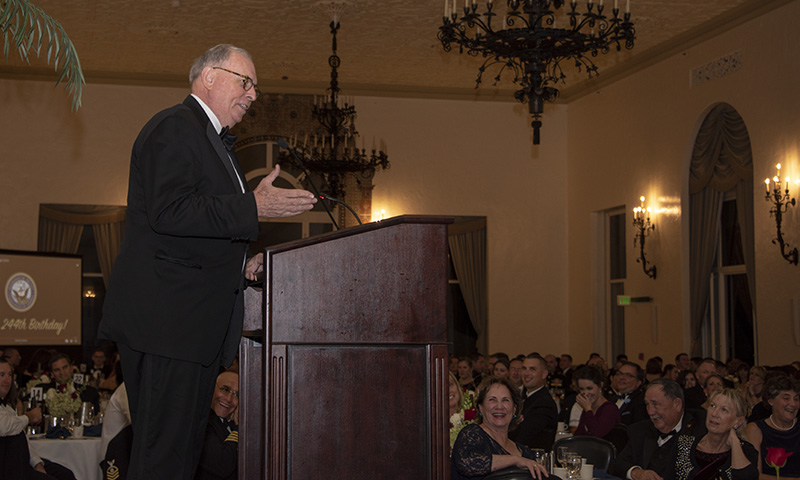 Service members and supporters from across the Peninsula gathered in the Barbara McNitt Ballroom in celebration of the Navy’s 244th birthday, Oct. 19. Keynote speaker retired Navy Capt. Paul X. Rinn talked about a lone Sailor’s heroic efforts as he paid respect to the service and the many Sailors in the room.

“I’m honored to be in the presence of all of you who serve the nation,” said Rinn. “I’m honored to be here at the Naval Postgraduate School to speak and wish you all a happy birthday to the officers, chief petty officers and Sailors who are the backbone of the Navy.”

This year’s Navy Ball theme of “No Higher Honor” served to recognize the 75th anniversary of the Battle of Leyte Gulf in 1944, the largest naval battle in modern naval history and a decisive U.S. Navy victory over the Imperial Japanese Navy. The phrase came from an after-action report from Lt. Cmdr. Robert Copeland, who commanded the destroyer escort USS Samuel B. Roberts (DE 413). Losing the ship in a sacrificial action off Samar during the battle and facing near-certain death, Copeland wrote that there was “no higher honor” than the privilege to lead such a gallant crew.

Keeping to the Navy Ball’s theme, Rinn recalled his experience as commanding officer of the guided missile frigate USS Samuel B. Roberts (FFG 58) and his encounters with Fireman Recruit Michael Tilley. Rinn described Tilley as a troubled, young Sailor whose repeated bad decisions warranted separation from the Navy, but Rinn opted to keep him aboard Roberts.

“Some people said I was soft, but it was the best decision I ever made in the Navy,” recalled Rinn. “For you see, if I decided to put Michael Tilley out of the Navy, I wouldn’t be here because I would be dead and so would 220 of my Sailors.”

In 1988, Samuel B. Roberts was maneuvering through the Persian Gulf, escorting tankers as part of Operation Earnest Will, when it encountered a minefield and a mine underneath the ship exploded. With a broken keel, fires and flooding throughout, and the possibility of sinking, Rinn said that the key to the ship’s survival rested on restoring functionality to its auxiliary machinery room (AMR) 1.

As Rinn and his crew worked to keep the ship afloat, he heard a voice say, “This is Tilley on AMR 1, what do you want me to do?”

Due to the damage, Tilley was the only Sailor who could access AMR1. Despite it being above his usual training and responsibility, Fireman Recruit Tilley managed a “suicide start” to start the ship’s diesel and channel it to its switchboard to bring propulsion power back online.

“The lights went bright and at that moment, Tilley had thrown the switch to bring power and in essence, saved Samuel B. Roberts,” stated Rinn. “Without that action, we would not have the power to fight the fires, dewater the ship, and save ourselves. We would have gone down in a minefield that was 10 miles wide and had 12 other mines in it.”

Rinn concluded his address by reminding the attendees that there really is no higher honor than a Sailor’s interminable duty regardless of pressure.

“You are in the occupation that Americans trust more than any other profession in our country,” claimed Rinn. “That is something we should all be incredibly proud of. I am proud that I have served along Sailors like you, whose rugged determination, courage, dedication to duty, professionalism and skill have always inspired me. You are the constant in our society and our great Navy, a force that is strong in talent and makes it work in the most critical moments.

“Thank you very much for your continued sacrifice, vigilance and dedication again,” he concluded.

In 1972, then Chief of Naval Operations (CNO) Adm. Elmo R. Zumwalt authorized recognition of October 13 as the Navy's birthday. Since then, each CNO has encouraged a Navy-wide celebration of the occasion to enhance a greater appreciation of our Navy heritage, and to provide a positive influence toward pride and professionalism in the naval service.