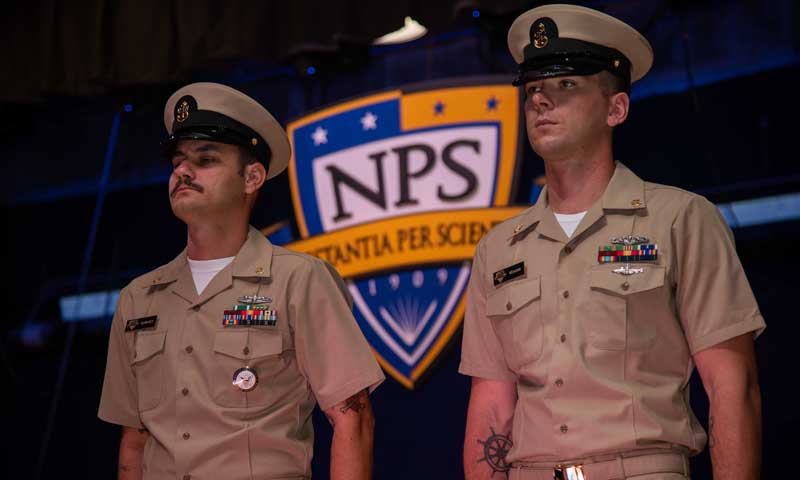 For many decades, the Chief Petty Officer has stood as a symbol for strength, discipline and knowledge amongst the Navy’s enlisted ranks. The motto “Ask the Chief” has been ingrained in the minds of junior enlisted Sailors as a reminder to look to their chief for guidance. The selection to join this fellowship holds heavy significance and is a momentous career milestone.

The Naval Postgraduate School (NPS) held a hybrid chief petty officer (CPO) pinning ceremony for its three new chiefs, and the CPO selectees from the neighboring Information Warfare Training Command (IWTC) Monterey, inside King Auditorium, Nov. 19. The event was livestreamed for all who could not attend in person.

“This milestone represents the culmination of years of hard work and sacrifice, never ending workdays, extended deployments, and long separations from loved ones,” said master of ceremonies Senior Chief Cryptologic Technician (Interpretive) Jason Noble, IWTC Operations Department Chief. “It is also a tribute to the unyielding support and understanding of spouses, friends and family. Without them, this day would not have been possible.”

At NPS, Chief Navy Counselor Joshua Garnsey, Chief Yeoman Lao Kue, and Chief Electronics Technician (Navigation) Andrew Reagan shared a variety of feelings upon hearing that they had been selected as chiefs.

“I was very surprised,” Reagan said about the moment he learned that he was selected for advancement. “I was prepared for either outcome, but did not want to get my hopes up. It took a few days to sink in, but I was very excited overall.”

“It felt surreal,” said Kue. “All my emotions that I have been holding inside for many years just fell off my shoulders. It was wonderful, especially knowing that two others of my fellow selectees made it with me.”

“What I felt most initially was disbelief,” said Garnsey. “Having been board eligible a few times, I had not expected to be called into the Chief of Staff's office and be congratulated. What I felt immediately after was excitement to call my stepmom and my dad and give them the news that they've been waiting a long time to hear. I think that was when it really hit me.”

After leading, mentoring, and watching them grow and succeed as part of the NPS enlisted staff, the enlisted leadership at NPS acknowledged and welcomed Kue, Garnsey, and Reagan as one of their own.

“As with anyone that is selected for chief, it is because the Navy saw that they were the best and fully qualified to handle the demanding job of a chief petty officer and to be the future leaders that the Navy needs,” said Chief Electrician’s Mate John Manning, NPS’ Senior Enlisted Leader (SEL).

“I was overjoyed,” remarked Chief Electrician’s Mate Brian Carpenter, a former NPS SEL. “I have watched these men grow personally and professionally these past three years and was praying that this would be the year the Navy rewards their efforts. To make all three of our eligible candidates is a blessing and each are deserving due to their endless contributions to our NPS brand and family.”

Though their Navy career paths differed, the new chiefs’ increased responsibilities at NPS paved the final steps toward attaining their chief anchors.

“NPS absolutely played a major role in preparing me to become a chief petty officer,” said Reagan. “I learned a great deal about professionalism, administration, and cultural awareness of the different specialty fields of the U.S. Navy.”

During the chief pinning ceremony, Noble described the meaning of each element of the CPO emblem — a fouled anchor and chain with the letters “U.S.N.” affixed on top — before family and mentors pinned each chief selectee. The anchor is a representation of the trials and tribulations that chiefs face daily, while the chain is a symbol of flexibility. The anchor could also be a reminder of the weight of responsibility that now falls on these new chiefs.

“Having taken over the role of leading chief petty officer for protocol and public affairs departments a little over a year ago, I felt that I got a small glimpse into the responsibility of a CPO,” said Garnsey. “The leadership at NPS saw my potential and trusted me, not only to man the gapped [Command Career Counselor] billet, but to improve processes and run the program.”

While the “U.S.N.” lettering on the CPO emblem officially stands for the United States Navy, tradition states that each letter has its own symbolism. “U” represents unity, reminding chiefs of cooperation and maintaining harmony and continuity of purpose and action. The chiefs already witnessed the command worked with them to bring out the best in each other.

“To me, [my chief selection] is a win for us and NPS,” said Kue. “I am glad to know that the Navy sees how much we put into our Sailors and command here at NPS. Every Sailor and the leadership here played a vital part in my selection. I thank each and every one of them for helping me grow personally and professionally.”

The “S” symbolizes service, which reminds chiefs of their service to the Navy and their fellow man.

“This is the product of 15½ years of hard work,” said Garnsey. “Not just my own, but the mentors and Sailors I've worked with whose lessons and guidance were given to me with no immediate benefit to themselves. I see this as my opportunity to take the cumulative knowledge and apply it to the next generation of future CPOs. I am ready for this next chapter of my career to begin. I'm excited for the challenges ahead of me, and I look forward to being a member of the elite Chief’s Mess!”

“N” stands for navigation, reminding chiefs to keep themselves on a true course so they can be in charge of their transactions with all mankind, especially their fellow chiefs. Veteran chiefs now entrust their leadership to the new chiefs, who will guide current and future shipmates through the mission while adhering to the mantra of “Navy Chief, Navy Pride.”

“I am truly blessed to have served with YNC Kue, NCC Garnsey, and ETVC Reagan and am proud to see them enter the hallowed halls of the Chief’s Mess,” said Carpenter. “As I commence my retirement, I am confident that these three chiefs will continue to make NPS great.”