Navy’s Use of Sleep-Optimized Watchbill Continues to Rise

Navy’s Use of Sleep-Optimized Watchbill Continues to Rise 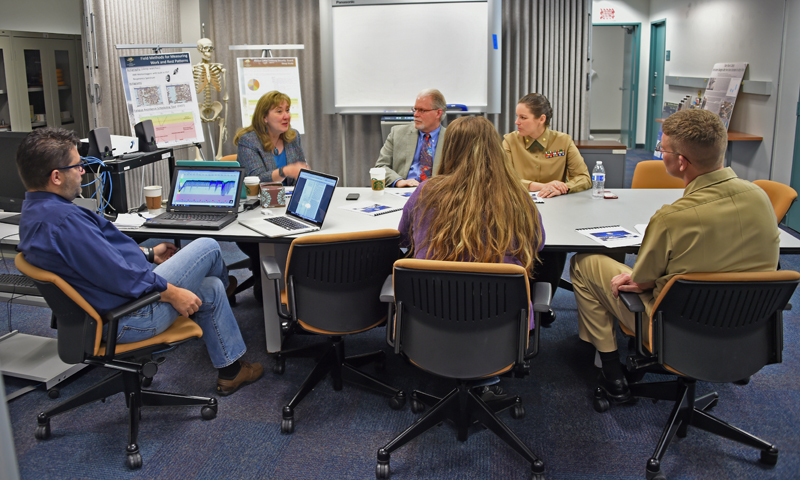 NPS Professor Nita Shattuck and her Crew Endurance team hold a meeting to discuss upcoming sleep studies supporting their circadian watchbill rotations. Over a decade of research by Shattuck, retired Navy Capt. John Cordle, and a long line of NPS master’s students, have led to broad support for the unconventional watchbill schedule throughout the surface fleet.

“The judge said, ‘If the Lieutenant j.g. had veered left instead of right he could have killed someone. In my mind he got behind the wheel equivalent of being drunk … and I blame you for this, you’re his supervisor, you’re responsible if you’re in a leadership position,’” recalled retired Capt. John Cordle. “That made it personal, he was as mad at me as he was at him.”

Cordle described this as a defining moment in his career … A car accident by one of his young Sailors, behind the wheel when he was too tired to safely operate the vehicle. He took the judge’s words to heart, and that set him on a path to study the affects of fatigue on readiness, and attempt new methods to mitigate it. On his final tour as commander of the USS San Jacinto (CG-56), Cordle implemented a sleep study with NPS Associate Professor Nita Shattuck of the Department of Operations Research, and her Crew Endurance Team.

“We set up a circadian watchbill on the San Jacinto and did a seven month deployment with it,” said Cordle. “There were, and still are, three pieces to it; first is the circadian watchbill, second is protected sleep time, third is changing daily routines.”

The most prevalent watchbill rotation that is used by the U.S. Navy is five hours on watch followed by ten hours off, known simply as five and dimes. A circadian watchbill creates rotations that add up to a 24-hour workday.

“When you look at five and dimes, it creates either a 15 or 30 hour day, neither of those will work for humans … We are unable to adapt to it,” said Shattuck. “It’s going to make us sleep at different times of the day or night for three days, with two of those days, you’re going to be up for an extended period of time.”

Protected sleep time defines time when a Sailor will sleep in relation to the time they are on watch. To accommodate this step, daily routines are adjusted as well.

“If you have watch at a certain time, you would sleep at another designated time, even if it were during the day time, which is contrary to what the surface Navy normally does,” continued Cordle. “We then did away with taps and reveille, moved the evening prayer to lunch, and we didn’t hold meetings before 0900 or after 1600. We allowed the crew to have that time unless there was a drill or an operational event.”

Since retiring from the Navy, Cordle has earned a master’s degree in engineering management, focusing on human systems. He is also now an active member of Shattuck’s Crew Endurance Team.

Shattuck’s watchbill rotation is far from new, and has garnered significant support from senior Navy leaders. Commander, Naval Surface Forces Vice Adm. Thomas Rowden encouraged the Surface Warfare community to look into the watchbill. In a message to the surface fleet, Rowden described sleep as “critical … to peak personal readiness to train and fight.”

“Fatigue has measureable negative effects on readiness, effectiveness and safety. After a day without sleep, human performance drops to dangerously ineffective levels,” continued Rowden. “Recognizing the unique rigors and irregular hours that our mission often demands, we can do more to safeguard this necessary component of individual readiness,”

Over the years, dozens of ships have contacted Shattuck and her team. One ship, the USS Stockdale (DDG-106), began implementing a 3-3-3-15 rotation. This translates to nine hours on watch, while only standing watch for six of those hours, followed by 15 hours off.

“When we have people coming to us saying, ‘I want to make my Sailors stronger, I want to improve crew endurance, I want to have them perform better,’ to me that’s success,” said Shattuck.

Another benefit to the circadian watchbill is that it is able to adjust to the current billets already in place on a ship.

NPS alumnus Dr. Panagiotis Matsangas is currently a National Research Council Postdoctoral Fellow at NPS. He served as a naval officer in the Hellenic Navy for 25 years, and currently works with the NPS Crew Endurance Team.

“The problem isn’t finding a novel way of creating a new watchstanding schedule,” said Matsangas. “The problem is changing the mentality of people and the way they think. It’s the burden of experience.”

And it’s a long-standing mentality, one of pride and bravado that has truthfully served the Navy well for many years. But, Cordle says, it’s hard to argue with the science.

“If you practice living without sleep, and you do it over and over again, you will get better at it. But science tells us, this is the exact opposite,” Cordle said.

“We use a fatigue avoidance scheduling tool, a device that we use to collect data, like an expensive fit bit,” explained Shattuck. “What we find is that a Sailor’s reaction times on five and dimes were greatly delayed. When you think about the watchstander, you want someone who can respond quickly and accurately.”