'Networks That Don't Exist' Expand the Boundaries of Battlefield Communication

'Networks That Don't Exist' Expand the Boundaries of Battlefield Communication 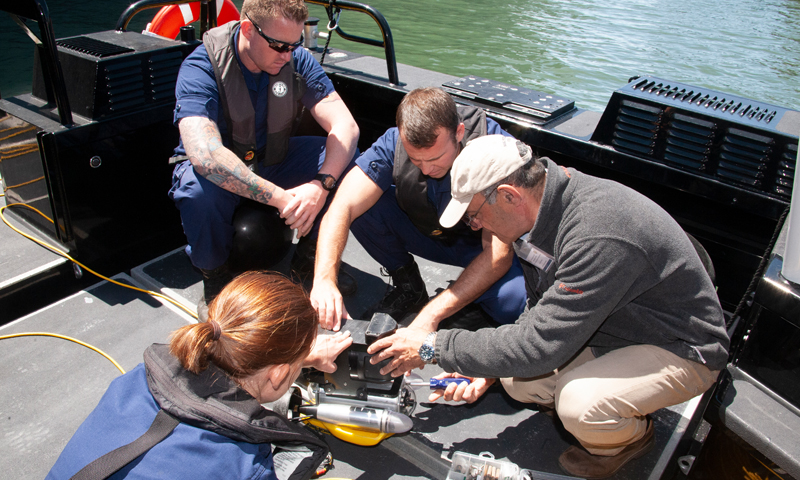 NPS Professor Alex Bordetsky of the Graduate School of Operations and Information Sciences, right, is assisted by three U.S. Coast Guardsmen in the preparation of a mesh networking node during an exercise in Oakland, Calif,. Aug. 14, 2014. The experimentation represents just one of a myriad applications of their research in ad hoc, deployable and disappearing mesh networks.

For the better part of two decades, Naval Postgraduate School (NPS) Professor of Information Sciences Alex Bordetsky and his colleague Eugene Bourakov have been working to develop and improve tactical mesh networks that serve multiple communities of interest at NPS and beyond.

This work has taken a wide range of forms throughout the years, spawning advancements in the detection of chemical, nuclear, biological and radioactive (CBRN) threats in maritime environments, exploring the use of unmanned systems in multi-domain self-forming maritime-land mesh networks, and conducting research on the use of short-living nodes in mesh networks. In the last decade, Bordetsky and Bourakov were reinforced by retired Col. Steve Mullins, now an information science Ph.D. candidate, bringing vital operational perspectives into the mesh networking experimentation endeavors.

Much of this work happens under the auspices of NPS’ Center for Network Innovation and Experimentation (CENETIX), where Bordetsky serves as Director and Principal Investigator, Bourakov as Senior Researcher and Chief Engineer, and Mullins as Chief of Operations. At CENETIX, thesis research and class project groups partner with NPS students and faculty, as well as academic and business associates to provide a research venue “for exploring the frontiers of self-organizing tactical networking and collaboration.”

Recent and unconventional developments in research focusing on expanding mesh networks by the cube satellite formation to orbit won Bordetsky the Fulbright Senior Fellowship Award in 2015. Most recently, the center’s work surrounds what he describes as “networks with short living nodes and links.” Such networks have the potential to be militarily useful, enabling short bursts of communication, then disappearing before an enemy can locate and infiltrate the network.

“I named it ‘networks that don’t exist’—meaning that they don’t exist for noticeable period(s) of time or within well-defined areas of space…so they move quickly, from one place to another, and then their setting changes,” Bordetsky explains.

Longstanding support from NPS’ Consortium for Robotics and Unmanned Systems Education and Research (CRUSER) has allowed the CENETIX team to take their research in novel directions, at times producing unconventional projects. Over the past two years, this has included the development and testing of nodes that produce short, “burst-y” communications, including the unmanned vehicles and biological nodes, in mesh networks.

The use of biological nodes (both human and animal) and unmanned vehicles (both aerial and ground) offer a variety of advantages when utilized in networks located in contested environments. Aside from being less noticeable than machine nodes, biological nodes—such as birds or dogs—would be unaffected by electronic counter-measures like GPS jamming.

Bordetsky suggests the use of such nodes are potentially valuable parts of a system that is “specifically suitable for contested environments in which cyber physical clutter is predominant,” like when both friend and foe forces are communicating via multiple avenues in a small space or when one connection is underwater.

“In modern warfare you have nothing if you do not have network,” Bourakov says. Increasing the discreteness and range of network nodes is essential for maintaining an advantage on the field. The team collected feedback from people who have been in war zones to cater their research towards crucial and realistic scenarios.

“What we’re doing is we’re taking the server – which was historically run on like a large pipe Internet from a Cloud-based server – and putting it on a standalone laptop that’s not connected to the Internet and running that server across this much lower bandwidth,” Whittaker explains.

NPS graduate Kenny Bush, a Navy Lieutenant, instantly knew the benefit of mesh networking in the telemedicine field, the focus of his thesis.

“It was like my second quarter here, and I spoke to Dr. Bordetsky and told him what I wanted to do and said it’s up to the network working,” he recalls. “He's like, ‘Yeah, we could make this work.’” Bush wants to improve telemedicine-based procedures, so experts from around the world are accessible to save lives in the field.

“This is all going to be right there and they'll be seeing that live data transfer back. That's what mesh networks can do,” Bush says.

These student-driven projects are just a few examples of how mesh networking can improve on-the-ground communication and situational awareness while maintaining stealth. More will become available as the CENETIX team expands the network’s known range. They recently conducted an international collaboration with the Polish Special Forces to test communication via mesh networks between partner nation units both on the ground and in air. It worked, increasing situational awareness between the allied forces.

“That was a unique development. No one knew exactly the challenges in sharing situational awareness in such a fragile environment,” Bordetsky says.

Now the CENETIX team is taking it a step further, testing the multi-domain mesh networking capabilities with fast moving nodes in space. In June 2020, the team – in partnership with the U.S. Marine Corps Warfighting Lab, Mechatronics Inc and AeroVironment Inc., and in collaboration with NPS Space Systems Academic Group (SSAG) – will send a CubeSat payload into low orbit via Firefly Aerospace Inc.