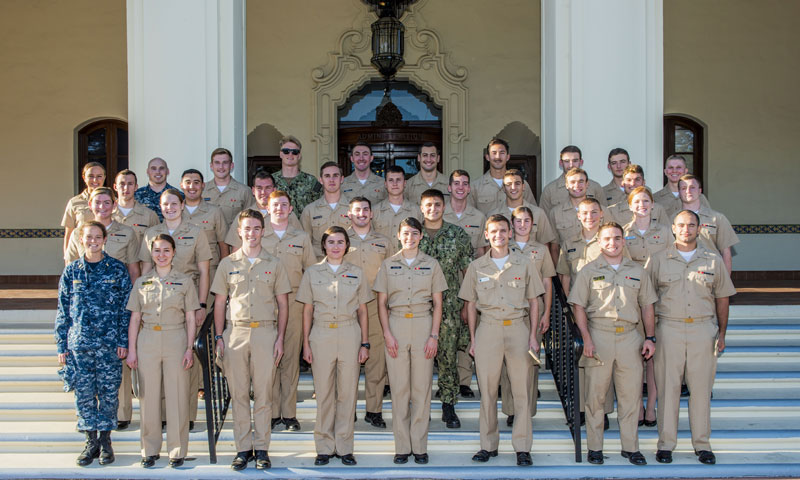 In addition to the Bowman scholarship, two new programs for newly-commissioned Navy Ensigns, the Shoemaker scholarship and a new opportunity for aviators, have made the current cohort of Ensigns on campus one of the largest ever.

The future of the Navy has arrived.

While there are typically a handful of Navy Ensigns assigned to the Naval Postgraduate School (NPS) through the Bowman Scholar program, this year their numbers are way up. In fact, a total of 40 Navy Ensigns are roaming the halls of NPS, wide-eyed and well on their way to earning graduate degrees early in their Navy careers.

Their paths to campus follow three distinct and unique opportunities, but all of the Ensigns are newly-commissioned officers attending NPS immediately after completing an undergraduate degree from either the United States Naval Academy in Annapolis, or through colleges around the country with supporting ROTC programs.

Included in the cohort, of course, are the recipients of the distinguished Bowman scholarship, which recognizes excellence in highly-competitive future Nuclear Officers from the Naval Academy. The Bowman scholarship is an ongoing program.

This year included the addition of the new Shoemaker scholarship, which seeks to replicate the success of the Bowman Scholarship in the Naval Aviation community. Additionally, several students were able to take advantage of gaps in the aviation training pipeline, and were offered a competitive opportunity to pursue graduate education while waiting to begin flight school.

“The biggest benefit to having these fresh ensigns here is that it allows them to start their career with a deeper academic background than an undergraduate,” said NPS Dean of Students U.S. Navy Capt. Markus Gudmundsson. “A graduate degree teaches you how to think critically. Whether or not the job you’re doing is a specific application of your graduate education, the ability to think, research, write and communicate is advantageous to both the junior officer and also the fleet.

“Additionally, this instills in these young junior officers the value of education while exposing them to NPS,” he continued. “The more junior officers that we have exposed to what we as a campus have to offer the more likely they will be throughout their career to recommend others to come here.”

Take Ens. Brianna Kaufman of the Mechanical Engineering and Undersea Warfare program, and Ens. Joshua Ten Eyck, from the Space Systems program, for example. The road to a graduate education at NPS began a year ago with a series of essays and research conducted in their senior year at the academy to qualify for the Bowman Scholar program. Each nominee for the program must conduct relevant, approved research that benefits the Navy reactor community.

“What made this program so appealing to me is I wanted to be a submariner but I was also really interested in pursuing my own goals in higher education,” said Kaufman. “This was the perfect match, it comes with its challenges because it is a pretty rigorous course of study but doing this before going to the Naval Nuclear Power School in Goose Creek, South Carolina, the school makes it worth it to be able to get a master’s degree early which frees up my time in the future.”

Named after the former director of the Naval Nuclear Propulsion Program, Adm. Frank L. Bowman, the scholarship offers an expedited one year graduate degree in their technical discipline.

“This stuff is all still fairly fresh in our heads,” said Ten Eyck. “Coming straight from the academy means we didn’t have to take any refresher courses and could jump right back into the fray which makes it a lot easier to accomplish so much in such little time.”

Though supporting fresh academic qualifications and insights, the new Ensigns do face the drawback of having no fleet experience. However, according to Ten Eyck, his classmates, which are mainly lieutenants and lieutenant commanders with years of fleet experience, “Have not only helped look at problems from the Navy perspective, but also been a huge help with things such as budgeting and day to day things you don’t necessarily learn in college.”

“It makes it easier to learn quicker being surrounded by so many experienced people,” Kaufman added. “If I were at power school right now it would take longer to stumble through a lot of these problems only being surrounded by Ensigns. But here, we have such a diverse range of classmates to learn from and it is all about how you utilize your resources.”

Every year up to 25 Naval Academy midshipmen can be selected for the Bowman scholarship, which also includes a tailored internship during one of the summer blocks during their time as midshipmen. Following graduation from NPS, Kaufman will report to Goose Creek to begin her training as a nuclear officer aboard a submarine. Ten Eyck will first check-in onboard the USS Carney out of Rota, Spain, where he will serve as a division officer before eventually heading towards Power School.

“At the academy, the learning was more straight out of the book but here, it forces you to think because a lot of the time it is about taking the next leap, and that different analytical way of thinking will carry over to the fleet,” said Ten Eyck. “Not only that, I am also leaving here with a whole network of people to reach out to and assist with anything I may need.”

With the intention of replicating the success of the Bowman Scholarship, former Commander, Naval Air Forces Vice Adm. Michael Shoemaker helped spearhead a similar program now dubbed the Shoemaker Scholarship. Now in its first year, five Ensign’s fresh out of Naval Academy are now full-fledge students at NPS under the Aerospace Engineering program.

“There is a renewed emphasis in the value of education and an acknowledgement that Naval Aviation was not giving education, particularly graduate level education, it’s due,” said NPS Air Warfare Chair Navy Capt. Edward McCabe. “So, we are now making an effort to try to correct that.

“These kids are highly motivated and it is refreshing for NPS,” he continued. “They are brand new to the Navy so everything for them is new and exciting and they bring that energy to the campus. They are not jaded, or bitter or tired. They are college students with open eyes an excitement for the next step forward.”

According to Gudmundsson and McCabe, most Naval Aviators do not usually have the opportunity to earn a graduate education until after the milestone lieutenant commander department head level tour. This is because of the structure of the aviation community that values tours in the cockpit early on to become a more seasoned and experienced aviator.

Among the introductory cohort of Shoemaker Scholars is Ensign Robert Thyberg, who originally did not plan to attend graduate school. But, he said he was partially inspired by the career of his older brother to make the decision when he learned of the opportunity in his senior year at the Naval Academy.

“My brother is six years older than me and he is also a Naval Aviator and, right now, is talking to his chain of command about graduate school opportunities. That helped me understand that as an aviator it is harder to squeeze in grad school after your first sea tour and still be competitive and still be flying,” said Thyberg.

“I learned about the Shoemaker Scholarship and it was an easy decision,” he added. “A lot of opportunities in the Navy and beyond value technical engineering degrees and I think getting it at the beginning will allow me to focus on aviation and have that base to work with.

“I have goals of being the best pilot I can be,” he continued, “and some day I would like to find myself working with space, I have always been fascinated by aviation so this has always been the logical next step.”

Like Kaufman and Ten Eyck, Thyberg also has found particular value in his everyday interactions with senior officers in his classes, saying that the mentorship it provides helps get a greater feel of what to expect in the future and leads to a completely unique educational experience.

“I have a lot of friends who are in flight school right now and they tell me about the separation between junior officers and the more senior officers, but here you are working on projects together, and this is a huge opportunity to pick their brain and really learn from them,” said Thyberg. “They are also helpful in pointing you in the right direction. Right now, my goal is to develop good habits, earn this master’s degree and give the Naval Academy the ability to say that this was a success.”

The third path to graduate education for the current crop of Ensigns can be placed in the, ‘making the best of it’ category. The Navy has recognized a delay in aviation training caused a backlog for newly-commissioned Aviators to go to flight school.

In an effort to use their time as effectively as possible, 15 Ensigns from ROTC programs around the country and the Naval Academy, near the top of their class, have joined their Shoemaker scholar counterparts before heading to flight school.

“This is the Aviation community’s way of taking a problem and making the most of it,” said Gudmundsson. “This way we are able to provide Ensigns with a graduate school opportunity that they would otherwise not have ... Giving them this opportunity is a benefit to them and the intent is that they return to the fleet with a competitive advantage over their peers.”

Among the aviation delayed students attending NPS is Ens. Richard Hicks, who unlike his Shoemaker and Bowman counterparts, received a commission through the ROTC program at Yale University.

“This is a completely different experience coming directly from college where the military presence was the 10 other ROTC students per class at Yale,” said Hicks. “Here I am surrounded by a super diverse range of senior military officers which is nothing like Yale where most of your classmates come from similar backgrounds.”

While attending Yale, Hicks double majored in physics and mechanical engineering. Now a student in the NPS Department of Operations Research, Hicks sees this as a great opportunity to further his education in mathematics.

“I wanted to get a master’s degree at some point and when I saw the opportunity to not only achieve that goal but also come back home to California, it was just too good of a deal to pass up,” he said. “Being a student in operations research has given me a lot of difficult tasks that I am enjoying taking head on.”

With the inclusion of the Shoemaker and aviation delayed students, NPS has now doubled the presence of aviators and perspective aviators on campus, which according to McCabe is essential to changing the community’s culture regarding education.

“These Ensigns will go on to flight school where they will talk to their shipmates about the experiences they had at NPS, what they learned, what they worked on, and ideally the relevance of what they worked on here translates to an impact on the fleet,” said McCabe. “Whether it be implementing a new capability or enhancements to aircraft operations. The relevance of that education and research to the fleet is what naval education is missing.”