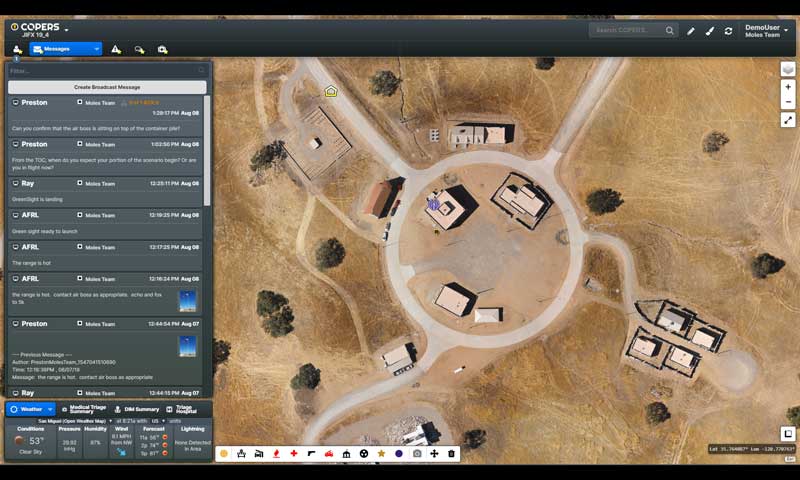 A COP is a single identical display of relevant information shared by more than one command that facilitates collaborative planning and combined execution, and assists all echelons to achieve situational awareness.

According to Dr. Ray Buettner, JIFX director and associate professor in the NPS Department of Information Sciences, there can be reluctance in having a military system accept information feeds from external or commercial systems, therefore, a military common operating picture typically only fuses military information coming off military systems.

However, according to Raymund Garcia, COPERS program manager, the COPERS system is built to easily ingest both government and commercial data in the same COP to give the warfighter the most efficient and effective operational information of the battlespace.

“The biggest differential [between COPERS and other COPS] is the capability of its interoperability,” Garcia explained. “[JIFX] is one of those few places that we can do on-the-flight integration and see the possibilities of ‘what if,’ and we find tremendous value in that.”

At JIFX, the COPERS system acted as the mortar during an integrated event connecting different experimentation groups together, allowing each unit to access and feed data into the centralized system creating situational awareness of the environment.

With the call for more integration and collaboration with industry from senior leaders like Secretary of the Navy Richard V. Spencer, having a system that can easily incorporate data from more commercialized systems can expedite service members getting pertinent information.

“We built the system to rapidly integrate, so when we come into a place like [JIFX], where there are other technologies, and they all want to be up on COPERS, it's good practice for us,” said AFRL contractor Preston Hoeve. “They want to be in the common operating picture for the command to see. It allows us to see if we’ve built a system that's flexible enough and able to rapidly expand fast enough to bring data in there.”

Allowing Garcia and Hoeve to see how COPERS performed during JIFX helped provide insight on how to further modify the system to maximize the Air Force’s investment and reach a broader customer base.

COPERS would be especially useful in humanitarian assistance and disaster relief operations, Buettner says. In these environments, where pushing information out to allies or non-governmental organizations who are providing assistance is paramount, a system like COPERS would allow for that flexibility with a reasonable commercial standard of security in place.