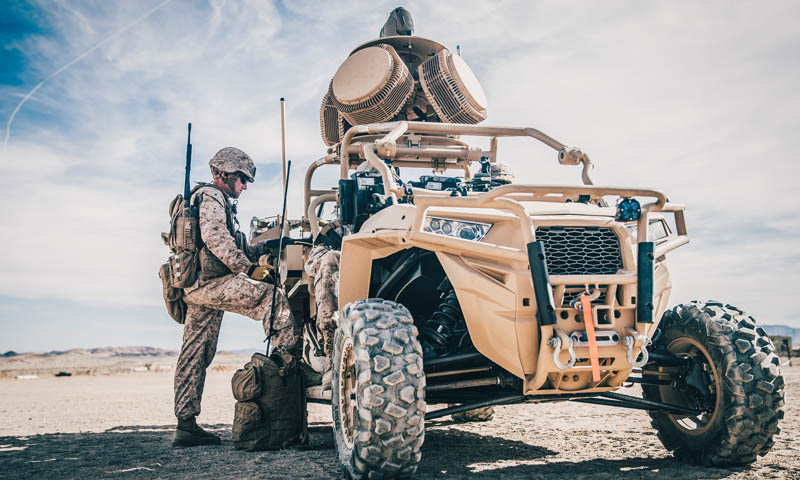 No one knows how to improve conditions on the battlefield like warfighters themselves. This unique perspective allows mid-career officers across the services to choose graduate programs that not only advance their own skills and leadership qualities, but also directly impact the warfighting domains they operate in, as well as their individual toolbelts.

Even in the university’s most technical engineering programs, detailed research has the potential to greatly advance current and future DOD systems, leading to advancements in either cost efficiencies or system efficacy.

In the case of 2015 Naval Postgraduate School (NPS) graduate Marine Corps Maj. Michael Wade, it was both.

While Wade was performing his research at NPS in the electrical engineering program, researchers were touting the virtues of a compound called gallium nitride, including retired Rear Adm. Matt Klunder, then Chief of Naval Research, who called it “one of the most important compounds you’ve probably never heard of,” in this Navy Live post. “If you have a Blu-ray disc player in your house, you already own some gallium nitride. If you have a flat-screen LED television, that also has gallium nitride. Quite simply, without this material, much of today’s high-end electronics wouldn’t exist,” the post continued.

Recognizing the potential value of GaN, Wade’s research at NPS demonstrated this transition provides a higher breakdown voltage and higher current, which allowed a decrease in the number of TRMs needed to meet the power requirement. Furthermore, GaN HEMTs have a more effective thermal displacement capability, despite being more powerful, which extend their expected operational lifetime. This not only increases the effectiveness of the system, but also has the potential to save millions of dollars over the production and sustainment lifespan of a radar system.

The Right Marine for the Job

Prior to coming to NPS and while on active duty, Wade earned his bachelor of science in engineering at Miami University via the Marine Enlisted Commissioning Education Program (MECEP). He was then picked for an Advanced Degree Program (ADP) funded by NASA to conduct research in the field of Friction Stir Welding (FSW). He simultaneously completed a master’s in mechanical engineering at the University of South Carolina. Finally, he was selected through the Commandant’s Career Level Education Board (CCLEB) to come to NPS for his master’s. Because of his previous experience, Wade knew what he wanted to study – semiconductors in radar applications.

“[NPS students] have unbelievable discipline,” Specht said. “You can just ask them to do something and they will do whatever it takes to get it done.”

She said she was especially impressed by Wade’s innate intelligence and imagination, and that he wasn’t afraid to think outside the box. Specht said she learned a lot from Wade, including a better way to put a device in a finicky preparation machine. She still uses his technique to this day.

Wade’s thesis was funded by the Defense Threat Reduction Agency (DTRA), a DOD agency that specializes in countering weapons of mass destruction (WMD). He worked with the Naval Research Laboratory (NRL) to build a better semi-conductor transistor, NRL was also very active in the GaN research realm at the time.

The pathway Wade took through DTRA to get funding is no longer offered directly to DOD schools. But Weatherford hopes more collaborations – or purposeful “cross-pollination” as he calls it – and funding opportunities like those that allowed Wade to pursue his research will become available in the near future, especially on the back of the Education for Seapower strategy released early this year.

“It’s important to have the right people in the right positions,” Weatherford says. “Some of those right people are young officers that have operational knowledge. We put a graduate degree on them and they become the glue to pull everything together. Mike is a great example.”

Weatherford couldn’t have said it better, school leaders say. Wade's thesis idea also fit all the right components of making a strong thesis ... It was a topic he was interested in; it was something a third party was interested in funding; and, there was an NPS professor with the advanced subject matter expertise work as his thesis advisor.

After graduating from NPS’ Graduate School of Engineering and Applied Sciences, the Marine Corps realized its investment in Wade with his immediate payback tour, an electrical engineer billet where he put his degree directly to use on the Ground/Air Task Oriented Radar (G/ATOR) program. The program provides the Fleet Marine Force with a modern sensor capable of both volume search and fire control missions, giving the Marine Corps expeditionary, multirole capabilities with pace setting range, detection and target classification against new and evolving threats. Here, he applied the exact same essential material he studied, using GaN in high-electron mobility transistors.

“It’s a great feeling to conduct a payback tour that’s utilizing what you had just been studying for years,” Wade says. “I mean, that’s what they built me for.”

He then moved to work on the Ground-Based Air Defense (G-BAD) program as a technical subject matter expert on radar, electronic warfare and all things science, technology, engineering and mathematics (STEM) – G-BAD is the power behind the service’s Light Marine Air Defense Integrated System (LMADIS). His work with G-BAD not only helped the Marine Corps, but helped Wade himself master skills he plans to use after he retires from the military.

Wade recently came back to NPS to find the next bright Marine who will replace him. And he was happy to see a growing pool of Marines exploring similar, highly-technical areas of study. He was equally pleased to see the recent push by the DOD to prioritize education for warfighters, quick to point out that the benefit of his technical research at NPS was realized because he was able to combine that with his experience in the battlefield.

“There are things that we think about on the battlefield that others don’t,” he explained. “When you’re here at a program office building warfighter capability, and you understand the issues and requirements of the battlefield and are building a system to meet those, [that experience] really makes for a more effective system.”