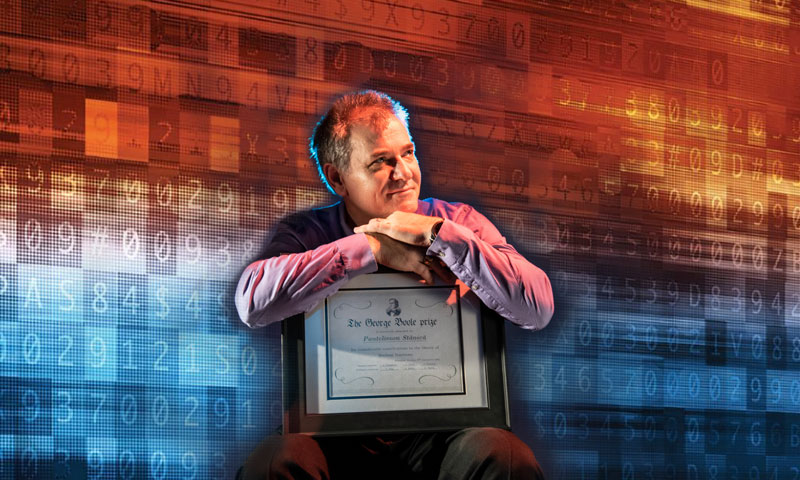 NPS tenured mathematics professor Dr. Pantelimon Stanica received this year’s George Boole International Prize, awarded every year by an international team to one or two researchers who have made a large impact in the field of Boolean functions, which are critical in cryptography and secure communications.

The basis of the digital world resides in Boolean functions, illustrated by random-seeming combinations of zeros and ones. It’s derived from pure math called Boolean logic developed in the mid-1800s by George Boole. He never would have imagined the originally theoretical principle would become so vital in mainstream society.

“Boolean functions themselves are essential for securing reliable communication,” explains Dr. Pantelimon Stanica, tenured math professor at the Naval Postgraduate School (NPS). “Every single symmetric encryption method out there has some portion – some step in the algorithm – that employs Boolean functions to be able to counter attacks that can be implemented on a system.”

“Some people claim I actually coined the term, but I probably have not,” Stanica laughs.

Cryptographic Boolean functions are essential components in secure communication algorithms. Secure communications is one of the top three areas of focus for the NPS Department of Applied Mathematics because it’s so important to the Navy, ashore and afloat.

“The Navy is more reliant than any of the other military services on secure communications because of the need for command and control and the distributed nature of the force. When we send ships forward, we have to communicate with them, and we do that via satellite comms and other means, so we rely heavily on secure and reliable communications,” explains Dr. Thor Martinsen, a permanent military professor also in the applied math department.

Martinsen says Stanica leads the secure communications research effort in the department. Stanica has dedicated his life to contemplating mathematics with a particular interest in cryptopgraphy and number theory. He’s published over 185 scientific papers with people around the world, and has taught many masters and Ph.D. students along the way. Martinsen was previously one of his doctoral students.

“Pante’s life is mathematical research. That’s what he does. That’s what he thinks about from the moment he wakes up until he goes to bed.” Martinsen says. “As a Ph.D. student, it’s good to have a role model like that … Somebody that’s prolific in publishing and thinking about mathematics.”

Stanica has worked with researchers everywhere from Germany to South Africa to Mexico. He said last time he took a trip to India, one of his most visited locations, he found a whiteboard in his hotel room and was welcomed by postdocs coming in to work with him from nine in the morning until 11 at night. But that’s how Stanica likes it. He’s always working, and he’s very glad that his wife is very supportive and encouraging of his work.

“My wife joined in at 5:00 a.m. to see the [Boole] award ceremony and my lecture after,” Stanica smiles.