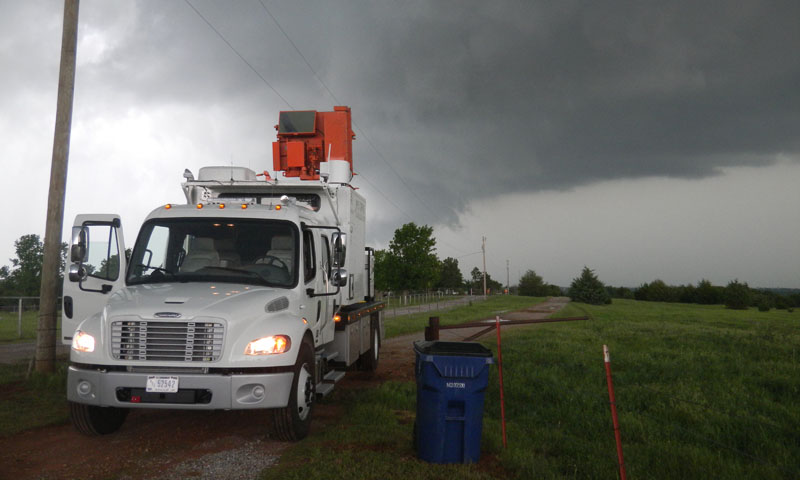 NPS’ Center for Interdisciplinary, Remotely-Piloted Aircraft Studies (CIRPAS) Mobile Weather Radar is pictured on location in Oklahoma with its MWR-05XP Mobile Weather Radar Truck chasing tornados in hopes of advancing the predictability of these dangerous storms. CIRPAS at NPS operates a wide variety of manned and unmanned research aircraft.

NPS’ Center for Interdisciplinary, Remotely-Piloted Aircraft Studies (CIRPAS) once again spent several weeks on location in Oklahoma with its MWR-05XP Mobile Weather Radar Truck chasing tornados in hopes of advancing the predictability of these dangerous storms.

CIRPAS at NPS operates a wide variety of manned and unmanned research aircraft, but its radar truck boasts some very unique capabilities. And all of CIRPAS’ assets enrich the possibilities for students in the meteorology program, and well beyond, enhancing the university’s mission of educating U.S. Navy and Marine Corps officers.

The MWR-05XP Mobile Weather Radar continues to answer questions related to weather phenomenon by pairing civilian weather processor capability to tactical military radar. NPS’ Director of Radar/EW Systems Laboratory Paul Buczynski has been working with the CIRPAS truck since its acquisition in 2005. By applying the truck’s mobile radar, researchers are able to capture complex data sets of tornados through their complete life cycle, from formation through dissipation.

“To this day, scientists know what it takes for a tornado to form, but they are not exactly sure why and when they will form,” said Buczynski, adding that advancing the predictability of these storms can make a significant difference in how far in advance warnings can be disseminated.

“Right now we want to increase the warning. If we can collect enough data to figure out what’s going on to increase that warning from a few minutes to 15 to 20 minutes, we can save lives,” he added.

Buczynski says he and his team were once again able to gather compelling data during this summer’s latest trip to ‘Tornado Alley.’

“May 6 was [probably] the biggest one, where we had several funnels created allowing for a lot of data to be collected,” said Buczynski. “Agencies like the University of Oklahoma and the National Weather Center give us the opportunity so we can use this type of technology out in the field.”

NPS Research Associate and Director of CIRPAS Bob Bluth says the technology used on the radar truck is not unlike some radar systems used in the fleet today.

“Our MWR technology is currently being used on 12 Navy ships,” said Bluth. “[The Space and Naval Warfare Systems Command] awarded a follow-on contract for SPY-1 TEP and SPS-48E/G HWDDC systems and support in March 2015 to continue adding MWR technology onto Navy ships.”

Not only does the experience of using similar technology benefit NPS students, the researchers say generating such large volumes of data has direct benefits to the meteorology community on campus as well.

“The data is available to anyone at the school through the meteorology department,” said Buczynski. “The reason why the DOD is backing this is, first of all, that there is a big weather service in the military, [but also] what we learn out in the field is brought back to the military, not just academia.”