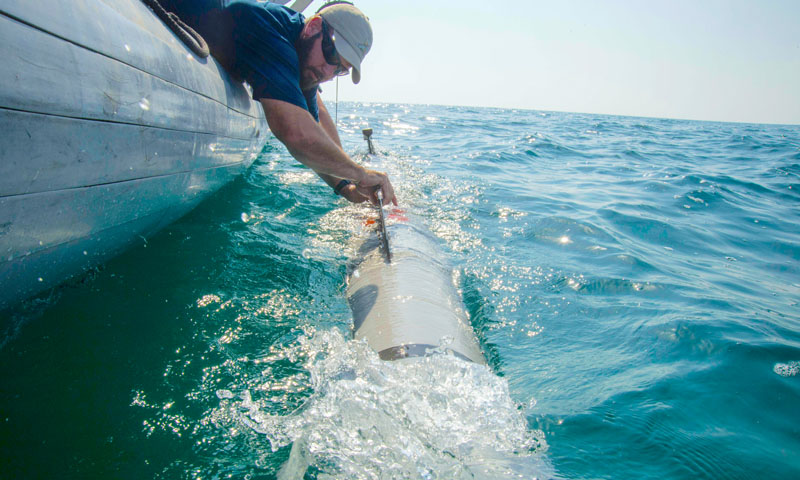 An unmanned underwater vehicle (UUV) is deployed by an operator to search for possible objects of interest using side-scan sonar. A new partnership between NPS and Woods Hole Oceanographic Institution to create a virtual undersea environment could advance future UUV development, leading to an entirely new set of critical naval missions for these emerging systems.

With undersea warfare remaining a key domain for U.S. defense strategies, the ability to map and navigate the depths of the world’s oceans becomes increasingly essential to maintaining an advantage. Responsive to the Navy’s emerging technological needs, the Naval Postgraduate School (NPS) is partnering with private academia to do exactly that – develop a virtual undersea environment to assist with the research and development of autonomous underwater vehicles (AUV) so they can conduct marine mapping of the world’s oceans.

Partnering with the Woods Hole Oceanographic Institution (WHOI) – a private, nonprofit research and higher education organization dedicated to the study of marine science and engineering – NPS is capitalizing on its interdisciplinary curricula and innovative faculty and students. Through the partnership with WHOI and its relevant expertise, NPS researchers will deliver real-world naval solutions in the form of new underwater autonomous capabilities.

“The general area of this research is to provide authentic virtual environments for developing and evaluating autonomous systems, specifically ocean robotics systems,” said Associate Professor Brian Bingham, Director of NPS’ Consortium for Robotics and Unmanned Systems Education and Research (CRUSER). “We’re trying to create these virtual environments for a variety of underwater meteorology and oceanography platforms, as well as autonomous underwater vehicles (AUVs), to test their operations and be able to develop the autonomous software before doing real-world tests.”

According to Dr. Michael McCarrin, Research Associate in the NPS Department of Computer Science, reliable mapping has only recently become widely available for land applications which has greatly modernized land-based transportation.

“Almost everything is made easier and more efficient if you have a good map,” said McCarrin. “The ocean is a challenging environment, and our reach using current technologies is relatively limited, even assuming an unlimited budget. As AUV technologies improve, the hope is that we will both extend our [mapping] capabilities while simultaneously reducing risk to human operators.”

For WHOI, partnering with NPS to create a virtual undersea environment can be used as a testbed for AUVs under development. For a virtual undersea map to be a reality, it will be autonomous systems that are exploring the ocean depths, and at lesser risk and expense than their manned counterparts.

“It’s about us recognizing opportunities to help our defense department and academic partners to create these kinds of solutions and innovations,” said Bingham. “Our stakeholders rely on us for domain expertise, and we rely on them for setting priorities … that creates a partnership.”

According to Bingham, NPS’ undersea environment will also help the university’s other partners to test their AUVs for any potential issues before taking the actual vehicle into the water.

“One thing we say a lot is, ‘If it doesn’t work in simulation, it’s not going to work in the field,’” said Bingham. “Let’s solve all the problems in simulation that we can because it’s very inexpensive, especially during COVID where we can telework to adjust the simulation. Then we can be more productive when we go into the field.”

Bingham and McCarrin credit NPS’ relationships and collaborative efforts with others in private industry and academia for the shared resources that should ultimately lead to a successful virtual undersea environment, and ultimately better autonomous systems.

“Because of our position as an academic institution and a [Department of Navy] entity, combined with our close proximity to Silicon Valley, we are in a good position to facilitate collaborative projects that bring to bear a lot of expertise,” said McCarrin. “We often have developers and leading research organizations working closely with NPS students and researchers.”

As for Bingham, he noted there are some really hard problems in the maritime domain involving autonomy and robotics, including getting people to think beyond the mainstream.

“We’re trying to create an environment that would attract our students to think about careers in these areas and realize autonomy is not just self-driving cars,” said Bingham. “For our NPS students, they’re getting to work with industry engineers to create the playing field, to come up with the physical environment simulation and infrastructure that will lead to interoperability between NPS, industry, even other Department of Defense agencies, that will live beyond them.”