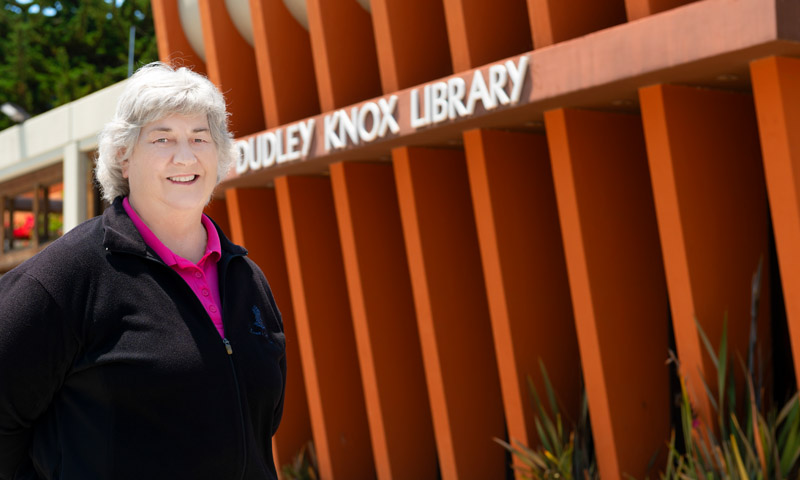 The honor is given to recognize and commend active and innovative leadership and professionalism in the promotion and development of library and information services during fiscal year 2019 by a federal librarian or information professional.

“It’s a huge honor, and a very special one in the realm of federal librarians,” said Marlatt, who has worked at DKL since 1994. “For us in the library that means providing, to the best of our ability, the right mix of resources and assistance in a timely manner. We have an excellent staff and I am proud to be a part of the Dudley Knox Library team.”

“The honor reflects highly upon herself and NPS,” added University Librarian Thomas Rosko. “It is a prestigious award and reflects the commitment to service that librarians provide to their communities. Ms. Marlatt is the epitome of what it means to serve.”

In the higher education arena, a library is more than simply a centralized place for academic and scholarly resources. Rather, it’s a powerful enabler for the university and its students and faculty, becoming an integral hub of the research, discovery and innovation that happens on the university campus.

As the lead, defense-focused science and technology graduate education institution across the Navy and DOD, NPS is the platform for advancing the warfighter through education. This makes the mission of the Dudley Knox Library that much more critical … One of the key reasons Marlatt approaches her role of supporting the NPS community’s research needs with the utmost of service.

“I believe I have a reputation for giving as much as possible and helping in any way I can,” said Marlatt. “I am one who ignores the time clock and tries to make myself available whenever or wherever needed. I will do whatever it takes to help someone or to try to fulfill the needs or the organization.”

“Being able to work at NPS and give back to our military and first responders is extremely important to me and I am very passionate about it,” she added. “They all serve on the front lines so it is important to me that those of us who are behind them give them the very best education we can.”

Marlatt’s reputation for stellar service is well-known and highly regarded throughout the university, but winning the award was a surprise. In fact, she was not even aware that her colleagues had nominated her.

“I nominate Greta Marlatt for FEDLINK Librarian of the Year because of her dedication and service to the Naval Postgraduate School (NPS) and military librarianship,” wrote Associate University Librarian Edward Corrado in his nomination. “She is a long-time librarian with many responsibilities.

“This year she led major collection-related projects necessitated by library renovations while maintaining an extremely high level of service,” he continued. “Students and faculty constantly praise her work as subject librarian for Center for Homeland Defense and Security (CHDS) because of her knowledge and dedication. She makes herself available, physically and virtually, all hours of the day to ensure users have the information they need for their dissertations and other scholarly activities.”

“Ms. Marlatt managed $2 million in acquisitions, curated over 30 LibGuides, taught 60 classes, and responded to the majority (750) of the library’s remote questions,” Rosko wrote in his nomination. “In addition, she directed a large appraisal project, as print journals, with electronic access, were weeded and the entire periodical collection and parts of the general book collection were shifted in support of a large domino plan to move collections and staff spaces to create the necessary room to house a newly-formed academic group in the building.”

Marlatt is the third NPS librarian to receive the Federal Librarian of the Year award. Previous FEDLINK Librarians of the Year include University Librarian-Emeritus Eleanor Uhlinger in 2009 and former Systems Librarian Lillian Woon-Gassie in 2003.