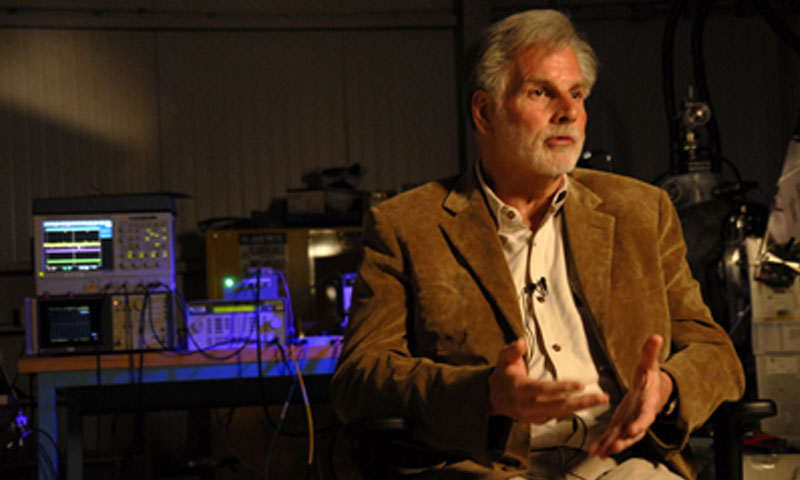 NPS Physics Professor Bill Colson sits in the free electron laser lab while explaining the unique nature of the Mark I, which is a unique piece of equipment that NPS researchers are hoping will help make shipboard laser weapon systems possible.

For the United States Navy, the Free Electron Laser (FEL) is a potential game changer – a weapon that delivers a high-intensity laser beam capable of stopping incoming missiles in seconds. Since 1989, the Naval Postgraduate School has been actively involved in developing the FEL, with the support of the Office of Naval Research (ONR), capitalizing on the expertise of NPS students and faculty through active discovery in FEL theory and simulation.

In 2007, an experimental effort was added, and now the team looks to develop new ways to optimize the capabilities of FELs for the fleet, improving the performance to more quickly and accurately counter attacks at sea.

“Right now, ships basically have to stay away from missiles and have to stay out at sea so they can’t be attacked by missiles,” explained NPS Distinguished Professor of Physics Bill Colson. “ This would give, if successful – and we think it will be successful – the ship the ability to stay near shore, stay in harms way, and basically shoot down the missiles as they approach the ship. We think we could defend a ship with high reliability.”

With a team of researchers and students, the FEL program at NPS is moving full steam ahead, and now can give students a chance to see their research through to fruition with a unique piece of equipment joining the FEL lab – an accelerator structure known as the Mark I.

“What we are doing here initially is developing a new source of electron beams – a new way of making the beams, of accelerating the beams, controlling them and focusing them,” said NPS Associate Professor of Physics, John Lewellen.

“Fundamentally, this is a very hard problem. Electrons don’t like each other very much if they are in free space – they try to get away from each other. You have to make the beam very quickly, accelerate it very quickly, and then guide and focus it properly to keep it in good shape until you can get it to the free electron laser. So what we’re studying here is how to do that.”

After receiving an electron beam accelerator from Stanford in 2008 the FEL team knew that its 200kV beam source would need an upgrade. In collaboration with Niowave Inc., the University of Wisconsin and the Massachusetts Institute of Technology, it was decided the team could make a beam source and energy booster combined into one superconducting cavity – a concept that had never before been built using the type of accelerator structure employed in the Mark I. Using the combined expertise of the collaborators, Niowave then fabricated the cryomodule. 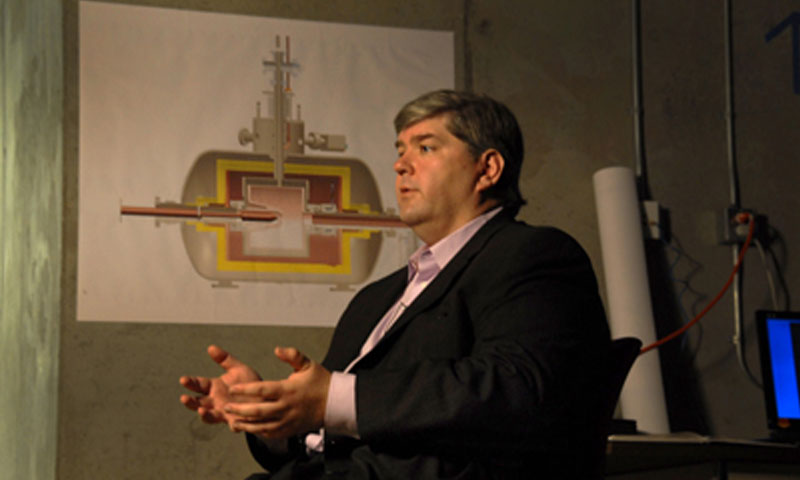 NPS Associate Professor of Physics John Lewellen sits in front of a diagram of the accelerator structure being explored in the free electron laser lab. The structure was built in collaboration with other researchers from partner universities, and Niowave, Inc., and is capable of maintaining an internal temperature of four degrees above absolute zero.

“The Mark 1 had its first operational test at Niowave’s facility about a year ago. I should mention, it’s the first of its kind in the world,” said Lewellen. “It’s the first time the Navy has fully funded a super-conducting electron beam source. And the first time that one been brought to a naval facility. So this is a very unique piece of hardware.

“In terms of acceleration, we take an electron beam off the cathode, and we accelerate it to 700,000 volts in a distance of about two or three inches – 700 kilovolts is about the transmission that some of the high-voltage power lines run on,” explained Lewellen. “The only other place in the universe you find that kind of acceleration is around black holes, in terms of gravity. So these truly are extreme machines.”

Lewellen carried out the design process for the Mark I RF (radio frequency) cavity and electron beam simulations, with the help of an NPS Ph.D. student who has since graduated. Their contributions were combined with the engineering development of Niowave to create a chamber capable of containing temperatures four degrees above absolute zero – colder than the back side of Pluto.

“The systems that we work with really truly are extreme,” explained Lewellen. “And if you think about the scale of the Mark 1, you’ve got one of the coldest places in the solar system, inches from the room outside. Within the space of one hand, if you could reach in, you’d be touching places you just cannot get to any place else.”

One of the unique benefits of having the FEL is the chance for NPS students to get a hands-on education with the laser. From hard science to problem solving, each step of their research challenges them to develop a unique, cutting-edge piece of technology.

Physics student Lt. Amanda Baxter is working on the design for a cooling system for the cathode stock of the Mark I. Within the next year, she hopes to see her design utilized in simulations, and then operationally on the Mark I and II. She noted that it is rewarding to help develop something that will ultimately protect the fleet. 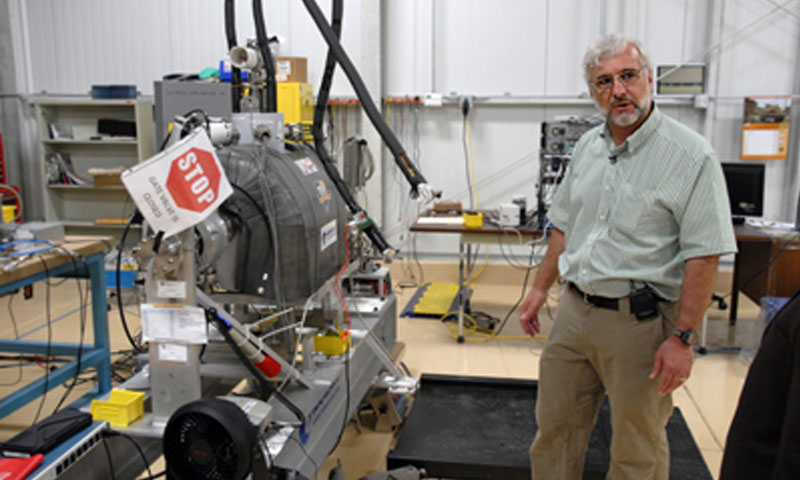 NPS Research Associate and Professor Richard Swent stands with the Mark I as the team prepares to test the structure. Mark I is part of the free electron laser laboratory’s newest additions, and one that faculty and students are hoping will help optimize the FEL’s capabilities.

“To me, the best part is just knowing that this is a system that’s going to be able to protect our ships better,” explained Baxter. “It’s pretty amazing that you have something that’s at the speed of light to protect you from missiles that are coming inbound. Because as a fire control officer, I know when we do our calculations on whether we’d be able to hit this missile if it was coming in out on a deployment, the odds were not as good as we’d like. So it’s really exciting that we would have something that would give us better protection.”

The Navy has expressed interest in getting a workable shipboard laser system to the fleet by 2015. NPS students and faculty working on the FEL project hope to enhance the laser’s operational capabilities to provide the fleet with a versatile defense system. Colson noted that some of the FEL’s uses may not even be realized until they are being utilized in the field.

“It’s a tool that the Navy has signed up for. We think it can work,” explained Colson. “It may be that it has many more uses as a weapon system, and maybe as a non-weapon system, than we’re imagining right now. As other systems get out into the fleet, they often emerge in a different way than originally intended, as the Navy learns how to use it. So we are looking forward to that in the future.”