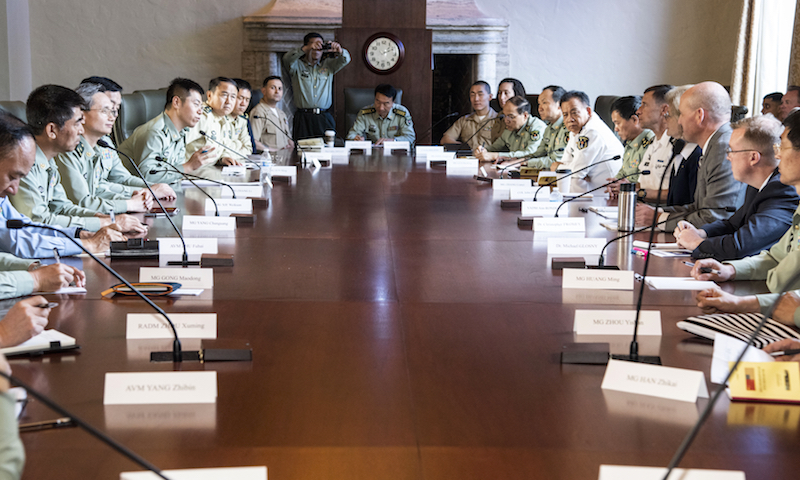 A visiting delegation of senior leaders from China’s People’s Liberation Army (PLA) are provided with an introduction to NPS during a military-to-military engagement stemming from a reciprocal agreement with the U.S.’s National Defense University (NDU) in 1996.

“This is an important time for such conversations between two great nations, and we are delighted to have you take part of this conversation,” noted NPS President retired Vice Adm. Ann Rondeau as she opened the round table.

Of the 24-member PLA delegation of flag officers were several students of the Strategy and Command Seminar at PLA’s National Defense University (PLA-NDU), the highest-level course in the PLA’s professional military education system. Headed by Maj. Gen. Xie Wiekuan, Vice President of PLA-NDU, the group - informally known as the Dragons - are conducting an annual tour of the U.S. military establishment.

The delegation first received a detailed command briefing about NPS, in fluent Chinese, by Dr. Michael Glosny, Senior Lecturer with NPS’ National Security Affairs (NSA) department, followed by an engaging conversation moderated by NSA associate professor Christopher Twomey, with the Chinese and American students alternating questions for each other.

Topics ranged from a granular conversation of Great Power Competition, freedom of navigation, national sovereignty, the critical importance of logistics, differences in military officer careers, and the role of academia in military affairs.

Twomey, who along with Glosny, serve as two of the NSA department’s resident experts on Sino-U.S. relations, summed up the goals of the visit well.

“This was an opportunity to expose PLA leaders to the value we place on developing independent critical thinking in our officers and to highlight the deep integration of the United States with its security allies and partners, both in the classroom and beyond,” Twomey said.

It served as a microcosm of the overall visit, which is foundationally based on both nations’ deep engagement with the international system, on leadership, and on the importance of civil dialogue and discourse even in the midst of some degree of competition.