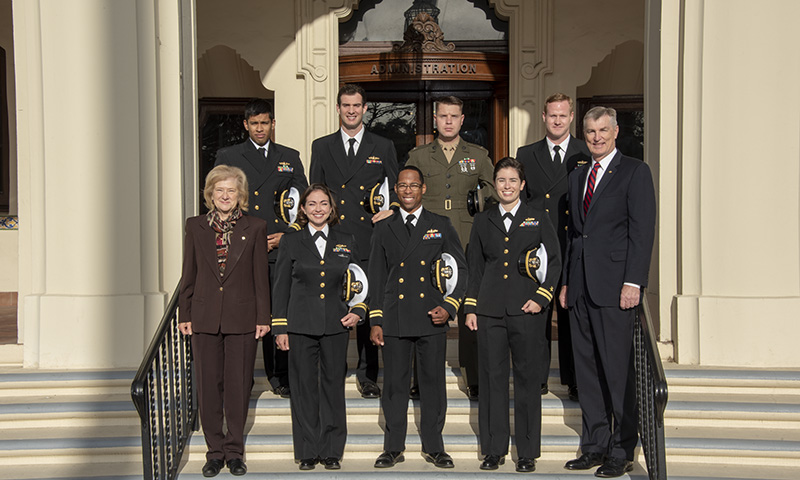 Responding to the real-world challenges of air and missile defense, the Naval Postgraduate School (NPS) has initiated the Meyer Scholar program, named for the Father of the AEGIS Combat System, retired Navy Rear Adm. Wayne E. Meyer. The objective of the Meyer Scholar program is to develop officers who are exceptionally well-educated in the science and engineering disciplines associated with Integrated Air and Missile Defense (IAMD).  The program selects current NPS students and focuses their academic courses and research projects toward the technical and operational challenges of IAMD.

“In the integrated air and missile defense mission, nations ranging from underdeveloped to great power are rapidly advancing in air and missile capabilities,” said retired Navy Capt. John Hammerer, the NPS Chair of Integrated Air and Missile Defense.  “Because this threat is developing and proliferating so rapidly, there is an urgent need for officers who are both technically competent and operationally focused to lead efforts to develop and employ IAMD capabilities to defend the United States, its deployed forces, allies, and friends from hypersonic and ballistic missile attacks of all ranges and in all phases of flight. Officers who are well-educated in the science and engineering disciplines associated with IAMD will be better able to solve complex operational and technical problems at sea and ashore.”

A selection committee comprised of Warfare Chairs and Program Officers selected six Navy officers and one Marine Corps officer to be members of the program’s inaugural class.  The committee selected the officers based on their previous operational experience, academic work, and vision of how they would focus their studies while at NPS. The students are pursuing majors which include Physics, Electronic Systems Engineering, Systems Engineering and Operations Research and will direct thesis research toward IAMD topics.

Meyer, the program’s namesake and an NPS Distinguished Graduate and Hall of Fame member, became known as the Father of AEGIS after having been the first program manager of the AEGIS Shipbuilding Project.  Meyer’s vision for performance and reliability in air and missile defense systems resulted in the design, production, test, and life cycle support of over 100 U.S. Navy and Allied AEGIS ships and ashore systems.

“We wanted to honor the contribution of Rear Adm. Meyer, and to preserve the fundamental principles he developed for combat systems engineering,” said Hammerer. “We think his vision and principles are so important that we decided to embrace them in the Meyer Scholar program.”

Meyer Scholar Lt. Justin Williamson, who has devoted his career to the maintenance and operation of the AEGIS Combat System, believes the combination of his operational experience and NPS education will lead to compelling thesis work.

“Meyer Scholar collaborations and our future thesis work are going to be exciting because of what they could lead to,” said Williamson. “I believe we all will contribute to the advancement of naval strategy, tactics and Admiral Meyer’s vision of the integrated combat system.”

According to Meyer Scholar Lt. Erick Samayoa, the program allows students the opportunity to present research to key leadership, as well as the ability to tap into NPS’ resources to significantly impact IAMD research and development.

The Meyer Scholar Program is now working on integrating the NPS educational experience with material development and operational training.  One such initiative is to develop a continuum of NPS education and Surface Warfare Tactics Instructor (WTI) training. While at NPS, Meyer Scholars will collaborate with WTIs already in the fleet to research and develop operational problems. Once graduated from NPS, officers would then attend WTI training and continue the work they started at NPS. After WTI production tours, they would head to Department Head School and then to assignments as well trained and educated Weapons and Combat Systems Officers.

Hammerer noted that at the recent U.S. Naval Institute Education for Seapower Symposium in Washington DC, one observation was that the pace of technology development and proliferation is resulting in great powers having essentially similar, if not equal, system capabilities.

“The decisive advantage at sea will likely go to the power with officers who are better educated, critical thinkers who have mastered the intricacies of their combat systems,” said Hammerer.  “The Meyer Scholar program is doing its part to produce those officers.”