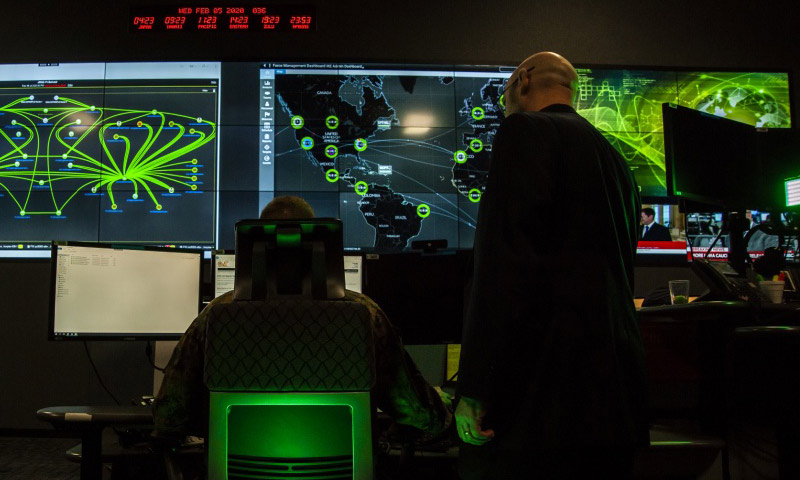 NPS’ new Center on Combating Hybrid Threats provides technical expertise, supports critical research and education programs, and fosters collaboration across and beyond campus in a comprehensive effort to support the development of the strategic, operational and technological means necessary to detect, disrupt and deter hybrid threats by both state and non-state actors.

On November 25, 2018, a Russian commercial cargo ship suddenly parked itself across the narrow Kerch Strait on the Crimea, blocking three Ukrainian Navy vessels sailing in international waters from reaching the port of Mariupol on the Sea of Azov. When they tried to turn back, the ships were rammed and fired on by Russian military forces, then boarded and seized. The event sparked international outrage at the time, but the deed was done: through obfuscation and brute force, Russia had asserted de facto dominance over the strategic passage into the Black Sea and beyond.

The incident has since been seen as a textbook example of a new generation of hybrid warfare, blurring the lines between military and unconventional conflict. Operating just below the threshold of war, state and non-state actors are increasingly employing hybrid methods to attain their objectives. Their intentional use of disinformation, prevarication, cyberattacks, economic pressure and the deployment of irregular armed groups presents a critical challenge to the world’s democracies.

It’s a challenge that the Naval Postgraduate School (NPS) is taking on directly.

The university’s new Center on Combating Hybrid Threats (CCHT), officially formed in early 2021 to meet this growing threat, is part of an international effort to detect, deny, disrupt, degrade, defeat and ultimately deter the use of hybrid threats by our adversaries. Drawing on NPS’ immense intellectual capital, the CCHT serves as a locus for interdisciplinary research, education programs and outreach for partners near and far.

“The CCHT is an opportunity for us to tackle the problem of hybrid threats from a comprehensive, ‘whole-of-discipline’ approach in order to better confront these challenges in the future,” explained Larry Walzer, CCHT’s deputy director. “We work both domestically and with allies and partner nations as a forum to exchange ideas to better confront these challenges together. Certainly, a more comprehensive approach is required if we’re going to get to a position where we can actually deter our adversaries.”

The center has already forged new partnerships to explore ways to identify and counter hybrid threats. In May, for example, the CCHT met with Argonne National Laboratory’s Hybrid Threats Division to establish future collaboration in areas of mutual interest. In addition to addressing national level interagency coordination, they looked at holding mutually beneficial training events in the future.

The CCHT has similarly partnered with the DoD Information Strategy Research Center, the Institute for Security Governance, Defense Security Cooperation Agency and the Hybrid Centre of Excellence for Countering Hybrid Threats in Helsinki, Finland.

Through NATO’s Energy Security Centre of Excellence, they’ve also supported NATO Coherent Resilience (CORE), a series of tabletop exercises dedicated to bolstering energy systems resilience in partner nations. Through CORE, the CCHT will head to Ukraine and Lithuania this September to focus building energy sector resilience to Russian hybrid threats in these regions.

NPS, under the auspices of the Energy Academic Group, has supported CORE since 2017, but collaboration with partner nations in the realm of hybrid threats actually goes back further, according to Tahmina Karimova, CCHT’s Business Development and Operations manager.

“Our international work started back in 2009 under the umbrella of the United States Partnership for Peace Training and Education Center (USPTC),” she said. “We worked across the [Combatant Commands], engaging partners on different topics, hybrid threats being one of them, but we lacked one cohesive center that would join all the faculty and students to continue the work through an interdisciplinary angle and serve as a force multiplier.

“Now we are better prepared to tackle this critical subject area through closer collaboration with expert faculty and students across several disciplines,” Karimova added.

The CCHT is currently assessing several academic venues such as new certification, joint master’s and executive education programs, and research sponsors have already proposed a number of fully-funded thesis topics, including Combating Malign Behavior at Sea, Kinetic and Non-Kinetic Hybrid Threats on Critical Infrastructure, Artificial Intelligence and Machine Learning in Manipulating Adversarial Posture in Combating Hybrid Threats, and several others.

Walzer noted, “We’re also looking to establish some events in the near term, such as virtual seminar programs, that will help our students become better aware of both the inherent challenges of hybrid threats and of the center itself in order to interact with faculty that they may not be exposed to in their individual fields. We’re certainly looking to bring our diverse disciplines and research areas together to increase the sharing of information and gain greater perspective and understanding.”

The CCHT is an interdisciplinary group consisting of 21 faculty members, representing a broad spectrum of specialties, including operations research, electrical and computer engineering, defense analysis, information sciences, systems engineering, national security affairs and computer science. Additionally, the center works with several other interdisciplinary research centers and groups at NPS, including the Energy Academic Group, the Naval Warfare Studies Institute, the Cyber Academic Group, and the Center for Infrastructure Defense, among others.

“Certainly, we’ll have an improved understanding of all the threats and potential avenues to further resilience,” Walzer said. “We’re building partnerships and the exercises enable specific improvement plans. So, through this, actual concrete changes are being made to improve effective responses, common defense, and deterrence in the future.”

Collectively, they represent a potent effort in the fight against hybrid threats. If the goal of hybrid warfare is to confuse and divide, CCHT leaders say, then the center should be considered a force for unity and common purpose.

For more information on the CCHT, visit https://nps.edu/web/ccht.