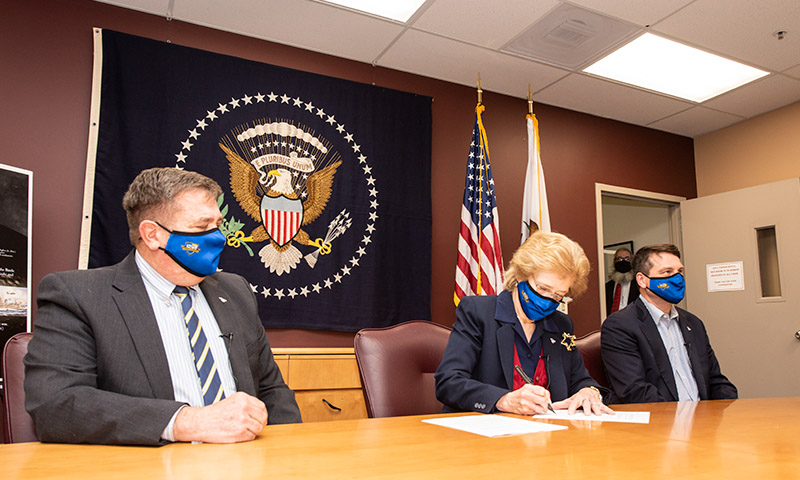 The Naval Postgraduate School (NPS) recently launched a new organization to expedite the Navy’s ability to access the university’s immense talent and resources in taking on its most complex warfighting issues.

NPS leadership officially “commissioned” the Wayne P. Hughes, Jr. Naval Warfare Studies Institute (NWSI) on Dec. 11 at a signing ceremony on the campus in honor of the late, revered Naval strategist. NWSI will serve as an essential portal connecting the Fleet with NPS research and expertise as the military services face new operational challenges.

“NWSI epitomizes what we at NPS are seeking to deliberately achieve, and that is the alignment of our work, our research, our education, our students and faculty focused on those things that are important to our warfighters,” said NPS President retired Vice Adm. Ann Rondeau. “We can have that alignment, not only in our content and studies, but also in our conversation and integration to be able to bring together the Marine Corps, the Navy and all the other services of the Joint Force so that together we can be more efficient, deliberate and effective.”

“The NWSI is how we can bring together all that we are here at NPS to Great Power Competition in this Cognitive Age,” she continued. “This is the way of the future.”

In this new era, the link NWSI provides will prove critical in retaining the technological, tactical and cognitive edge necessary to prevail in future conflicts. As our competitors increasingly challenge the U.S. Navy’s control of the seas, new concepts such as distributed maritime operations and expeditionary base operations take center stage.

NPS has the capability to thoroughly explore every aspect of these emerging naval warfighting concepts. NWSI provides a single point of entry to harness this capability by providing a hub of experts who coordinate collaboration within the NPS ecosystem in order to accelerate and enhance the development of new warfare concepts and capabilities.

“NWSI is an institution that can call on help from different people in different domains, different warfare chairs, different faculty and students to address key operational problems,” explained NWSI Director retired Navy Capt. Jeff Kline “It is a venue to leverage NPS faculty, students, education and research activities to address operational and concept development issues in an interdisciplinary manner.”

NWSI consists of NPS’ Senior Service Representatives and Warfare Chairs, as well as the Military Associate Deans of all four NPS graduate schools (international studies, operational and information sciences, engineering and applied sciences, and defense management). Between them, NWSI provides operational and functional expertise as well as access to all areas of study and research, every faculty member and the entire student body.

“NWSI’s establishment at NPS is another aspect of our focus on enhancing our Navy’s warfighting capability via education and research,” noted retired Capt. Chuck Good, NWSI Deputy Director and outgoing Surface Warfare Chair. “To our external stakeholders – our customers – NWSI will act like a concierge, a one-stop-shop to access the intellectual capital resident at NPS. Internally, NWSI will act as a synchronization engine to align interdisciplinary teaching and research along warfighting lines.”

Such unity of effort has become an imperative in the Cognitive Era, in which intelligent systems, big data, machine learning and artificial intelligence increasingly augment human activity and decision-making. As the Navy leans into Great Power Competition, advanced education, applied research and innovation will be the deciding factors in establishing the warfighting advantage of the Naval services.

NPS combines these in a way that no other organization can. As new operational challenges, capability gaps, tactical problems and technical issues unfold, NWSI will respond by breaking them down into the best education and research-related sub-topics and components.

“We will then federate them across our 400+ incredibly talented and diverse faculty and our 1,400+ operationally experienced mid-grade officers for solution development,” said Col. Randy Pugh, NWSI Deputy Director and Senior Marine Corps Representative. “NWSI will also provide our stakeholders a conduit to all of NPS’ relationships with civilian universities, commercial and industry partners, the Naval Education Enterprise, the Naval Research and Development Establishment, and the Fleet and Marine Forces.

“The bottom line is that solving tomorrow’s complex problems will require an enterprise approach and NWSI is expressly designed to help broker and then support the required cross-organizational relationships and interdisciplinary solution development,” he continued.

A key component of this, Pugh added, is ensuring the NPS community remains on the same course as the Navy and Marine Corps, both of which are rapidly evolving.

“NWSI will provide cross-campus support to our faculty and students so they know exactly where the Navy-Marine Corps team is going, that they appreciate the challenges along the way and services’ priority of effort, and that they have the tools they need to research and test potential solutions related to the creation and integration of new technologies, new warfighting tactics, new processes, or new ways of thinking,” he said.

According to Capt. Michael O'Hara, Associate Dean for Research Integration at the Naval War College (NWC), NWSI is already extending beyond the NPS campus partnering with NWC to prepare leaders to face challenges across the spectrum of conflict.

"The Naval War College and the NPS Naval Warfare Studies Institute are natural partners whose educational and research activities complement each other,” said O’Hara. “They complement each other not just in wargaming but across a spectrum of educational and research methods. Our partnership provides the best of engineering and applied sciences with strategic decision making, operational art, and ethical leadership. Second, as members of the War Gaming Pillar, NPS/NWSI and NWC are working together with other wargaming activities in the naval enterprise to support the Chief of Naval Operations' Analytic Master Plan – ensuring that all naval analytic activities benefit from the learning occurring in our wargame activities."

NWSI is aptly named after Hughes, Kline said, as the legendary author and NPS Professor of Practice devoted “his entire life thinking about naval issues; naval operations first and then about what tools can be brought to bear in order to find solutions.”

Hughes, who passed away in Dec. 2019, remains a foundational figure in naval warfare. He influenced how the U.S. Navy conducts naval operations through many of his published works, most notably his “Fleet Tactics and Naval Operations,” widely regarded as a foundational text for Navy officers on battle planning and tactical thinking since it was first published in 1986.

He was also a strong proponent of small combatants and called for smaller weapons-carrying platforms. This has become the clarion call for contemporary naval operations as the world’s navies look to relatively inexpensive platforms like drone swarms or small, swift boats to accomplish their missions.

In this regard, Dec. 11 was an auspicious date for NWSI’s inauguration. On the same day in 1942 during the Battle of Rennell Island in the Guadalcanal Campaign, five American PT boats (small, swift motor torpedo boats) engaged 11 Japanese destroyers escorting a resupply mission on the “Tokyo Express.” With the loss of one PT boat, the Americans sank one destroyer, denied the Japanese from successfully resupplying their forces on the island, and dissolved the enemy’s will to attempt further efforts, as it was the Tokyo Express’ final run.