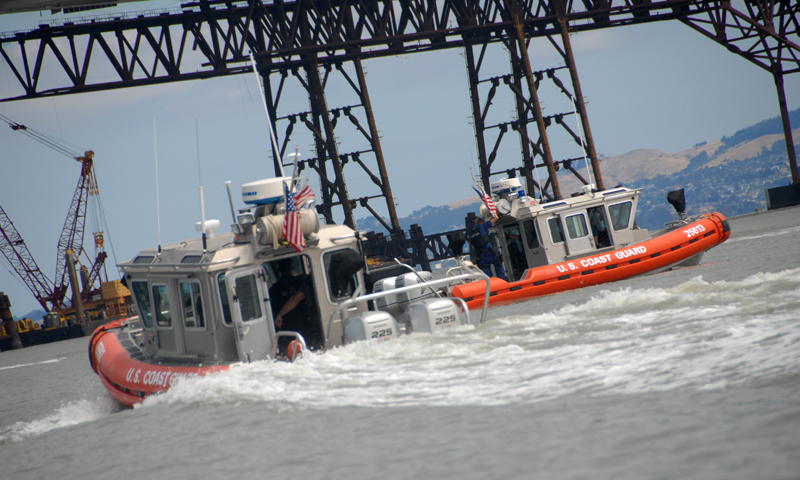 U.S. Coast Guard vessels participate in a globe-spanning experiment designed to detect and eliminate a simulated radiological device aboard a hostile vessel in the San Francisco Bay, June 11. The experiment brought together U.S. and allied nations in an ambitious effort to connect maritime law enforcement, special operations and Chemical, Biological, Radioactive and Nuclear (CBRN) experts in both the U.S. and Europe.

According to NPS Department of Operations Research Professor of Practice, and maritime security expert, retired Navy Capt. Jeff Kline, 90 percent of all goods transported to market travel by sea. That translates into thousands of cargo ships and millions of constantly moving containers. The containers and the ships that carry them are critical to global commerce, but they also pose a significant security risk.

“The volume of container traffic coming into the United States represents a potential vulnerability to our security systems,” said Kline. “The sensors and inspection techniques that our researchers are working on will enhance our ability to intercept containers with dangerous material.”

To mitigate the vulnerability posed by container traffic, Bordetsky and his associates have been quietly working to create a series of networked sensors in the U.S. and in allied countries abroad. When linked to a broader network, these sensors may offer the best hope of preventing a dirty bomb or other ship-borne nuclear device from ever reaching its intended victims.

“A central part of our TNT/MIO experiments has been the study of collaboration between boarding and detection officers and remote technical experts …. In MIO 2013, we explored the collaboration between European and U.S. experts during network-controlled check points, drive-by screenings and stand-off detection during high-speed pursuits,” said Bordetsky.

In order to make Bordetsky’s vision a reality, it was first necessary to develop a handful of new technologies and then force them to work together. And his vision paints quite a robust, secure picture.

Civilian and military Intelligence professionals collect human and signal intelligence from a variety of sensors and sources. Maritime officials, Navy and Coast Guard, from the both the U.S. and allied nations share information on suspect vessels. This information is relayed to experts wherever they are who analyze the threat and provide feedback which is shared with maritime officers who then board, identify and neutralize potential threats.

“The goal is to find the device in the fastest time possible and to establish a security perimeter,” said Bordetsky.

NPS researchers contend that the key to the successful interdiction of a nuclear threat is the sharing of information. This effort is augmented by C3PO CEBOSS, a web database and portal, which supports maritime interdiction and vessel boarding operations. The database focuses on 16 essential information characteristics.

“C3PO CEBOSS allows Maritime security operators to use data worldwide that is gathered during vessel boardings,” said DuChancell Engineering and Consulting President and CEO Fernando Cancel, III. “In the past, we weren't able to share information with our allies, we are now fixing that problem. We will upload data into a cloud-based system and make it searchable for all of our allied partners.”

“C3PO CEBOSS will be the main conduit for sending information to our CBRN [chemical, biological, radiological, nuclear experts,” added Bordetsky.

“Combatant commands identify an operational need, we work with OSD [Office of the Secretary of Defense] to find a solution … the solution we found was developed with Altascraft. They created a prototype and we have been conducting a military assessment to determine if it has military utility,” said Awad. “We hope to go live by August.”

Information gleaned from C3PO CEBOSS can be used by law-enforcement and special operations forces to identify potential threats and to weed out the myriad vessels conducting regular commerce on the open sea from potential bad actors.

“This was CENTCOM’s number one priority, “ said Cancel.

Still, it would be impossible to identify every potentially hostile vessel, and that’s where LLNL-developed sensors enter the picture. Bordetsky’s team has placed sensors in national and international ports that are designed to detect CBRN threats.

“Large area gamma detectors primarily are used for stand-off detection of vessels in the various modes of the marine primary nuclear detection function. There are also multi-function systems that can be vessel mounted or carried in a backpack,” said LLNL Health Physicist, Dave Trombino.

These sensors have been placed at strategic positions at home and abroad to identify ships harboring CBRN materials. Once identified, ships are tagged by divers or boarding teams, they can also be identified by local law enforcement by conducting a “drive-by” sweep of a suspect vehicle. Both the San Francisco and Oakland police departments have been involved in Bordetsky’s experiments and have helped to develop anti-CBRN tactics and procedures.

“We have the same boat, and the same detectors and we have helped to develop the technology … It’s one of our ongoing projects,” said Officer Dan Greely with the San Francisco Police Department.

The detection effort is even augmented by members of the California Department of Fish and Game.

“We have inspection authority that actually supersedes some local law enforcement,” said Warden Brian Patrick. “We are working with Dr. Bordetsky to have a permanent sensor mounted, it’s an ideal set-up because we are one of the only local agencies that regularly goes offshore.”

As suspect materials are detected, information is constantly uploaded via an ad hoc mobile network to CBRN experts in the U.S. and academics from universities in Europe.

Professor Alexander Loechel traveled to San Francisco from Germany’s University of Bundeswehr to take part in the experiment. He helps to coordinate between the U.S. and German sides of the experiment.

“I hope to see some reports on the interaction between the boarding crews and the European experts that can help us to determine what [CBRN material] they have,” said Loechel. “I am looking at the ability of the two groups to communicate.

”NATO CBRN Liaison, Italian Army Lt. Col. Romeo Tomasetti helps to determine whether or not a given vessel has a legitimate need to carry CBRN material.

“There is a network of experts analyzing the data in a special format, they interact with each other and analyze the data that we send to teams in the field … They also determine whether or not the source is a legitimate substance for that ship, such as a ship caring Cobalt 60 for medical purposes,” said Tomasetti.

Once a suspect vehicle has been tagged, things can get very interesting. In the latest experiment, U.S. and Norwegian Special Forces teams, working with Canadian Army CBRN specialist boarded a suspect vessel.

“We use a hand-held Identifier 2 to detect CBRN threats. We have to be able to integrate seamlessly into other special operations communities and it’s exciting to see where this is going,” said Canadian Army Master Cpl. Jason Charlebois.

And CBRN specialists like Charlebois do not travel alone. They can be accompanied by the Throwbot XT, a lightweight robot designed by Recon Robotics that can be thrown over the side of a hull and remotely controlled.

“We have some 3,000 robots being used in Afghanistan right now,” said Todd Little with Recon Robotics. “The maritime deployment of the system is a new concept. We are evaluating the system by using it in conjunction with compliant boardings.” 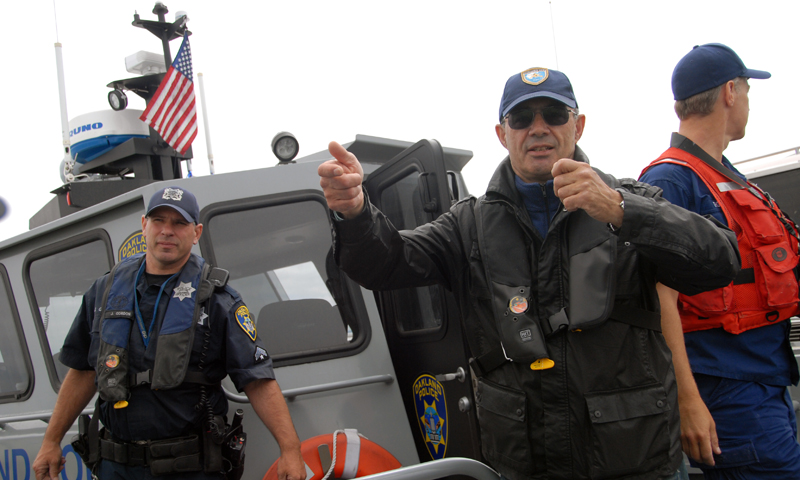 Naval Postgraduate School Associate Professor Alex Bordetsky, center, aboard an Oakland Police Department vessel in the San Francisco Bay, June 11. Bordetsky is the lead researcher in a globe-spanning experiment designed to detect and eliminate a simulated radiological device aboard a hostile vessel.

“You can be a football field away from an IED or other device and see it through the bot, it weighs only one-and-a-half pounds and can be thrown up to 120 feet, it can also survive a 20-foot drop onto concrete,” said Little.

According to its operators, the Throwbot XT is useful because it can provide live streaming video and audio as it rolls about through passageways and berthings in search of suspect materials and devices.

For larger vessels, NPS Research Associate Eugene Bourakov developed the Segway RMP-400 robot and equipped it with a nuclear detection sensor. The Segway RMP-400 can be remotely piloted throughout a suspect ship. It allows boarding crews to locate dangerous materials without exposing themselves to radioactive contamination or attack from hostile crewmembers.

Another aspect critical to Bordetsky’s most recent experiment is the incorporation of Sensitive Site Exploitation (SSE). NPS student and U.S. Army Special Forces Sgt. 1st Class Christopher Linnel has been working with the NPS Department of Defense Analysis’ Common Operational Research Environment Lab to incorporate an application known as Lighthouse SSE into the MIO 2013 experiment.

Linnel’s application attempts to simplify the SSE process by giving context to the plethora of pictures, faces and documents that are encountered during maritime boarding operations.

"This is about enabling analysts to rapidly connect the dots and better inform decision makers," said CORE Lab Co-Director Army Special Forces Col. Greg Wilson. "The ability to rapidly exploit this type of information can enable us to get inside the enemy’s decision cycle."

“I take a photo, it is geo-referenced, and metadata is stamped on it with relevant information about the search and the organization that produced the report,” added Linnel.

The application is ran on an Android OS-based mobile device and connected to a tactical network via a wave-relay radio system.

“By using the wave relay radio, you are able to update on the move and share information in real-time which is funneled through the network to CBRN experts abroad,” said Linnel.

Linnel and his team recently returned from the Baltics where they worked with a Norwegian Navy Special Forces team to test the applications networked features.

“This experiment was not only a success, but also sparked the interest of other European nations who seek to participate in next year’s experiment,” said Linnel. “The experiment next year will evolve even further with a more realistic feel to include shoot houses and military planning amongst participating units stretching across the U.S. and into the Czech Republic.”

Much of what Bordetsky’s team and his corporate and international partners are attempting is still in its experimental stages, but the experiment has already begun to produce results. The Department of Homeland Security has already purchased sensors, and local law enforcement groups are committed to future cooperation.