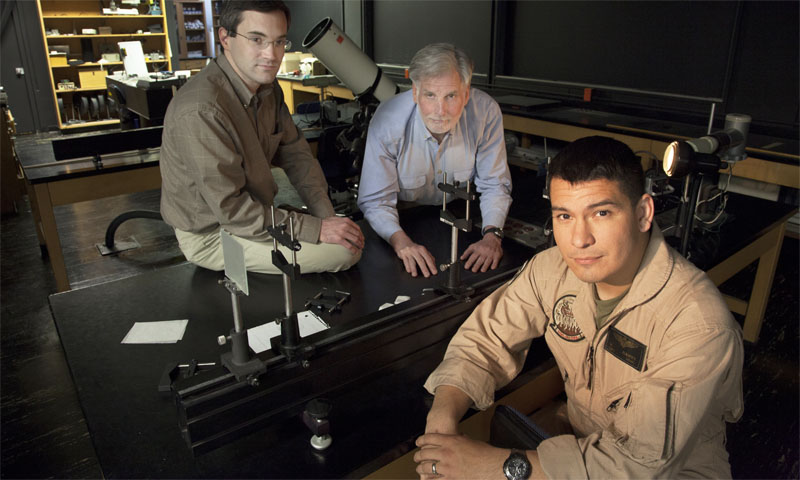 Physicists at the Naval Postgraduate School (NPS) are collaborating with researchers at the University of Texas to develop the power supply that will help make ship-born laser weapons a reality on U.S. naval vessels.

“The University of Texas is a great partner,” said NPS Distinguished Professor William B. Colson with the NPS Department of Physics. “We have worked with them on these models in the past, we are adapting the old models to the new technology.”

“The technology has reached a point that it matches the threat that we are trying to counter,” said Cohn.

According to Colson and Cohn, directed energy weapons like both solid-state and free-electron lasers are ideal missile defense weapons and are applicable to a variety of threats to contemporary naval operations.

“The problem with shooting a bullet or a missile at a target is that by the time you have fired the munitions, the target is already half-way to the ship,” said Cohn. “Lasers operate at essentially the speed of light, allowing operators to defeat threats at greater distances.”

“Radar knows exactly where the target is, but if the enemy is being evasive, your bullet goes to the wrong target. The offense always has the disadvantage, except for when you are operating at the speed of light,” added Colson.

Colson has been an integral leader in a long-established research effort in directed energy at the university, noting that lasers are a very cost-effective means of meeting mission requirements.

“Lasers are essentially electric weapons. As long as you have power to them, you have munitions – you never run out of either bullets or missiles,” said Cohn. “From a cost perspective, laser weapons are beginning to make more and more sense.”

Still, without power, the laser has little hope of defeating modern ballistic threats, and that’s where the work of Colson and his team comes in.

“The power has to come from the ship … We are exploring how to use either batteries or capacitor banks that we have modeled. The laser would draw from the stored power, so the lights stay on inside the ship when the laser is fired,” said Colson.

Colson has been conducting laser research at NPS since 1989. He began working on lasers in the ‘80s with then President Ronald Reagan’s Strategic Defense Initiative, or “star wars” program, which would have utilized a massive free-electron laser. He continues to explore free-electron laser technology, but acknowledges the value of the solid-state lasers that the Navy is currently testing.

“Instead of going with the big laser, that the Navy still wants, we are focusing on smaller lasers that are still capable,” said Colson. “Having worked on the concept of shooting things down with lasers since the ‘70s, it’s not the laser that I’ve been focusing on, but it is amazing.”

“In the movies, you hit a target and the target just disappears,” said Colson. “We are targeting a modest amount of the missile, UAV or boat … The good side is that in modern warfare we not do not necessarily want to destroy the entire target. This is a more ‘surgical’ weapon … We are exploiting vulnerabilities, like blinding a missile so that it is unable to locate where its target is.”

NPS alumnus Dave Keel, one of Colson’s former students, is currently leading an effort to place solid-state lasers on ships. His work was recently featured in the national media, where a laser successfully shot down an airborne drone during a test fire.

Keel utilizes commercial lasers using a tenth of the power gobbled up by free-electron lasers and which are already available commercially.

“Solid-state lasers have about a 20th of the power we want, but if we can get them on ships, we can put them out there and allow the Navy to train on them and work out the tactics, while we work on more complex missions,” said Colson.

NPS researchers are also working with other partners on the tactical usage of a helicopter-borne laser weapon.

U.S. Marine Corps Capt. Miguel Alvarez, a helicopter pilot and NPS student, is working on both the tactics and engineering aspects of a helicopter-borne device. He has identified several key advantages to using direct-energy weapons on helicopters.

“With a 50 caliber, we can do two or three passes and we are out of ammo, and have to return to station to rearm …  A laser weapon does not have that limitation,” said Alvarez.

"A laser is a very precise weapon. As Marines, we often need to disable vehicles, particularly at checkpoints, a laser allows us to do that with much greater accuracy,” added Alvarez.  “A laser can disable a vehicle or other target without potentially killing the occupants.”

"The Navy is making a laser system that looks at a longer range, as Marines we are operating at a much closer range. The use of a precision electric weapon with greater accuracy can help us to augment our ground forces,” said Alvarez.

"Another advantage to using a directed energy weapon on a helicopter is that it allows us to have greater range. We can engage from up to 4 km away without putting ourselves at visible risk to the adversary,” continued Alvarez.

There are also logistical advantages to using directed-energy weapons in both the Navy and Marine Corps.

"A laser weapon means greater range, because we are required to carry less weight. Energy weighs significantly less than traditional munitions, and we are able to fly further and augment forces longer,” said Alvarez.