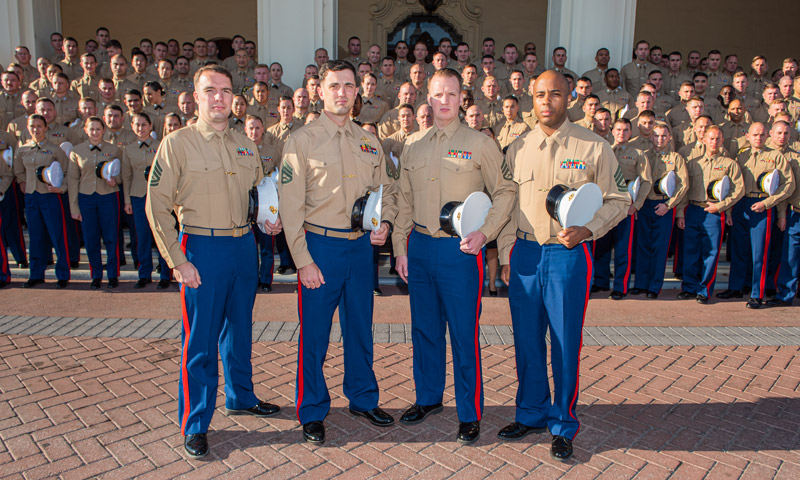 The cohort of senior enlisted Marines enrolled in Naval Postgraduate School (NPS) is growing. Driven by the Department of the Navy’s Education for Seapower study, and its recommendations to bolster education among the department’s enlisted ranks, NPS and the Marine Corps have opened up graduate education opportunities for senior enlisted non-commissioned officers (NCO).

But they’re not the only enlisted leaders getting their education on campus ... Joining them are two additional Marines attending graduate or certificate programs – one for the Foreign Area Staff NCO program, and one in the university’s defense analysis department.

The increase of senior Marine NCOs was made possible by the development and release of MARADMIN 709/18, which opens NPS programs to active duty enlisted Marines in the grades of Staff Sergeant through Master Sergeant, with at least seven years of service who have previously obtained a Bachelor’s degree.

“Historically, the Marine Corps has not had a program to select NCOs for graduate education in the same way we have had for officers,” said NPS Senior Marine Corps Representative Col. Randy Pugh. “Now the Marine Corps is getting more serious about providing advanced education opportunities to enlisted Marines, because 21st century warfare is becoming more technically complex. Our service needs to be prepared, and accurately reflect the environment that we are going to fight in.

“Educating our force is about capability rather than rank,” Pugh continued. “By getting an education, our Marines can then contextualize it for what they’re expected to do, and although the role of an officer and NCO may be different, they both require the foundational understanding that education provides.”

According to Pugh, the increase in enlisted Marines is a direct result of the Education for Seapower study, which aims to tackle the challenges of a changing technological world through an educated naval force.

“Knowledge is the new currency, and this means we need to educate our force from the most junior person all the way up,” Pugh stressed.

“Another thing that's happening is we're blending together commercial and civilian technologies with military technologies,” he continued. “Big data, artificial intelligence and communications technologies that are being created outside the military are being integrated into the military, and having enlisted Marines that receive the same education and credentials as their counterparts on the other side of the fence in the civilian sector gives you a level of legitimacy when you go and interact with the commercial sector.”

Gunnery Sgt. John Lytle, a 14-year veteran who thought his career had stagnated, considered leaving the Marine Corps. Then he came across the MACO program as a “once in a lifetime” opportunity of furthering his education and career.

“I was six years left until retirement looking for the best way to advance myself,” said Lytle. “I viewed [the MACO program] as a way to develop further both intellectually and technically, and so I decided to continue to serve.”

Lytle noted that while general military training provides individuals with the operational capability to do a specific job, graduate programs like MACO benefits the Marine Corps directly because it looks at issues on a broader scale.

“The education goes beyond the technical, and provides opportunities to be exposed to future technologies that you wouldn’t even been aware of otherwise,” said Lytle. “My hope is to take what I learn here and take it back to the fleet and help implement it to help guide us in the right direction on the future of cyber.”

Aside from the MACO program, there are also certificate programs available for enlisted Marines. Take, for example, Master Sgt. Konrad Kleczek, who is attending NPS’ Foreign-Area Staff Non-Commissioned Officer (FASNCO) program in a two-quarter course focusing on security cooperation. FASNCOs are designed to supplement their Foreign Area Officer counterparts ... The program provides language, regional expertise, and cultural capabilities at the tactical level to improve irregular warfighting and interagency integration.

“When I joined the Marines 20 years ago, a corporal was a corporal, a gunnery sgt. was a gunnery sgt., and a major was a major,” said Kleczek. “But today, with the information and technology available those lines are not as neatly drawn, and any type of educational opportunity for our enlisted services makes us not only more lethal, but also better leaders.”

Staff Sgt. Derek Sharp is in the special operations and Irregular Warfare curriculum, which is part of the Cognitive Raider pathway of MARSOF’s 2030 planning document. Coming from Marine Special Operations Command Force (MARSOC), Sharp just finished his first quarter on the NPS campus.

“Being one of the only enlisted guys here it has been a fantastic opportunity to learn from a great combination of faculty and fellow students,” said Sharp. “I am still in contact with the MARSOF strategy and plans division, who is sponsoring my time here. Through them, I have been looking at thesis topics that would best benefit both myself and MARSOF, as well as be in alignment with the 2030 planning document.”

According to Sharp, the program seeks to identify senior Marine MARSOF personnel still young enough in their career to be able to utilize unique graduate education in the strategy sphere. Following his time at NPS, Sharp will serve a two-year pay back tour with MARSOF’s strategy and plans division.

“We need smarter, more connected, better informed leaders, and senior enlisted leaders who are a part of that,” said Sharp. “Giving those leaders the same graduate level education helps make them better advisors and decision makers at the command level, and coming here exposes them to that type of thinking.”

Pugh stated this is only the beginning as the Navy and Marine Corps team continues to raise the importance of education across all ranks.

“I would like to see the undergraduate side of the Marine Corps go towards a similar model so that instead of getting training, you're getting an education and earning credits,” said Pugh. “Then by the time you reach the rank of Staff Sergeant or Gunnery Sergeant you already have your bachelor’s degree. This drastically expands the pool of talent to choose from when bringing in senior enlisted to NPS.

“While cyber is an obvious one, I would like to see enlisted Marines attending electrical engineering, space systems and even the business school as well,” he continued. “Enlisted Marines in those fields need that level of expertise as well.”