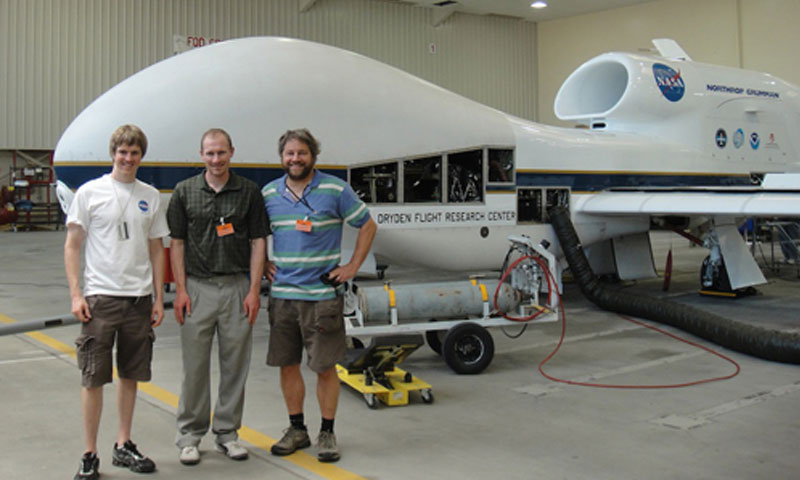 Members of the Hurricane Severe Storm Sentinel (HS3) project, including NPS meteorology professor Michael Montgomery, right, postdoc fellow Blake Rutherford, middle, and Jason Sippel, research scientist with Univ. of Maryland and NASA-Goddard, left, are pictured in front of one of the Global Hawk unmanned aircraft that will gather data of developing weather disturbances during the five-year project.

In 1900, a hurricane generating 140 mph winds hit Galveston, Texas, leaving over 6,000 casualties in what is the most deadly natural disaster in U.S. history. Over a century later, Hurricane Katrina ravaged the Gulf States, devastating communities across the region and killing over 1,800. While hurricane warnings have improved immensely since 1900, scientists are hopeful that further research into the weather systems will allow for improved predictions, and earlier evacuations.

Now, well into into the year’s hurricane season, NPS researchers are part of an effort to determine how those hurricanes form, and what factors contribute to their intensity.  Department of Meteorology Professor Michael Montgomery was invited two years ago to take part in developing a research proposal, the result of which was a $30 million NASA venture-class grant for the execution of the NASA Hurricane Severe Storm Sentinel (HS3) project. The Navy’s Office of Naval Research has also recently signed on to help support the NASA effort.

“NPS brings to the table a long tradition of leadership and expertise in the area of tropical storms, hurricanes and typhoons. The Navy has a lot of interest in typhoons because they are severe weather phenomena in the tropics,” explained Montgomery, “and the Navy has a lot of operations in the tropics. So we work closely with our colleagues at the Naval Research Laboratory, and they have been invited to participate because of their numerical modeling and forecast expertise.”

Led by NASA Goddard Senior Scientist Scott Brown, the five-year project is two years in and giving the research team its first opportunity to get out in the field, gathering real-time data in the Atlantic Basin. NPS Distinguished Professor Russell Elsberry, Professor Patrick Harr, Meteorology Department Research Associate Myung-Sook Park, and National Research Council Postdoctoral Fellows Louis Lussier and Blake Rutherford, will join Montgomery in the month-long field research trip in September. The team will be stationed at NASA’s Wallops Island Flight Facility, where two unmanned Global Hawk aircraft will be used to gather meteorological data from 50,000 feet over the Atlantic Ocean.

“This is our first year in the field, so the exciting thing about this program is these aircraft are different from the other aircraft that have been flying through storms for the past 60 years,” Montgomery explained. “They are able to stay in the storm for almost a day, as opposed to six hours. So they are going to be able to loiter within the environment, crisscrossing the storm, or stay confined within several hundred kilometers of the storm.”

The Global Hawks are equipped with onboard sensors and a dropsonde delivery system to gather temperature, wind speeds, pressure and humidity. The dropsondes are small tube-shaped devices parachuted from the aircraft and designed to gather and transmit data as they steadily fall toward the ocean.

Montgomery and the NPS team are directly involved in researching the genesis, or formation, of the storm. For this, the Global Hawks will implement either a “square spiral pattern,” to encircle and converge on a potential storm, or a “lawnmower pattern” as one uses to mow ones lawn. These flight patterns gather critical readings of the kinematic (wind) and thermodynamic (temperature, moisture) variables necessary to depict the state of the candidate disturbance.

“These patterns are very useful for sampling the deep layer of the tropical atmosphere during the formation process,” Montgomery said. “As the storm forms, it becomes potentially threatening to populated coastal areas like Miami, Charleston, New Orleans and maybe even Washington, D.C., if it shows a track that may head in that direction. 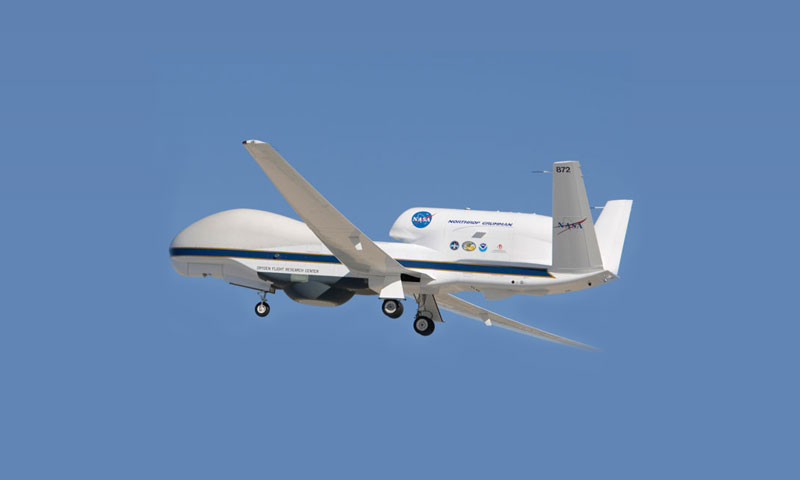 One of NASA’s Global Hawk unmanned aircraft is pictured after takeoff from Edwards Air Force Base, Calif.

“So once the system shows a threat of becoming a storm, then we become interested scientifically because there are still many unanswered questions about how these storms form,” he continued, “and how these thunderstorms consolidate and congeal into one massive storm complex. So these patterns are designed to observe the very early stages of the storm formation to try to answer some questions outlined in our hypotheses.”

Montgomery had previously served as a lead on a National Science Foundation project, called Pre-Depression Investigation of Cloud-Systems in the Tropics, or PREDICT for short. This project was carried out in collaboration with NASA and the National Oceanic and Atmospheric Administration. Through PREDICT and other successful research projects sponsored by the Navy’s Office of Naval Research, the NPS meteorology team has established a presence within the field, and individual expertise that each hopes will contribute to the success of HS3.

“We were selected to participate based on a hypothesis we have for where, when and how tropical cyclone formation occurs in the Atlantic. To test our hypothesis, we are requesting that the Global Hawk aircraft fly over a warm and moist airstream from an equatorial source far to the west of where the tropical cyclone will form,” Elsberry explained. “We all agree that repeated deep (about 55,000 feet high) convective clouds are required for tropical cyclone formation. The different hypotheses concern where and how these deep convective clouds contribute to the formation.

“The observations necessary to test the three hypotheses can only be achieved with the Global Hawk that is capable of flying at 65,000 feet [i.e., above the deep convection] and fly for 26 hours so that repeated observations can be made in the areas where the deep convection might be expected to contribute to tropical cyclone formation,” he continued. “No manned aircraft has the range, endurance, or flight-level capability to conduct such research missions, so it is very exciting to be chosen, as one of 11 research teams from a pool of 45 proposals, to participate in the HS3 program.”

One of those lucky NPS team members is NRC postdoc Lussier, whose expertise in tropical cyclone formation is directly in line with one of the project’s objectives. Lussier explained that the data gathered will add to a growing understanding researchers have of the weather phenomena.

Montgomery added that their ultimate goal, through this and other research opportunities, is to better understand and predict severe weather systems. The team hopes that the HS3 research will not only yield insightful data, but will help test prototype equipment that could also be valuable in future research efforts.

“We are trying to understand more about how these storms form and how they intensify. We aim to use that information to better improve our ability to predict the formation and rapid intensification of these storms. What we don’t want to have happen, and this has happened before, is to have what we call ‘sunrise surprises,’ where we get a storm off the coast and it undergoes a rapid intensification. Under such circumstances, very few people expect to be impacted and many people may be injured, or worse, lose lives.

“We want to be able to better prepare,” Montgomery added. “And the Navy wants to be able to better prepare their fleet and get the fleet out of the way of storms. So they have looked to NPS to bring some of that expertise to help in this project. It’s part of the NPS meteorology mission … to better understand and predict these storms. NPS and the Navy have a vested interest in these severe weather phenomena.”