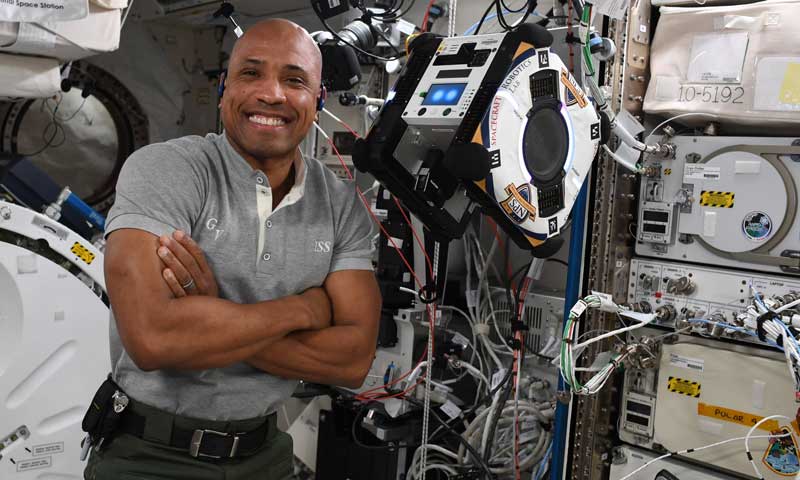 NASA Astronaut and NPS alumnus Navy Cmdr. Victor Glover is pictured onboard the International Space Station (ISS) where the university is currently working with the ISS Research team on the development of new applications of mobility for the Astrobee spacecraft robotic vehicles.

The Astrobatics project, led by Dr. Marcello Romano, aims at developing and testing new dynamic models, and guidance and control techniques for the maneuvering of autonomous robotic spacecraft. The project utilizes the NASA “Astrobee” free-flying robotic vehicle, inside the International Space Station.

NASA’s Astrobees free-flyer, designed by NASA Ames and lifted up to the ISS in 2020, brings a new iteration to these astronaut assistants. They are small, one-foot cube autonomous spacecraft that come with many improvements, including auto-docking capability, artificial vision navigation, and an on-board robotic arm.

The NPS Astrobatics project is currently supported by the NPS Alumni Association and Foundation with a seedling-level gift fund with Romano as principal investigator, and involves critical technical collaboration by NASA Ames Research Center Intelligent Robotics Group, as well as operational collaboration by the Department of Defense Space Test Program.

According to NPS Astrobatics Engineering and Operations Team Lead, Dr. Jennifer Hudson, the team is possibly the first to demonstrate how an autonomous vehicle can use a robotic arm to maneuver an orbiting space vehicle from the surface of another spacecraft. This opens the door for new orbital robotics applications.

"I think projects like ours that are helping to advance robotic capabilities in space are really contributing to this revolution in the technology that's going to enable more and more complex operations in space over the next decade – things that aren't even possible now," said Hudson. "I think we're the first ones who have demonstrated use of a robotic arm to propel a vehicle from one location to another on a spacecraft."

To conduct the first experiment, NPS researchers worked with NASA Ames to upload flight software developed by NPS students. In turn, the flight software took control of the Astrobee spacecraft, and successfully flew it performing  “hopping” maneuvers by using the small robotic arm as a jumping “spring.”

With the first experiment complete, the Astrobatics team has had some time to analyze the data collected, and are determining what series of experiments will be needed for their next iteration.

Dr. Stephen Kwok-Choon, NPS’ Astrobatics deputy team lead, notes the experiment involved eight different self-toss maneuvers that encompassed 18 different runs. Each self-toss maneuver started with the Astrobee grasping on a handrail, then the Astrobee robotic arm was commanded to move to a final flight state, followed by releasing the arm’s grip. This allowed the Astrobee to perform a launch from a handrail projecting itself into motion, explained Kwok-Choon.

"I am grateful and excited to report that overall, the experiment session was a resounding success," said Kwok-Choon." “Our experiment highlighted that both the Astrobee vehicles can be successfully utilized for different payload developers onboard the ISS. This will lead to greater flexibility and coordination for future experiments.”

With the collaboration with NASA's Ames Research Center of Mountain View, California, NPS students, faculty and staff get a unique experience to work on research with space and robotics technology that astronauts on the ISS can test.

“This is special because nothing has been done like this before," said NPS student U.S. Navy Lt. James "Dillon" Summerlin. "Having a free environment using a toss maneuver to move could allow drones to reach spaces that they have never been to before."

Students not only get the chance to work with the NASA team but get to use cutting-edge technology to explore theories.

"Being able to work on these experiments in collaboration with NASA provides an excellent opportunity to expand my experience outside of my military sphere," said NPS student U.S. Navy Lt. Dan T. Watanabe. "To work with actual astronauts on the ISS is not an opportunity that comes around every day."

Hudson said one of the most exciting aspects of this project is the students’ opportunity to work closely with NASA Ames on the development and utilization of the Astrobee, and on the future of spacecraft robotics.

"It's a great educational opportunity for the students in astronautical engineering," said Hudson. "This is a very nice, accessible hands-on project where the students can work on projects in the lab and then see them implemented in space in a very short time frame. We certainly look to continuing that relationship and working on other Astrobee projects in the future.”

The NPS Astrobatics Team stressed that the effort would not have been possible without great support from the NASA Ames Intelligent Robotics Group, Romano noted, whose assistance has been invaluable throughout this endeavor. He added a special recognition for the “excellent work” of current and previous Astrobatics team members who have contributed to the project, and in particular to Dr. Josep Virgili-Llop, Romano added, who left the project in 2019 to become a senior flight engineer in the SpaceX Crew Dragon team.