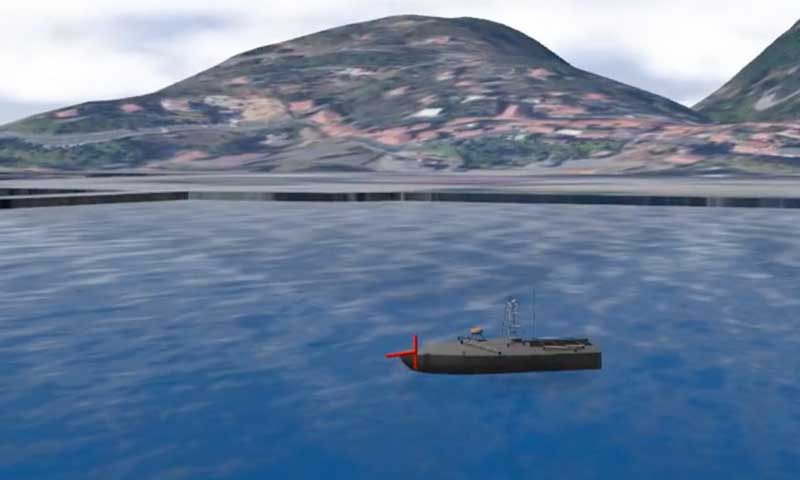 With the challenge of the COVID environment, NPS is partnering with Open Robotics to bring the annual Ocean Robotics Challenge into the virtual environment. Instead of writing code for a physical surface vehicle, teams will program a virtual “common raft” to perform tasks in a virtual marina, which is modeled after the marina of La Spezia in Italy.

The Naval Postgraduate School (NPS) has once again partnered with the robotics research and development company Open Robotics to host a virtual competition on autonomy with the 2020 Virtual Ocean Robotics Challenge (VORC). An international, university-level competition, VORC is designed for both Navy professionals and STEM-students to evaluate the fundamental capabilities of autonomy and maritime robotic technologies.

Originally slated to be an in-person event but modified to due to the coronavirus, the event begins software testing on Nov. 23, and the competition will begin in earnest Dec. 7. Student teams will operate virtual unmanned surface vehicles (USV) within a simulated environment built by NPS and Open Robotics, and will need to direct their vehicles to perform assigned challenges and tasks. In order to do so, the students will need to develop creative solutions to those challenges along the way.

Similar to previous “Virtual RobotX” competitions that initially forged the NPS and Open Robotics collaborative relationship, VORC will consist of teams from institutions and U.S. partner nations around globe to explore fundamental capabilities in robotics. Teams will be evaluated on how their USV performs in station-keeping, wayfinding, landmark localization and characterization, and more, and will be individually scored to determine a winner.

Creating real autonomous vehicles requires collaboration between a team of engineers and programmers. A difficult part of the challenge for these developers is to write and test the software that makes the vehicles autonomous when the testing system itself is still being built. So that is where NPS came in. To build the competition platform, the development team leveraged existing open-source tools that provided a baseline for simulating robot behavior, but then customized it to create a simulation environment targeted specifically toward unmanned surface vehicles.

“We are focusing on virtual environments so we can create a virtual place, and virtual vehicles, where developers can test and produce codes,” said NPS Computer Science Research Associate Dr. Michael McCarrin, who also serves as the technical lead on the VORC project. “Then developers can just plug that into a physical vehicle when it is built. We try to match the virtual challenge to the actual thing.

“We are trying to build something that will allow people to participate,” McCarrin continued. “We want to have a low barrier of entry so we can allow programs that don’t necessarily have the funding to field a physical vehicle but want to get involved on the software side of the challenge.”

Since they will be able to control the elements due to it being virtual, McCarrin thinks the challenge will be more consistent for every competitor.

“We’ve added different models of ships and have simulated winds and currents,” said McCarrin. “For maritime robots, those are the most important factors and wouldn’t necessarily be taken into effect when virtually testing land vehicles. We are able to throw things at the challengers that they have not experienced, and it will make it a little more difficult.”

So far, 10 teams from four different countries have registered to participate in the challenge.

“It’s a great opportunity,” said McCarrin. “We get to work with universities from around the world. We are able to make progress in the development of autonomous vehicles in the maritime environment and create a network for future research projects.”

According to Carlos Aguero, the Open Robotics lead for VORC, the competition is made possible by the specific collaboration between industry and academia.

“[Open Robotics] brings the expertise of general robotics and [NPS] provides the technical expertise in the maritime domain,” said Aguero.  “It’s a very good opportunity for everyone interested in maritime robotics. All you need to join is a computer and time. It should be a fun competition.”