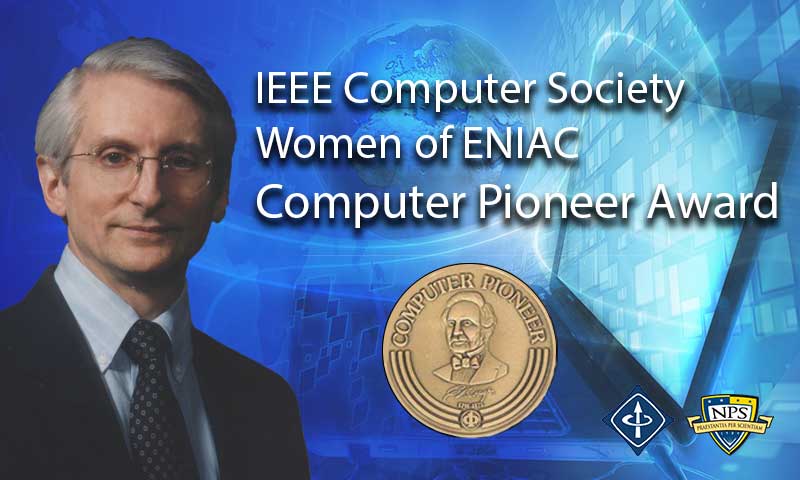 Since 1981, the society has recognized and honored the vision of those who aided the computer industry and presented the award to individuals who in at least 15 years prior contributed to the creation, concepts, and development of the computer field.

"I'm glad that other people appreciate the contributions that I made, and I certainly don't profess to be the only one who made them," said Denning. "When somebody says you were a pioneer and something that they're looking back into the distant past, it made me remember that I worked on those things but am no longer working on them and now I'm working on new things that matter in today's world."

Denning’s early work helped contribute to the creation of the network that connects the world – the Internet. He began his work with the Advanced Research Projects Agency Network (ARPANET), today known as Defense Advanced Research Projects Agency (DARPA). His work on these networks allowed a project, Computer Science Network (CSNET), to be funded by the National Science Foundation (NSF), which helped develop a network only available to DoD personnel before being opened to the public.

“He has, throughout a long career, been renowned for continually introducing fresh perspectives,” added NPS Distinguished Professor of Defense Analysis Dr. John Arquilla. “NPS has benefited tremendously from Prof. Denning's presence in the classroom and from his body of work that has tremendous implications for the Navy and the Department of Defense.”

Denning noted that his work in virtual memory, done as a student at the Massachusetts Institute of Technology (MIT), helped figure out flaws that were slowing down the computers of that age and with his work he was able to increase the speed at which a computer could "think.”

"I think at that time, if we hadn't been able to solve those performance problems, this great invention might not have succeeded," noted Denning. "It would have just faded away."

His expertise in these fields eventually led to developing a curriculum that blended the "flavor" of computing in math and science with the electrical engineering side by running task forces and committees.

"The National Science Foundation decided that it wanted to create a network connecting the supercomputing centers that had been established, and so it took all the graduates of our network and they designed the so-called NSF-net,” recalled Denning. “Connecting all the supercomputers and that, before very long, became the backbone of what we call the modern Internet."

"This was very successful and brought the two major computing societies at the time, IEEE and the Association for Computing Machinery (ACM), into partnership,” he continued. “Ever since that time, they've worked to issue periodic updates to the computing curriculum."

Denning's expertise adds to the education of NPS students who are figuring out leading ways to advance our nation and military by allowing them to learn from a figure who has been there from the beginning of the technology that everyone in the world is using today.

Denning continued, "I think the students find that stuff interesting, to find out that it didn't exist at some point in the past, had to be invented and then it had to grow up into usable technology. I'm an eyewitness to many of those events."

Denning is the second NPS professor to receive this award, the 33rd significant awards of his prestigious career. He is placed among 106 other awardees and 32 charter recipients of the award, one of which was notable NPS Professor Emeritus Dr. Richard Hamming.

“It has been one of the great privileges of my professional life to work with Peter Denning,” said Arquilla. “He is one of the great minds of our time and I am delighted to see that this Computer Pioneer Award is now added to the long list of honors that have recognized his trailblazing contributions.”