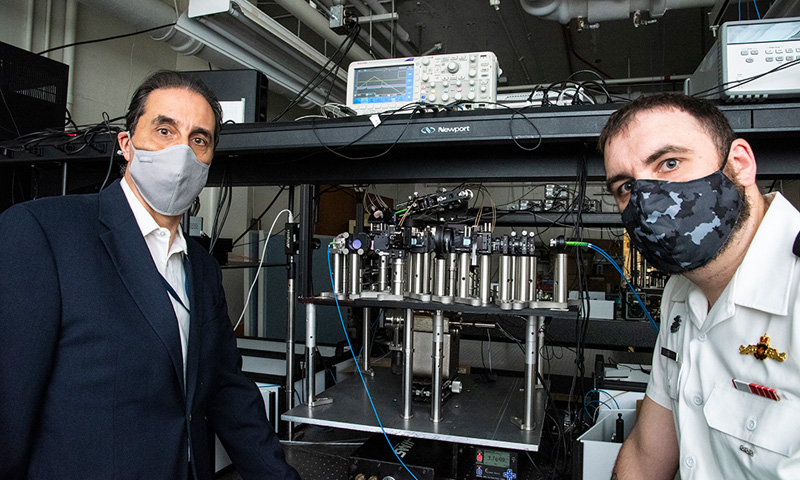 Quantum mechanics, the study of nature at an atomic and subatomic level, is a quickly emerging field of research and technology. This new way to look at the world can improve how we navigate, communicate, compute and calculate, and Naval Postgraduate School (NPS) Physics Professor Frank Narducci is at the forefront of the technology, especially in researching quantum technology with Navy applications.

Narducci and his team of graduate and post-doctoral students currently focus their efforts on quantum sensors that could detect and track platform motion in the absence of GPS capabilities, such as underwater or in space.

Traditionally, submarines use onboard inertial sensors to determine their rotation and acceleration underwater. Often the submarine must come up to check where its classical sensor says it is with where the GPS pinpoints it. Often, the location where the submarine thinks it is, and where the GPS says it is, are not exactly the same. This error is due to a drift in the reading of the sensors, and the inertial sensor can be off by upwards of a mile or more, depending on how long it’s been since the last GPS accuracy check.

“If we have sensors that have low error and low drift, [the submarines] won’t have to come up as often,” Narducci explains.

This would be beneficial for fuel, time and covert purposes. Quantum sensors use atoms instead of photons, and atoms are more sensitive to changes due to their higher mass.

There are two main quantum sensing research projects Narducci is mentoring along. The first is about improving the overall accuracy of the sensor, which National Research Council (NRC) post-doctoral researcher Jefferey Lee is looking into. Generally, measurements over longer periods of time make for more precise measurements, so Lee wants to know how exactly the relationship between time and precision scales and how to change it in an advantageous way. Then he can find a way to maintain higher precision with less buffering time.

The other project, taking place in Narducci’s lab, is the effort of actually building a quantum sensor. The sensor requires two parallel atomic beam atom interferometers to differentiate between rotation and linear motion. A previous Ph.D. student created one laser, and now Royal Canadian Navy Lt. Cmdr. Darryl Gervis is building the other.

Many of the basic tools used in Narducci’s lab are derived from research done by Dr. William Phillips, who works at the Joint Quantum Institute of the National Institute of Standards and Technology (NIST), and the University of Maryland (UMD).  Phillips lectured at NPS on Quantum reformulation of the Metric system during a recent SECNAV Guest Lecture (SGL). Narducci and his students use those tools, and then modify the tools as they need.

A key player in quantum research, Phillips won a Nobel Prize in 1997 “for development of methods to cool and trap atoms with laser light.” Phillips is excited to see where Narducci and his students are taking quantum technology.

“[In the beginning of quantum research,] we weren’t really interested in making the best use of these things because we were at the stage where no one had ever done this before, so we just wanted to show it was possible,” Phillips explains. “Frank’s taken [quantum technology] to the next step of refining these things, making them more sophisticated than the really crude things that we were doing in the early days.”

The “things” to which Phillips is referring to are the quantum sensors Gervis is working to improve, but also structures like atomic fountains, which throws up atoms so that when they’re falling, they’re slow enough to use for measuring things like time, gravity and gravity gradients. Narducci is overseeing a project to build one of the largest atomic fountains in the world in a retired NPS elevator shaft. It’ll be 30 meters high, allowing for scientists to measure freefalling atoms for a longer period of time.

Overall, the larger goal of all of this effort is to see an interest in quantum, and research capabilities,  grow on campus.

“What I’m hoping, in kind of the longer term, is [for NPS] to be the Navy go-to for quantum technology in general,” Narducci says.