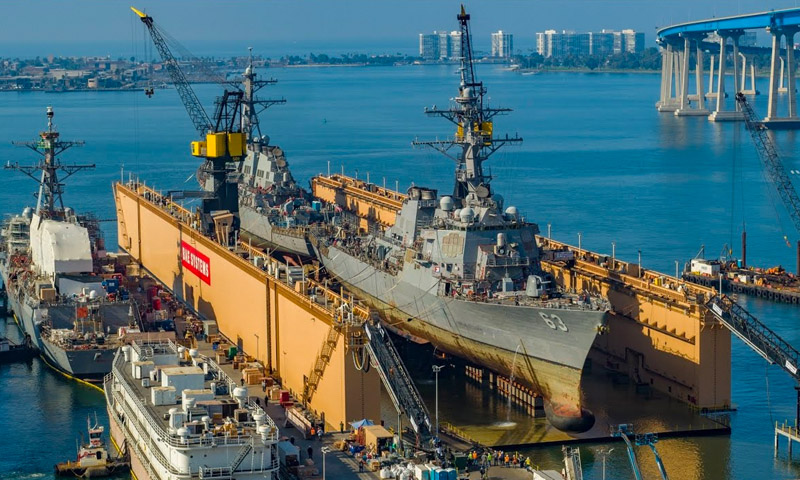 The Mills Medal, awarded by the Naval Postgraduate School (NPS) Alumni Association and Foundation, recognizes research that has had a clear impact on the Navy’s operational efficiency. This year, the award was presented to NPS operations research professor Kyle Lin who developed an algorithmic tool, the Surface Ship Drydock Schedule Planner (SSDSP), to optimize naval drydocks and help simplify scheduling.

Lin was connected with the research sponsor Robert Sparks of the Naval Sea Systems Command (NAVSEA) through the Naval Research Program (NRP), Sparks recently presented the SSDSP at a conference, and it was a hit.

“I was very fortunate to have him. His thesis was on forming the mathematical model and he wrote a lot of codes to implement the model,” Lin says.

He and Hilliard developed the intuitively designed SSDSP tool, which takes the information of each incoming vessel and determines the best place for it to go. The algorithm will take in factors such as the type of ship coming in, how much space it will need, when it must dock and for how long, where the home port is, drydock availability, government quality control (via the Naval Supervisory Authority) requirements and the maintenance that is needed. The Optimized Fleet Response Plan (OFRP) is like a complex game of Tetris.

“You move the pieces into places and try to minimize the holes,” Lin says.

Through streamlining this process, Lin especially wanted to better implement double docking when needed. Double docking allows two ships with similar schedules to berth at the same drydock. This method maximizes space available at each location but will only work if schedules are maintained. Schedule delays are a common reality that the SSDSP hopes to limit.

Besides scheduling when ships should go where, the tool allows operators to test out different hypothetical situations and better understand how different scenarios would impact schedules. For example, when asked what a pandemic could do to drydock scheduling, Lin says it would most likely slow all the processes down due to lack of workforce.

“You can go to the model and say, ‘We originally anticipate another 50 days to finish, and when the pandemic slows everything down by double the time, 50 days becomes 100.’ You can then run the model to see the trickle-down effect,” Lin explains.

“Professor Lin’s research, for which he was awarded the Mills Medal, represents all the things that make NPS such an exciting place to be for students, faculty and staff and such value-added to the Navy, Marine Corps and the nation,” says Marine Corps Col. Randy Pugh, NPS Associate Dean of Research and chair of the Mills Medal selection committee.

“Lin’s extensive expertise in operations analysis, complemented by his student partners’ professional experience, applied to real-world naval problems and fully supported by Navy leadership resulted in recommendations that will save millions of dollars while simultaneously increasing warfighter readiness. It was a tremendously skillful application of the science of war.”