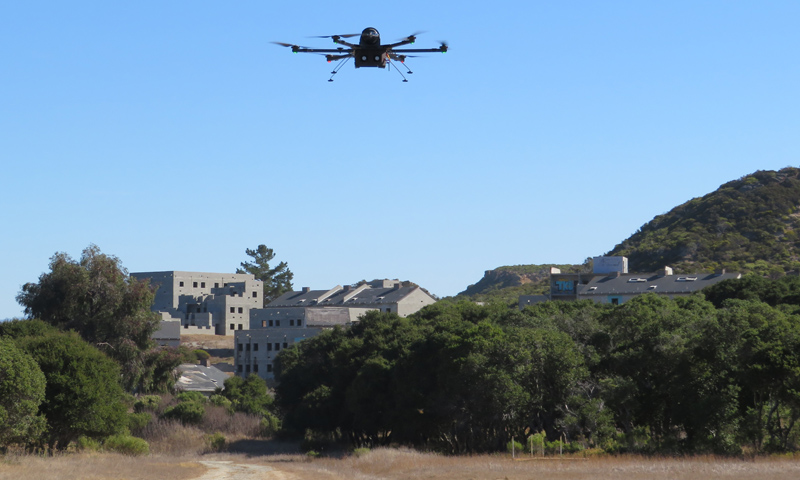 With the help of several NPS students, Dr. Anthony Gannon is exploring innovative methods to produce hydrogen fuel utilized by various current and possibly future Navy platforms, like this hydrogen-powered UAV flown by NPS researchers at the Military Operations in Urban Terrain testing facility in the former Ft. Ord.

Imagine a machine that collected water from the air, broke the water down into hydrogen and oxygen, then used hydrogen as a power source. That’s the goal of Dr. Anthony Gannon, associate professor at the Naval Postgraduate School’s Mechanical and Aerospace Engineering (MAE) school, and his rotating group of thesis students, who are applying their interdisciplinary education and research to support developing these new capabilities. Gannon has been working with students towards this goal since 2016.

The original idea was just the first part, collecting moisture from the atmosphere, but then MAE Chair Dr. Garth Hobson pushed Gannon to go further.

“When he saw what we’ve done there, he said, ‘You’ve got electricity and you’ve got water, so you might as well make hydrogen,’” Gannon says, recalling the conversation between him and Hobson.

Being able to get energy from moist air would reduce challenges in transporting fossil fuels to bases in deployment locations. Hydrogen is also lighter than other forms of fuel, which would be advantageous for running small devices off submarines, hypothetically fueling drones from the surrounding water instead of going up to be refueled. Finally, hydrogen power can be used as a method of storing excess energy produced by renewable sources.

Gannon proposed the idea to the Office of Naval Research (ONR), who now funds the research. Since then, he’s found a number of students interested in helping at each part of the energy generation. They are only using technology that is commercially available for practical reasons.

Hydrogen is traditionally produced as a byproduct during natural gas reforming when natural gas is hit by high pressure steam. The hydrogen is then usually transported in bottles on trucks or via pipeline. With economical or environmental considerations in mind, U.S. Navy Lt. Joshua Lewis is looking to produce a small, compact and mobile system that captures hydrogen from the air.

“If I create a mobile system that runs on renewable sources, I can drop this thing anywhere in the world and start producing hydrogen gas,” Lewis explains.

He envisions using this method of hydrogen energy production to power drones, like a commercial medical drone that currently runs on batteries. It would decrease the turnaround time for these systems because the operator would no longer have to wait for the batteries to charge.

His system involves a dehumidifier to take moisture out of the surrounding air, an electrolyzer to separate the hydrogen from the water collected, and a compressor to compress the hydrogen. All these systems would be solar-powered. Navy Ensign Charles Heaton has been working closely with Lewis to power hydrogen generation on solar and to automate the whole process.

Navy Lt. Emille Nicholas Perez is working to convert a small industrial engine to run on gas. Traditionally, these engine runs on a kerosene and synthetic oil mixture for both fuel and lubrication. Perez wants to create a baseline for the engine to run on gas, and then another student can pick up where Perez leaves off to shift the engine from running on gas to hydrogen.

Meanwhile, Ensign Ethan Hardt is picking up where a previous master’s student Ensign Brianna Kaufman left off, converting a natural gas and propane-powered turbine to run on hydrogen power instead. His predecessor developed the hydrogen supply system and was able to run the retrofitted system for a short period of time.

In addition to all these individual projects, the team is working to run a quadcopter on a hydrogen fuel cell. While current copter designs are not optimized for being run on hydrogen, Gannon says that running it on hydrogen could increase the run time from 20-30 minutes to up to 180 minutes.

In addition to their research, Gannon says his students, Gannon says, have NPS students are known to be excellent translators of operational needs into solutions.

“They’re very keen and very bright, and some of the guys who have been on tour, they have practical insight,” Gannon says. “Once we bring them up-to-speed on the analysis side, they are powerful because they can bring the analytical tools and experience together.”