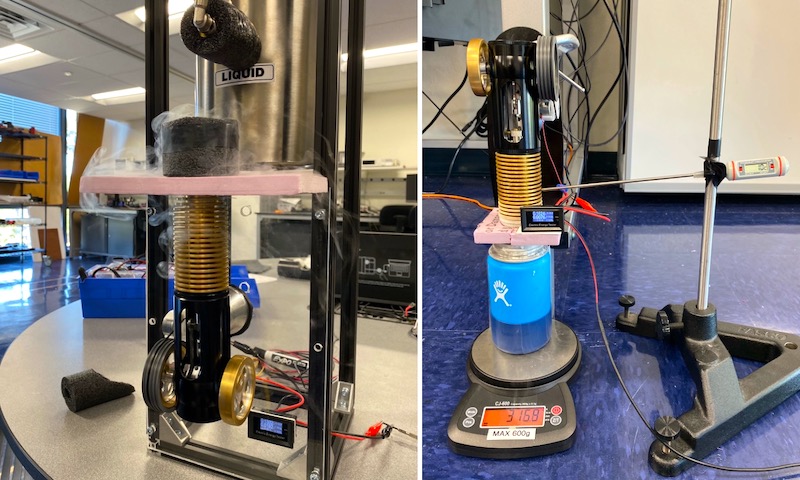 “This is a technology that has the potential to shape things we do in life,” said Pollman.

Put simply, the dual-Stirling engine is capable of utilizing stored excess energy generated by renewable sources like solar and wind, so it can be utilized when and where it’s needed most. Unlike other systems using compressed air energy storage, the NPS team’s discovery would not require large tanks for storage, or the geographical constraints that hydro-electric recovery systems require.

“The greatest benefit of this type of energy storage system using liquid air, is that the resource is all around us. It’s free, and has no carbon footprint. And it can be built anywhere. And the Stirling engine is also scalable,” Pollman said.

The history of the Stirling engine began as a competitor to steam engines in the early 1800s. Unfortunately, inefficiencies in the engine’s work cycle could not keep up with a sustained and heavy workload, so its practical use was largely confined to low-power domestic applications.

But, as Pollman quickly noted, the Stirling “is a system that would be used in a micro-grid environment,” he said.

This type of engine would augment renewable energy systems which encounter curtailment periods, like wind, hydro-electric and solar panel farms. Curtailment is the reduction of output of a renewable resource below what it is capable of producing.

The two NPS students included on the patent are a couple of years removed from completing their NPS studies. Bailey and Girouard are now working at Naval Shipyards on opposite coasts, and are getting ready to transfer to new jobs following their two-year Engineering Duty Officer qualification tours at Puget Sound and Portsmouth, respectively.

The news about the team’s patent award was a pleasant surprise, as they didn’t hear about its issuance until a technology reporter published a piece about it from information he gathered from the USPTO Gazette for Patents publication.

“Wow! This news was out of the blue,” said Bailey. “To learn that our theses have advanced liquid-air technology a little further is very cool. My mom was very proud of me when she found out.”

Girouard was just as surprised to discover the possibility of a patent for his contributing thesis in the Stirling engine research.

“I had to ask, is this really going to work? And as we went along, I was really pumped to see how this was going to turn out in our search for an energy storage solution for liquid air,” said Girouard.

“The experience that we had in designing and building the prototype was interesting,” said Girouard. “Most of the time these [engines] are used to keep highly-sensitive electronic equipment cool rather than generating a phase change for energy storage.”

While Girouard worked on the charging and containment of the system, Bailey worked on the recovery of the heat exchanger to minimize loss. Another key benefit of this type of energy generation is the low maintenance power requirements for the system itself.

Bailey said it was an incredible feeling to have the initial prototype work.

“Chris and I worked for over a year using modeling tools that proved that the system could work, but until we saw it actually turn the engine for the first time, we couldn't be sure,” said Bailey. “While the initial prototype was inefficient due to design and manufacturing tradeoffs for time, we were able to prove that such an idea had merit and even potential use cases.

“As for scalability, I believe that for [limited] building size, isolated microgrids, this LAES system could solve resiliency troubles seen with renewable sources like wind or solar energy sources,” Bailey continued. “Such use cases even have some applicability inside the Department of the Navy like small Marine detachments forward deployed away from infrastructure.”

Currently, Bailey is anticipating a new set of orders following his two-years at Puget Sound Naval Shipyard. Girouard is now heading to Naval Surface Warfare Center Philadelphia to be the Program Managers Representative (PMR) for the FFG-62 Land Based Engineering Site, where the team is building the propulsion plant for the Constellation Class Frigate to test prior to the operation of the full vessel.