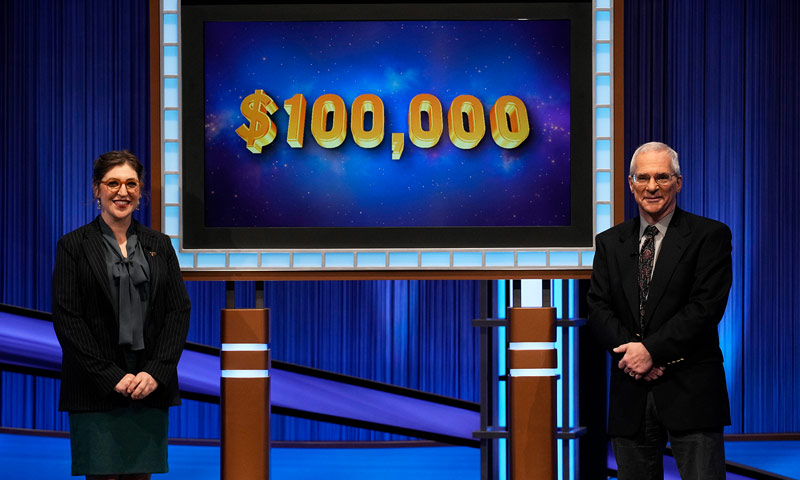 The Naval Postgraduate School (NPS) professor will forever be memorialized as a trivia answer – phrased, of course, in the form of a question – for avid fans of the hit TV quiz show “Jeopardy!”

Buttrey, an associate professor in NPS’ Operations Research department, was the big winner in the inaugural “Jeopardy!” Professors Tournament, which was recorded in Los Angeles earlier this fall and televised Dec. 6-17.

“Of course, I’m gratified to have played well – even recognizing that there is a substantial dose of luck in the game,” said Buttrey, who was on campus Dec. 17 to watch his victory in the tournament’s final episode on TV with other NPS faculty and staff members. “The actual game play was a lot of fun for a big ‘Jeopardy!’ fan like me, too.”

During the tournament, hosted by Mayim Bialik, Buttrey matched his knowledge against 14 other professors from universities and colleges throughout the United States.

After winning his first two matches in the first round and semifinals, Buttrey advanced to the two-day finals against Ed Hashima, a history professor at American River College in Sacramento, and Alisa Hove, a botany professor at Warren Wilson College in Asheville, N.C.

Buttrey compiled the highest cumulative total score during the finals, which were televised on Dec. 16 and 17, and captured the tournament’s grand prize of $100,000, as well as a berth in the show’s 2022 Tournament of Champions. Hashima, who finished second, earned $50,000, while third-place finisher Hove earned $25,000.

“All of us at NPS are extraordinarily proud of Sam for his performance during the tournament and for the way he’s represented our school, the U.S. Navy and Marine Corps, and all of our military students who attend NPS,” said the president of NPS, retired Vice Adm. Ann E. Rondeau. “Like all of our talented defense-focused faculty members, Sam is not just an expert in his field, he is also dedicated to serving those who serve our nation in uniform. As Sam himself has pointed out during the tournament, ‘Just because you graduated doesn’t mean you stop learning,’ and that’s a valuable lesson for all of us.”

It has been a whirlwind two weeks for Buttrey, who said that he enjoyed his time on the “Jeopardy!” set with his fellow professors.

“I think the whole process could have been intimidating, but instead it was like a weird camp holiday punctuated by bouts with makeup technicians and hair stylists,” he said. “The COVID protocols at the taping were very strict, and we weren’t permitted to use our mobile phones, so I got to spend a lot of time with the other contestants, and they were uniformly very smart and funny and interested. I made genuine friends, and that’s rare enough in the world.”

In the span of the tournament, Buttrey was not only noted for his quick wit, but also for his uncanny resemblance to comedian Steve Martin – something which was pointed out by multiple social media users and news outlets.

“It’s been very entertaining for me – I can’t speak for Steve,” Buttrey said. “Steve Martin is not only hilarious, he’s also a serious author and talented musician. I have been told I look like him for years, but I think I saw the resemblance most clearly on the ‘Jeopardy!’ cameras. Sadly, though, I never get compared to the famously good-looking people like George Clooney or Brad Pitt or Halle Berry. Still, this instant internet-era fame has been a little weird and a little fun – I don’t expect to experience anything like this again.”

While he will eventually return to the “Jeopardy!” set for the Tournament of Champions, Buttrey is looking forward to a well-earned break for the holidays before returning to school in time for NPS’ winter quarter.

“I think this level of public scrutiny can start to get not just distracting, but exhausting,” he said. “I have no idea how Steve Martin gets through life. I will definitely have enjoyed my 15 minutes of fame, but it turns out that that’s just about the right number of minutes of fame. I’m looking forward to getting back to regular life.”