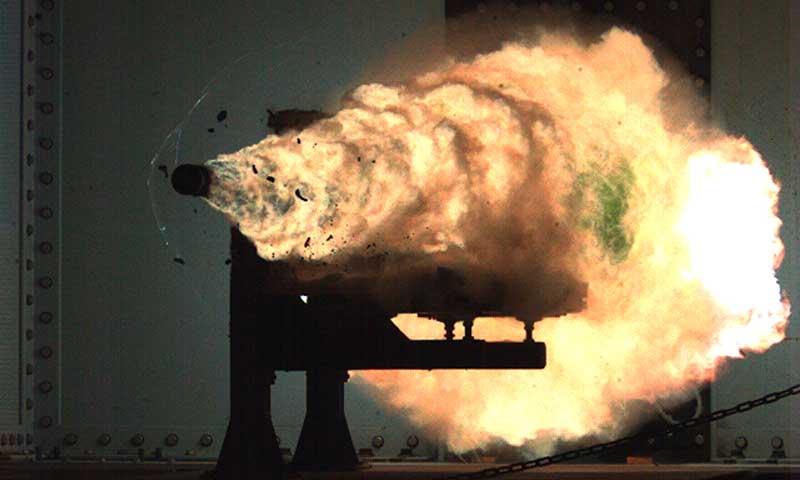 Advancements in railgun and hypervelocity projectile research since this 2008 test-firing at NSWC Dahlgren have led to promising operational possibilities. The concurrent development of NPS’ capacity to teach and perform research in the tech space is producing alumni prepared to lead its development to the operational force.

Since its establishment approximately two years ago, the Naval Postgraduate School's Railgun Laboratory – the largest of any academic institution – has empowered students and faculty with the facilities to conduct advanced, applied research in hypervelocity projectile (HVP) technology. But advanced technologies aren’t the only result …  In fact, the lab has quickly become a critical asset in equipping alumni to be enduring technological leaders in the HVP space, ready to make an immediate impact in the fleet after graduation.

McGlasson, who just completed his PhD in Applied Physics at NPS furthering railgun research – a technology that uses Gun Launched Guided Projectiles for anti-air and surface missions – also helped commission the NPS Railgun Lab in 2018. He used the lab's initial research results to establish credibility for its simulations positioning the Railgun Lab today to successfully explore the challenges associated with electric weapons.

“The railgun research that we do here is not only for student projects or learning purposes,” said McGlasson. “We’re executing experiments sponsored by the Office of Naval Research, collaborating with a variety of research labs and universities. The discoveries that we make [at the Railgun Lab] would improve any kind of gun-based defense, which is a new approach to doing shipboard missile defense using guns instead of missiles to defend against missiles. Using guns to defend against those kind of threats helps preserve our own missiles for a higher-end threat.  This would be in addition to the surface strike mission, in which the railguns being tested at Dahlgren and White Sands can reach over 100 nautical miles.”

McGlasson noted that railguns will benefit from continued research and that he hopes the Railgun Lab will continue to help faculty and students conduct that research.

As for Cross, a 2018 NPS alumnus, he put his education to immediate use at NSWCDD and was recently awarded the C.J. Rorie Award for his impact on the Navy’s Gun Launched Guided Projectile program at the warfare center in Dahlgren, Va.  The Rorie Award – named in honor of retired Rear Admiral C. J. Rorie, a former warfare center commander and NPS alumnus– recognizes excellence in performance of military personnel who contribute significantly to the effectiveness of the division’s operations.

According to command officials, Cross was recognized for outstanding leadership in the Gun Launched Guided Projectile effort leading a successful fielding of a guided projectile.

“I was able to work with some amazing scientists and engineers at Dahlgren,” said Cross. “The people and technology that are present here [in Dahlgren] are definitely world class. My time at NPS and my thesis research there made for an easier transition to the work at Dahlgren.”

Prior to being a technological leader at NSWCDD, Cross' NPS research focused on how electromagnetic contacts coated with carbon nanontubes (CNT) could be applied to modern day weapon technology. Cross conducted his NPS thesis research at the NPS Railgun Lab, albeit while it was still under construction.

While the burgeoning Railgun Lab enabled Cross’ research, NPS’ multidisciplinary education prepared him to apply it, and to be a critical thinker and leader in the field.

“NPS prepared me by educating me into the science, technology, and real-world applications for which I have been working,” said Cross. “In addition to a fundamental grasp of the scientific principles, I also received a bedrock foundation of how federal acquisition regulations work, and the systems engineering courses also taught me the fundamental principles of how the ‘system of systems’ work together to bring a new capability to the fleet and warfighter.

"All of this enabled me to hit the ground running in [Dahlgren] and understand the avenues a program can take to get capability to the warfighters as fast as possible," continued Cross.

Whether developing railgun technology at NPS or NSWCDD, Cross agreed with McGlasson that railguns are appearing to be a more cost-efficient warfighting capability.

“Railgun and HVP technology would allow for far cheaper options to counter adversarial threats,” said Cross. “When you look at engagements, the cost per engagement becomes an issue that must be addressed for protracted conflicts. The logistics of having the depth of fire with HVPs, operating at their maximum capability, on shooting platforms starts to become extremely attractive.”

From the new Railgun Lab to the traditional classroom, Cross expressed that he’s the perfect example of how NPS can transform its military officer students into innovative leaders who can respond to emerging military needs.

"The science, curriculum and personal experiences [at NPS] are unmatched," said Cross. "What I learned via the curricula, faculty and my fellow students positioned me to lead, excel, and make an immediate impact after graduation."