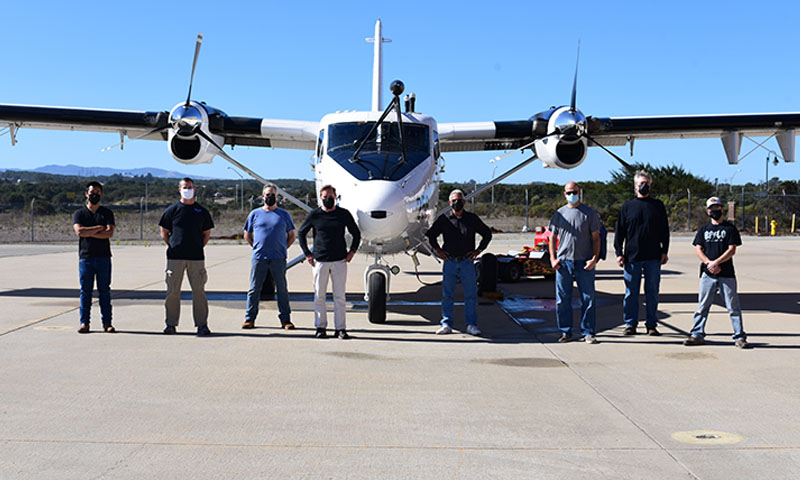 As the recent Monterey county wildfires burned more than 150,000 acres, Naval Postgraduate School (NPS) researchers took to the local skies in a specially-equipped deHavilland Twin Otter UV-18A aircraft, basically a flying laboratory full of scientific instruments, to research the effects that smoke has on the atmosphere to help better understand how smoke can affect optical and infrared sensor performance, and to test how well Navy aerosol models do in predicting smoke conditions.

Since the COVID-19 pandemic began in March, NPS’ aerial researchers from the Department of Meteorology’s CIRPAS Airborne Research Facility had not flown a research mission, that is, until these wildfires presented a key opportunity for study that could lead to improved naval operations.

The research team, consisting of NPS Meteorology Research Professor Dr. Anthony Bucholtz, Research Associates Ryan Yamaguchi and Roy Woods, and five others, conducted 15 five-hour flights sampling the air from the lowest possible altitudes to higher than 20,000 feet. They did so with three goals in mind.

“First, we wanted to understand the effects of smoke on the radiative balance of the atmosphere,” said Bucholtz. “The second was to study the characteristics of the sea salt particles over the ocean and lower atmosphere. And the third goal was to gather data to test Navy global and regional aerosol models.

According to Yamaguchi, who had to personally evacuate from his home due the wildfires, the team was collecting smoke data to ultimately help improve one of the Navy’s key weather models – the Coupled Ocean/Atmosphere Mesoscale Prediction System (COAMPS) – developed by researchers at the Naval Research Laboratory (NRL) and used by the Fleet Numerical Meteorology and Oceanography Center for short-term numerical weather prediction for various regions around the world.

“For collecting smoke, we have an intake on the front of the aircraft and we can draw in outside air into our different aerosol instruments that can measure the size, scattering and absorption qualities and the concentration of the smoke,” noted Yamaguchi.  “We also have advanced data acquisition systems that measure humidity, wind, pressure and standard atmospheric variables in the nose of the aircraft.”

Bucholtz and Yamaguchi studied a wide variety of types of smoke during their flights in order to better understand different environments and variables.

“We looked at young smoke near the fire, aged smoke far away from the fire, and smoke at multiple altitude levels,” said Bucholtz. “We sampled the smoke over land, over the ocean and over clouds, so we got an amazing data set.”

While the two researchers still need to dive deeper into their data for a full analysis and its implications, they already have requests from researchers at Arizona State University, the California Institute of Technology and NRL to view the data, which the two are confident they will be able to use to better understand the effects of atmospheric smoke and improve the Navy’s operations in a smoke-filled environment.