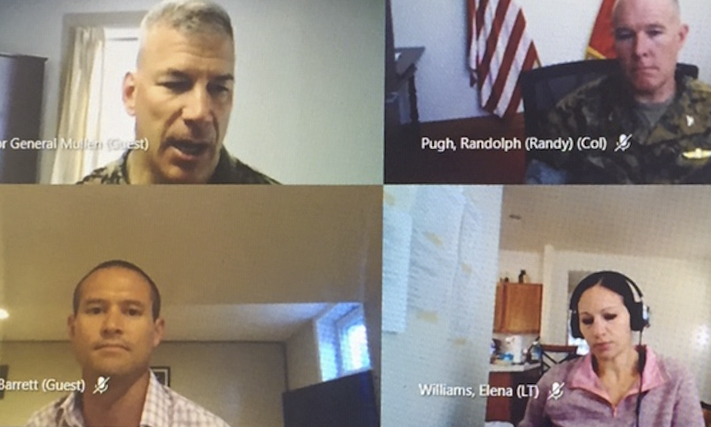 National defense and military strategies alike are increasingly emphasizing the link between higher education and warfighting advantage, keying on advancements in critical thinking as a vital enabler and key skill for strategic leadership.

The National Defense Strategy, the Commandant’s Planning Guidance, the Department of the Navy’s Education for Seapower Strategy, and even a recent Chief of Naval Operations fragmentary order all call for the intellectual development of warfighters to improve critical thinking and interdisciplinary learning skills, as the nature of conflict changes, moving beyond the industrial age and into the cognitive and information age. Additionally, the National Defense Strategy directed military institutions to focus on critical thinking to encourage innovation.

Responding to this strategic guidance, Professor Mie Augier of the Graduate School of Defense Management, and a founding member of Naval Warfare Studies Institute, developed the new course, focused on how to cultivate some of the central skills, attitudes and aptitudes to think critically, and using those to strategically lead warfighting organizations.

“The course examines key warfighting leaders and thinkers to understand and link their decision making to the underlying concepts and practices in critical and strategic thinking,” said Augier. “Moreover, we learn and discuss perspectives and ideas for how to be better strategic and critical thinkers, including how to cultivate lifelong learning, and being able to reframe problems to make sure we have better insight and understanding of them from different points of view.”

Mullen emphasized themes such as the importance of dedicating oneself to learning as an essential element of professionalism, and of viewing the brain as a muscle that, like other muscles, needs exercise to avoid atrophy.

“He noted the importance of deliberately reading broadly to cultivate intellectual range, insight and the ability to think critically,” said Augier.

Mullen’s discussion with the class gave a lasting impressing on the students and altered the way some thought about education, and how they should continue to strengthen their minds.

“Mullen’s discussion has forever changed and influenced my prior thinking regarding reading,” said NPS student U.S. Navy Lt. Elena Williams. “One thing he said that stuck out was, ‘We view reading as work and not a leisure activity.’ Prior to his discussion, I thought of reading as work so I need to alter my perception and predetermined feelings towards reading to consider it an opportunity rather than a chore.”

A later discussion featured retired Marine Corps Gen. Al Gray and Col G. Wilson discussing topics that had been examined in the course in the context of Gray’s own strategic leadership of the Marine Corps when he was commandant.

Many of the themes discussed with Gray tied back to his strategic leadership and transformation of the USMC around maneuver ideas. For example, as Commanding General in the 2nd Marine Division, he developed a package of literature on maneuver warfare, set up a professional study group as well as a maneuver warfare board.

After hours discussions were focused on the merit of ideas, not rank, and during after action reviews, he was focused on what the Marines did and what they were thinking about it, more than ‘what’ they did – cultivating thinking and an awareness of the thinking and learning process. When Gray became Commandant, he institutionalized the intellectual renaissance underlying maneuver warfare; publishing a reading list for all Marines; revising the Marine Corps Institute’s professional education curriculum, revitalizing the Command and Staff College curriculum and faculty, and founding Marine Corps University (MCU). His vision for the Marine Corps PME system was to teach critical thinking and judgment, not material to be memorized; and using active learning approaches.

The discussion with Gray and Wilson was a fitting conclusion for the course. Students had studied critical thinking, interdisciplinary learning, and how to use critical thinking in strategic leadership, and immediately got to the key points of the Maneuver Warfare Movement and quickly related it to the earlier discussions about the importance of lifelong learning. The lively interaction also included the importance of education at all levels –beyond school – and broad reading, which was also a theme emphasized by Mullen.

NPS continues to push the boundaries on education and innovation, Augier says, and the Critical Thinking for Strategic Leadership course is another example of how NPS is responsive to Navy and Marine Corps needs in a rapidly-changing world environment.

Feedback from the inaugural, interdisciplinary cohort of students representing three of the university’s four graduate schools was very positive. As Marine Corps Maj. Philip Schmitz noted, “The learning and discussions facilitated in this class are some of the deepest discussions I have been a part of in 18.5 years in the military, and it shouldn’t have taken this long for that to occur. I walk away from class with more energy than I started with—that to me is profound!”