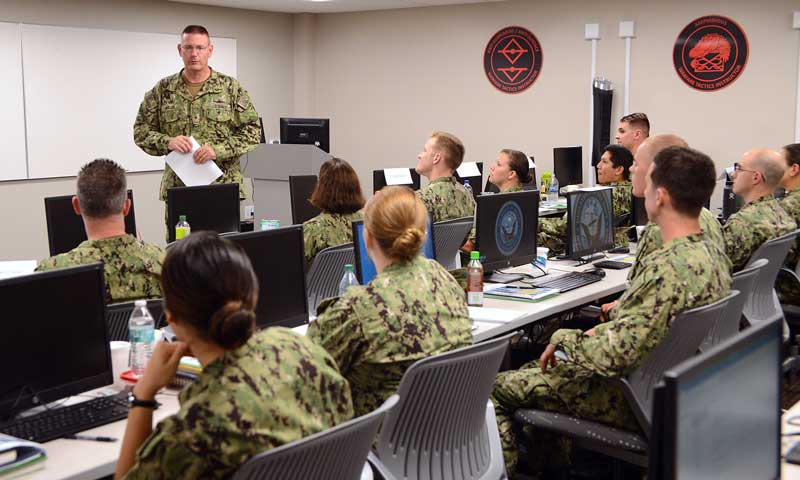 The Naval Surface and Mine Warfighting Development Center (SMWDC) is sending Warfare Tactics Instructors (WTI) to NPS as part of a new pilot program, allowing select WTI students to complete their master’s degree, gaining the academic theory behind their tactics, and increasing the lethality and tactical proficiency of the Surface Force.

A pilot program at the Naval Postgraduate School (NPS) is taking fleet Warfare Tactics Instructors –officers with specialized training, operational experience and a deep understanding of fleet tactics considered to be tactical subject matter experts – and giving them the academic theory behind those tactics to make them even better warfighters.

The genesis of the NPS “WTI Scholars” program began when leaders at SMWDC saw a return on investment from officers in the WTI program who already had an NPS master’s degree, or were earning their degrees through NPS’ distance learning program.

According to Capt. Ryan Billington, the Assistant Chief of Staff for Training, Operations, and Readiness at SMWDC, there was a key difference for officers with an NPS education.

“Officers with master’s degrees from NPS bring a deep understanding of systems, tactics, and processes,” said Billington. “These officers are incredibly well-rounded, for they are well versed in tactics as a WTI and also understand the concepts behind them because of their NPS graduate education, and we value the education those officers are receiving.”

The WTI Scholars pilot program, which currently has 4 students with the aim to double that or better in 2021, is designed to tie academic theory with the operational experience of these advanced tactically-trained officers to create even greater warfighting capability, said Capt. Chuck Good, NPS’s Surface Warfare Chair.

“We are adding the academics to the intense real-world experience they’ve amassed so they have ‘the why’ behind their tactical principles,” said Good. “By understanding ‘the why’ these officers will have greater warfighting proficiency making them better practitioners – something that’s greater than the sum of its parts.”

While there are four different types of WTI areas – anti-submarine warfare surface warfare, amphibious warfare, mine warfare and integrated air and missile defense – Good noted that NPS did not have to create any special curriculum to match them; rather, NPS leveraged the curricula and capabilities it already had and folded each WTI type into them.

“We had nine different curricula already available in our catalog for the WTI’s to take advantage of that map directly to their core warfighting competencies,” said Good. “The thesis work that they are doing is all warfighting related. NPS and SMWDC are working together to improve and enhance an officer’s warfighting capability at key points in a surface warfare officer’s career.”

One key educational challenge facing WTIs is that many of them have had to forgo the opportunity to obtain graduate education due to the WTI career path constraints precluding lengthly in-residence educational tours. NPS has stepped in and shortened certain curriculums programs allowing WTIs to obtain an accelerated master’s degree in order to get back to the fleet in a reasonable time to fill key billets. The price for this is the elimination of certain milestones that a full-length resident NPS curriculum typically provides, such as JPME Phase I and a subspecialty code but the core Masters’ requirements are still met in all nine “WTI Scholars” offerings.

“Junior officers often desire to do both in-residence education at NPS and complete the WTI course of instruction and follow-on production tour,” said Billington. “However, not everyone has the career timing to do both before department head school. The WTI Scholars Program gives them the ability to complete both the WTI course of instruction, a WTI production tour, and graduate education in residence at NPS.”

While in-resident education at NPS and being a WTI was not mutually exclusive prior to the WTI Scholars Program, there wasn’t a direct route for students to directly build off their WTI training with further academic education. According to WTI Scholar Lt. Grant Arrigo, one of the first four students currently in the pilot program, this program allows him to be a WTI and a forerunner in the field of space, especially with the emergence of space as a realm for military operations.

“From the fleet, space is very important from a targeting and communication standpoint” said Arrigo. “Having the background for the surface WTI program, I know that targeting is always your limiting factor and space is the next frontier for that. As far as the whole breadth of space operations goes, I can apply my NPS education to any combat system. I’m interested to see how I will be able to take everything back to the fleet and be better informed on the strategic policy side of the house, as well as the technical side.”

Good noted that the relationship between NPS and SMWDC will flourish simply because of the cross pollination of highly educated officers coming to NPS and returning the fleet.

“These officers will be bringing relevant and current tactical information up to campus, and then they’ll take their academic knowledge back to the waterfront.”

As for SMWDC, Billington expressed that WTIs are “warriors, thinkers, and teachers,” and when these tacticians return to the fleet from NPS they will have become exceptional warfighters.

“An officer who has completed both WTI training and NPS graduate education program will be the most lethal and tactically proficient tactical action officer on their ships because they have the requisite background knowledge both in the classroom and in relevant community tactics,” said Billington.