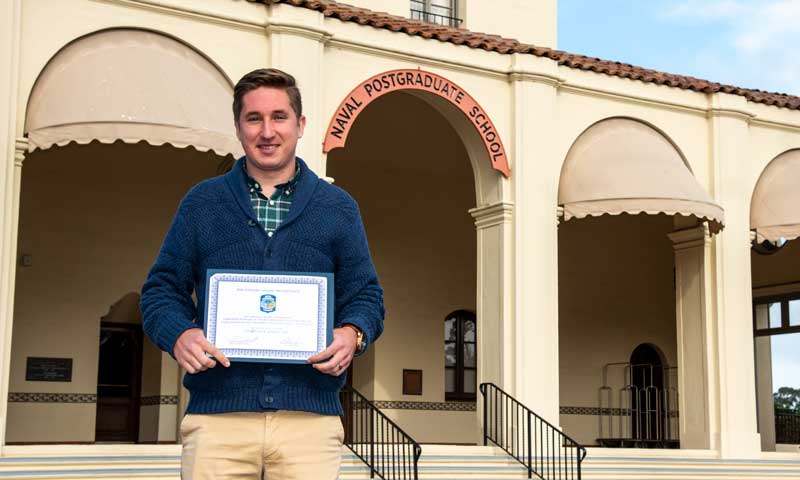 The Submarine League Literary Awards are intended to encourage critical thinking and discourse, sharing innovative thought on key issues facing the submarine community. The award is actually not the first NRL Literary Award for Hilger, who was honored with the top spot in the competition while he was a student on campus in 2012.

For current student Lowry, an exploration of how the U.S. submarine fleet has been utilized in conflict since WWII, through an analysis of two case studies, provided the foundation for his award-winning submission.

Lowry’s analysis of the United Kingdom’s use of nuclear-powered submarines during the Falkland Islands War, and Pakistan’s utility of diesel submarines during the Indo-Pakistani War, each offered a compelling use of these critical assets, even if they weren’t actively engaged in direct conflict.

Lowry said he was proud to be selected, and gave credit to his NPS studies in helping craft his article.

“I’m very honored to have my paper selected,” he said. “I hope it reminds people of the capabilities and threat that submarines can bring to the fight and why we should continue to invest in them.”

Retired Navy Rear Adm. Jerry Ellis, NPS Undersea Warfare Chair, expressed his own pride in having the university well represented in the competition.

“I’m very proud of both of these great students … I think this is a big plus for this institution to have two active duty awards go to current and past students,” Ellis said. “As we look towards the future, the submarine force will continue to play a significant role in our nation’s current and future conflicts.”