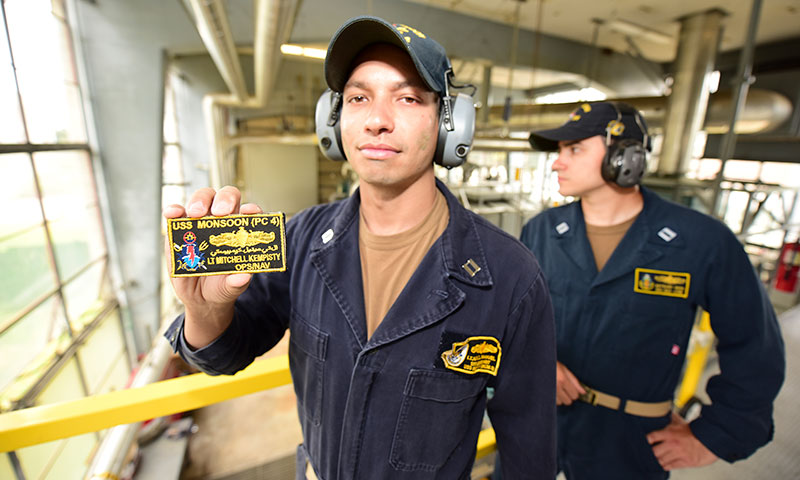 U.S. Navy Lt. Mitchell Kempisty has invented a fire-retardant material backing for nametags and other patches worn on military clothing that hold up to the rigors of daily work. He accomplished the research using his own resources and time while a student in the Space Systems Engineering program.

Using his own time and resources, Naval Postgraduate School (NPS) Space Systems Engineering student Lt. Mitchell Kempisty ventured into unchartered waters to bring an invention of his making through the patent process, an invention which he hopes will improve Navy uniform fabric nametag durability.

Kempisty is something of an overachiever. As an NPS student, he is fully engaged in his thesis, titled “Attitude Optimization of NASA's Lunar Reconnaissance Orbiter in Sun-safe Mode in Order to Minimize Star-Tracker Obstructions from Local Orbiting Bodies.”

But that’s not enough for the Naval Surface Forces’ 2020 Shiphandler of the Year, who says he saw an opportunity for improvement while serving on two ships where he noticed a lot of wear and tear with the name tag patches on shipboard working uniforms, especially those that use hook and loop to stick to coveralls and work shirts. Coincidentally, Kempisty’s former ships were both used as Navy testbeds for the newest of flame-retardant shipboard clothing in 2019, the two-piece Type III NWU (Navy Working Uniform).

“An issue that all Navy Sailors deal with are their nametags on their coveralls, and now on the new NWU, quickly becoming disheveled and unprofessional looking,” noted Kempisty. “I came up with a patentable idea that provides industrial reinforcement of the hook and loop on the patches to protect it and keep it looking professional.”

The patent title is "Industrial Reinforcement for a Wearable Identification,” said Kempisty, but he calls his patch backing invention uGuard.

The backing material for the patches are a fire-retardant carbon fiber and nylon blend with appropriate flexural rigidity that offers both wearable comfort and resilience. The backing Kempisty invented protects the soft wearable patch during extensive manual labor.

While Kempisty is a master’s candidate in aeronautical engineering, he realized the best way to prototype his invention was to dive into the field of additive manufacturing. He purchased an inexpensive 3D printer and learned to use it.

“Once comfortable with 3D printer operation, I then modified almost all the components to fit my exact needs,” said Kempisty. “I also learned Computer Assisted Design (CAD), using my own AutoCAD license. Once exact specifications were determined and designed from CAD and 3D printing, I created my first set of real-life products.”

Now that he had a product in hand, his next step to getting into the hands of the warfighter was a patent. For this, Kempisty turned to an attorney friend in San Francisco, who worked out a meeting with his firm’s patent lawyers, who saw promise in the product and helped draft his patent application for the U.S. Patent and Trademark Office (USPTO). The move proved fortuitous for Kempisty, saving him time and money in what could have been a lengthy and expensive process to receive a patent.

With a patent number for his product in hand, Kempisty pushed ahead into another unfamiliar realm of the process: mass production and manufacturing. Luckily, Kempisty not only found a manufacturer for his durable and fire-retardant patches, he found one willing to guide him through the mass production process.

“The president of the company was very understanding of the fact that I have never done anything like this before and guided me in the negotiation and setup of producing a full manufacturing line for the product,” said Kempisty. “I am also proud to say that this product is fully designed and manufactured in the USA.

“My ultimate goal right now is to gain an audience with the Navy Exchange Command to get the [name tags] stocked in the uniform store,” he continued.

If things go well, Kempisty wants to look into expanding the product line to include protection of circular patches for pilots.

“Doing everything by myself at my home computer has forced me to learn quite a few skills and have taken up a lot of my free time, but if I can get to the finish line, it will all be worth it. It also opens the door for many more opportunities to come,” added Kempisty.

As a budding entrepreneur, he started the project knowing little about additive manufacturing, the patent process, and mass production and distribution. Yet, he figured it out in his spare time as a student in the Space Systems Engineering program.  In case you are wondering what Kempisty is doing during his working hours, he’s fully engaged on his thesis titled “Attitude Optimization of NASA's Lunar Reconnaissance Orbiter in Sun-safe Mode in Order to Minimize Star-Tracker Obstructions from Local Orbiting Bodies.”