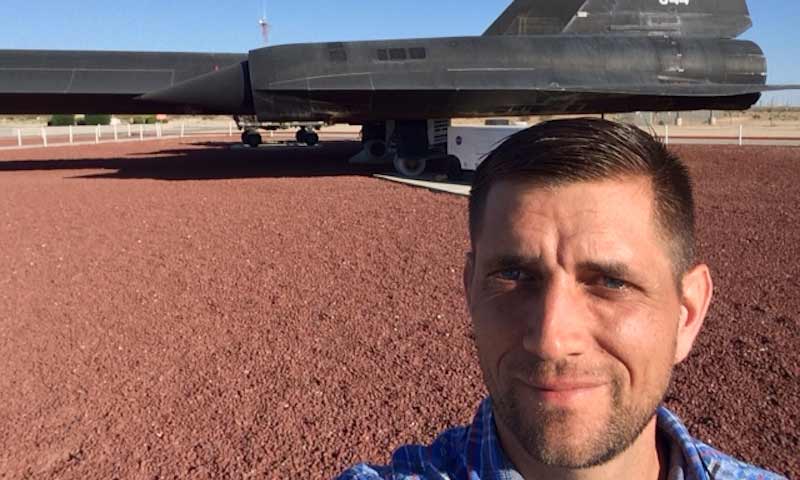 U.S. Navy Lt. Todd Coursey’s summer will be spent at NASA’s Armstrong Flight Research Center in Edwards, Calif., where he is participating in a rare directed-study internship with the space organization.

A Naval Postgraduate School (NPS) graduate student has boldly gone where no NPS physics student has gone before.

Navy Lt. Todd Coursey recently embarked on a quarter-long internship this summer with NASA at its Armstrong Flight Research Center in Edwards, California, to supplement his applied physics curriculum. He is the first such student to do so, and his internship has the potential to significantly expand NPS’ research horizons.

“Todd took a quantum leap in going to NASA,” said NPS physics professor Ray Gamache. “I don’t think anyone has ever done this before. It’s a great idea: go to another place that’s completely unknown and work there, assess, understand how things work; this is just priceless.”

Over his three-month internship, Coursey and his NASA team are experimenting with various materials for a new generation of fiber optic cables which optimize performance at cryogenic temperatures.

In providing real-time monitoring of a range of key engineering data, the fiber optic sensing systems which will employ these can revolutionize not only future rocket bodies, but aircraft, energy and transportation infrastructure, and medical surgeries, according to NASA.

“We’re basically dropping different kinds of coated fiber optic sensing cables into a small cryochamber – about the size of a fire extinguisher – and then reading the raw data to see which ones are most effective and efficient,” Coursey explained. “From there they’ll do the systems development and look at incorporation.”

The internship is a natural continuation of Coursey’s studies at NPS.

His graduate work in applied physics – his thesis will be on the acoustic detection of drones – will be amplified by his hands-on experience at NASA, says NPS physics professor Frank Narducci, who is providing Coursey with directed study so he can satisfy the optics requirement of his curriculum while doing the internship.

“When Coursey first approached me with this opportunity at NASA, I asked him ,‘How is it that you have an entire quarter when you don’t have to be here?,’” Narducci said. “When students come to NPS, their class matrix is pretty packed; it’s very hard to get any wiggle room. But Todd, knowing that this was a possibility in his future, front-loaded some of his courses so that he could clear out the summer.”

Yet the singular course load is hardly a cake-walk.

With his master’s research looming over him, Coursey voraciously works through the readings Narducci assigns in addition to the work he is doing at NASA.

Coursey embraces the challenge, however, and remains deeply engaged with his work and studies.

“When you come to NPS, you’re there obviously for the academic work, but it’s another thing to get experience,” he said. “Coming to NASA is a great way to learn about what other organizations are doing, how they’re approaching problem-solving internally and how the project teams are put together.”

“So it’s not just academics that I’m learning here,” Coursey added. “I’m learning a lot about the culture at NASA which I think would do really well to bring back to the Navy.”

In a way, the NASA internship represents a sort of homecoming for Coursey. Growing up in nearby Palmdale, California, test flights of the SR-71 Blackbird, the F-117 Nighthawk and the B-2 Spirit operating out of Edwards Air Force Base were a staple of his childhood.

Most salient to him, however, were NASA’s space shuttle landings.

“It used to land out here on the dry lake beds before they moved it over to Florida,” he recalled. “As it came in, there was a huge double sonic boom, almost like an earthquake. It was surreal: right outside my window there’s a huge compass rose burnt into the desert floor which the space shuttles would use to navigate when they would come in; it’s still there.”

The space shuttle landings left an indelible mark on Coursey’s imagination which propelled an interest in physics throughout his life – and Navy career.

While conducting research on the Internet, he came across NASA’s complex aircraft program called the Preliminary Research Aerodynamic Design to Lower Drag (Prandtl-D), intended to eventually be the first in-air rover on Mars.

“I said, ‘Oh, cool! They have a UAV shop that’s in tune with what I’m doing at NPS,’” he said. “Maybe I can go out there and check it out and see what they’re doing.”

So Coursey contacted NASA and arranged a day-long tour while home on leave in the summer of 2017. While there, he noticed they had interns; intrigued, he returned to NPS.

“I talked to the physics department, my project officer and my academic advisor to see if working at NASA over the summer was a possibility,” he said. “They were full throttle very excited about it and said if it works, they’d fully support me.”

It did work. Coursey applied for the NASA internship program, with Gamache writing a letter of recommendation and Narducci agreeing to conduct the independent study. Coursey was accepted and began his work at NASA in mid-June.

“This was my moon shot,” Coursey said, referring to President John F. Kennedy’s 1962 speech declaring America’s ambition to land a man on the moon. “I was out here, I knew they had interns, and without the support of NPS, this wouldn’t have come through.”

“It was very forward-looking on his part,” Narducci said. “We can do all the book-learning we want, but it never works that way in real life.

“We always teach the ideal, ‘Well, in a perfect world, if you do the experiment in a vacuum, it always works that way.’ Now he’s in an environment where things are not perfect, where the question becomes, ‘How do we make this work anyway?’ and that’s extremely valuable.”

When Coursey graduates this December, NPS will have produced a more experienced, better prepared student. The internship also opens the door to future collaboration between NPS and NASA, Narducci said.

“We’ve got people doing a similar type of work,” he said. “Now he’s established that connection for us.”

Seeking interdisciplinary collaboration has become the norm in applied physics, but Coursey has taken this to the next level, Gamache said.

“What Todd did that no one else has done is to take that jump, not just to the Navy, but to NASA,” he said. “Todd may see that the structure of how they run their scientists and projects is completely different from the way that we do it in the [Department of Defense], and so he’ll have a base of understanding of other government agencies outside of the Navy.

“Wherever he goes after this, he’ll be able to share these different concepts and different ideas with them; it’s very much a synergistic effect,” he added.

After he completes his internship in August, Coursey will be sharing his experience with the NPS community. On Friday, September 28, he’ll spearhead the physics department’s Fall Quarter Colloquium Series, which will be open to the general public.

“I think it’ll be great because all of a sudden one of our speakers in the colloquium series is not ‘the world-renowned expert in X, Y or Z’, but one of us,” Narducci said. “I think he will have a lot to tell us about his work at NASA.”

For his part, Coursey is grateful for the opportunity to work at NASA.

“I’m just fortunate to be here, and I hope that I can share what I’ve done here and allow other students to pursue something like it,” he said.