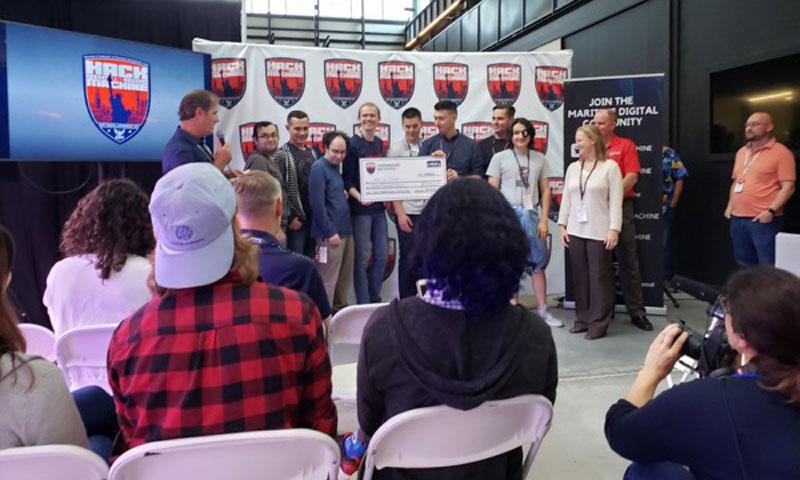 A group of participants, including several from NPS, is recognized during the latest HACKtheMACHINE event in New York City. Thanks to the efforts of NPS’ Consortium for Robotics and Unmanned Systems Education and Research, a team of 22 students and faculty got hands-on experience in solving Navy-relevant problems through the popular hackathon event.

With the help of NPS’ Consortium for Robotics and Unmanned Systems Education and Research, or CRUSER, a force of 21 Naval Postgraduate School (NPS) students and faculty attended the latest HACKtheMACHINE Navy hackathon held at the Brooklyn Navy Yard in September. Now in its fifth iteration, the event brought together more than 600 people from across military, government, academia and industry to tackle some of the Navy’s most complex problems.

“What CRUSER has to gain is that our mission is to shape future generations of naval officers and their experience with robotics and autonomous systems,” said Brian Bingham, the consortium’s director. “I think this is one way that we can directly achieve that mission by having our students go out and get a wider aperture view of what's going on both in academia and industry.”

All NPS students who are members of the CRUSER network are eligible to apply to their travel program in a very simple process where, according to Bingham, students just need their advisor approval on anything that has a strong tie to robotics and autonomous systems.

“Supporting student travel makes up a huge part of CRUSERS role in supporting the student body, whether it be field experimentation or conferences to present their work,” Bingham continued. “What we saw in HACKtheMACHINE 2019 is that many of the tracks they were doing had a heavy emphasis on cyber systems.”

Bingham said one of the few caveats of CRUSER sponsored travel is for participants to give a presentation on the benefits of the experience to other members of the CRUSER network, and on Oct. 7, at the campuses Mechanical Engineering auditorium, Graduate School of Defense Management student Lt. Rich Rodriguez, Military Faculty Member for the Computer Science Department Army Maj. Michael Senft, and Graduate School of Engineering and Applied Sciences student Matthew Henricks, did just that.

“I was part of the educational track, and even though I do have a computer science background, it has been ten years since I have done anything with it, but too much of my surprise it all came back to me,” said Rodriguez. “I was able to learn a lot, from breaking into and tracking networks, to dealing with network traffic and a lot of it was conventional and highly useful.”

Rodriguez participated in the first of three tracks that the hackathon had to offer. Entitled “Hack the Ship,” the track offered participants both an educational and advanced option, where they simulated a unique maritime capture-the-flag experience and had the opportunity to hack a newly developed cyber defense for industrial control systems. A collaborative team of NPS and New York University participants would go on to place second in the advanced track.

“It was really eye-opening to see the level of skill that is out there,” said Rodriguez. “On my team, we had everything from people interested in computer science, to engineers, to tech geeks, and that really showed in the group dynamic.

Despite receiving his undergraduate degree in computer science, Rodriguez has served his time in the Navy as a supply corps officer, with his current course of study focused in financial management. He viewed HACKtheMACHINE as an opportunity to become better equipped in an ever-changing technological world.

“It is imperative for us as naval officers today to develop these skills to be able to know what the threats are, and just like we’re integrating cyber security into our acquisition systems we have to integrate it into our operating mentality,” he said.

Rodriguez went on to further stress that, “In my particular field of financial management, we are witnessing development of computer systems that can do everything we need them to do, that will soon be integrated fleet wide. Being exposed to this really helps me prepare for the future.”

The second HACKtheMACHINE track was entitled “Data Science – Cleared for Takeoff,” which challenged competitors to identify patterns and correlations across two data sets related to aircraft maintenance data to help the Navy learn whether data science and machine learning can predict maintenance problems before they happen and keep aircraft in the air longer.

“My team for the competition consisted of a diverse group of individuals working across government and commercial sectors,” said Senft, who, along with 150 other participants attended the Data Science competition. “I was one of the older people in my group and it was interesting to experience the generational dynamics from the military side of working with a team of both college students and ones who have been in industry for a while, so you had this group of people from totally different backgrounds and generations coming together and brainstorming over the course of 16 hours.”

Though starting his military career in logistics, Senft crossed over to network engineering in support of joint and special operations forces before coming to NPS to earn his master’s degree. After serving a tour in strategic human resources and intelligence, Senft returned to NPS as a military faculty lecturer within the Computer Science department in August.

“This was an excellent opportunity for me having had an interest in leveraging our network graphs for anomaly detection,” said Senft, “and this provided an interesting case study in being able to essentially ingest and detect anomalies across really millions of rows of data.

“The way I look at it is you have different tools within your toolkit. Hammers are good for nails, screwdrivers are good for screws, but what makes this kind of event special is it leverages each kind of problem solving tool that you have available to you,” he continued. “You come to the challenge bringing a methodology to solve the problem, and then you are essentially in an open competition with your teammates in finding the best approach.”

The third and final track was entitled “Digital Manufacturing — Rendering Aid” which simulated a vessel stranded at sea and had participants both assess damages and develop solutions using 3D printing technology.

“The track was actually done two parts,” said Henricks, who participated in the track. “The first part was onsite and that's where we came with the damage report to discuss all of the issues, and then the second part is ongoing right now as judges are looking at the actual solutions to the problem. So what we did over the course of the 36 hours that we had for the competition is we took a look from our understanding of how to report damage from our experience from the Marine Corps, Navy or NAVSEA.”

Part of Henrick’s participation in HACKtheMACHINE is due to the track’s heavy alignment with his thesis work, which involves 3D printing of metal materials in order to defend sensitive electronic equipment in microwave specific frequency ranges.

“Being able to see technology on a ship capable to rapidly scan the areas using just your simple cell phone or even to find the data, and having all that raw data and seeing how different people approached it was extremely helpful,” said Henricks. “This is my second time actually doing this competition, last time I did the educational track for track one, and each track gives you perspective that contributes to the fleet in different ways. I highly recommend it for anyone who has a chance to be a part of it.”